Mom’s Last Visit to the Dentist

May 13, 2012/Giv'er Miramichi/Comments Off on Mom’s Last Visit to the Dentist/Arts & Entertainment, Community & Fundraising 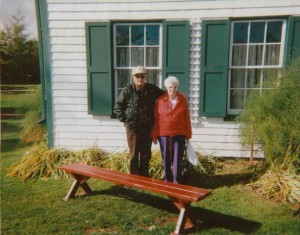 Pauline's parents, Arthur and Nora Coughlan at Anne of Green Gables home in PEI before they became ill and needed home care.

One Saturday night in early July 2004 I went over to stay with Mom and Dad. It was a beautiful summer evening and I remember how bad I felt having to spend it inside instead of home on the deck (just a little of the guilt I feel now).

Anyway, for about the first hour or so Mom did nothing but complain about her loose tooth. She kept saying, “I don’t know how you expect me to eat anything with this old tooth!” It was really the only bottom tooth she had left and she kept trying to pull it out with her fingers.

Finally Dad said, “Do you want me to pull it?” Now Dad had been near death in April and I couldn’t imagine that he would have the strength to do much of anything, but when Mom said, “Yes, pull the damn thing!” he wasted no time getting to the kitchen.

I followed along behind him because he was unsteady on his feet and we were afraid he would fall. He went to the junk drawer in the kitchen and pulled out the pliers. I said, “Dad, you’re not really going to pull the tooth, are you?” He just nodded his head and smiled as he headed back to the big La-Z-boy chair where Mom was sitting.

I’m telling you, I was like an expectant father pacing around the kitchen.

He planted his feet on the floor and pulled. Mom screamed and moaned … and I paced. Mom’s protest must have got to Dad because he stopped and took the pliers out of her mouth. He handed her a Kleenex and she wiped at her face.

“Look at the blood! I know I’m going to bleed to death right here tonight!” she said.

“No, no, just pull the damn thing,” was her reply.

He started to pull on the tooth again and I started my pacing. Visions of the ambulance arriving to take Mom to the hospital ran through my mind. What kind of a caregiver would allow someone to use pliers to pull their own mother’s tooth? Not to mention what my sisters Donna and Valerie would say if anything happened.

Dad must have got his second wind because he gave one good pull and out came the pliers–tooth and all. I can still see the tiny roots that tooth had.

I said to Mom, “Quick! Pack it with Kleenex to stop the blood from running down your chin.”

Dad just scuffled along out to the garbage can and dropped the tooth. Then he scuffled along back in to his La-Z-boy and pushed it back to relax. He said to Mom, “Stop complaining now. It would have cost us a hundred dollars to have that done at the dentist office.”

I laughed and said, “The old guy still has it in him.”

About three weeks later I went back to do my Saturday night time again. We were sitting watching Lawrence Welk on TV when Mom said, “You know, one of Arthur’s teeth fell out this week.”

It gave new meaning to the Bible saying, “A tooth for a tooth.”

Written in the wee hours of the morning on June 18, 2005, while sitting with Mom at Miramichi Hospital. My mother, Nora Coughlan passed away on June 19, 2005.

Pauline Underhill of Barnettville, NB is the mother of four (Kellie, Sherry, Jennifer and Lee) and the grandmother of five (Paulina, Samuel, Jules, Abby and Anna). Both her parents, Arthur and Nora Coughlan of Gray Rapids, NB have passed away.