MIRAMICHI – There’s a great run on…..of Black Flies and Mosquitoes. That’s the bad news. Now for the good. The “bright season” is beginning to unfold. There are decent numbers of fresh sea trout and a smattering of bright salmon in the Miramichi system. Rain over Tuesday evening /Wednesday will freshen the rivers. 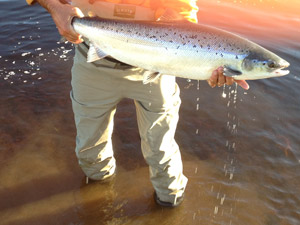 Wed. May 23 in Blackville by Jason Curtis

W. W. Doak and Sons in Doaktown said there were sea trout just starting in the Blackville to Doaktown area on Tuesday. Most were in the 18-inch or two-pound range. There were no substantiated reports of bright salmon, but they felt by this weekend, some brights should be seen. Water conditions were slightly high, but good over all.

Flies of choice were White Wulffs, Light Cahills and Muddlers for trout. Some were also fishing Butterflies and White-tailed Green Machines for both trout and salmon.

Derek Munn of Ledges Inn in Doaktown and Mountain Channel in the Rapids area said he’d heard of one unconfirmed bright salmon above Boiestown, and that sea trout were being caught in the Blackville area. He felt they should be moving through Doaktown very soon. Water conditions were described as good. They also had very good fishing at their two private lakes with trout averaging between 14-18 inches.

Flies of choice were White-tailed Green Machines, Muddlers, and a selection of dry flies.

Herb Barry Sr. of Herb’s Fly Shop on the Station Road in Blackville said he’d heard of the odd bright salmon, but He hasn’t seen any. The water was slightly high, but anglers were picking up sea trout in the 12-14 inch range. Jason Curtis released a beautiful bright salmon in the Blackville area Wednesday evening.

Curtis Miramichi River Outfitting in Blackville said there were lots of sea trout in the Quarryville/Rapids area over the weekend, with catches in the 2 to 3-pound range. Water temperatures and levels were good. They’d heard of a few salmon being reported on the Northwest Miramichi.

George Routledge of George’s Fly Shop at the Mouth of Renous in Quarryville report excellent sea trout fishing on Sunday. Routledge said they were starting to get a few on Friday and Saturday, but Sunday was super.

“It was the best sea trout run I’ve seen in years. Most were in the 14-16 inch range and weighed about two pounds. A friend gave me one and it was as sweet as could be” said Routledge. However, on Monday of this week, it seemed the run had passed through as none were caught.

Prior to that, a week ago this past Tuesday there was a salmon reported close to Wanda’s Shore on the Main Southwest, one Wednesday at Kenny Hayes’ Tuesday on the Renous, two on the Renous Thursday, one at the old bridge peers and one at Hayes’, and then none. Routledge figured it was because of the sea trout run.

“Trout and salmon do not like each another, so I figure that that is why the salmon reports stopped” said Routledge.

Jim Laws of Miramichi Hunting and Fishing in Newcastle, Miramichi reported slow angling, but had heard of a salmon being caught on the Northwest. However, there had been a decent run of sea trout in the Miramichi area with a couple almost as large as grilse. The stripped bass incidental catches had basically stopped as the fish had moved into the spawning area in the Northwest, primarily below the Red Bank Bridge. Water conditions were good.

Flies of choice were White-tailed Green Machines and Black Ghosts, and even a few streamers for salmon while trout anglers were requesting Muddlers and Wooly Buggers.

Earlier this spring: Bruce Tripp with his first salmon ever measuring 35 inches. Caught April 15 in Red Bank on a blue smelt. Took the rookie 30 min to get him in.

Syd Matchett of Trout Brook Fly Shop on the Northwest Miramichi said the “bright season” had started, but was slower than what anglers might like it to be”. There were some sea trout reported last Friday and Saturday, but no significant numbers. There were two unconfirmed reports of bright salmon before the weekend. On Sunday May 20 at 4:30 pm Rick Miller hooked his first salmon of the season with a Cosseboom on the Northwest. It was 32 inches long and weighed approximately 12.5 lbs. He and a couple of friends released it to continue its journey. “. A beautiful start to a fresh season”, said Miller. Jason Curtis released a bright grilse on the Northwest on Wednesday.

A lady also lost a bright salmon on the weekend. Matchett said that the annual Red Bank Trout Derby was held last weekend. Catches were average, but 90 % were black trout.

Flies of choice were No. 6 White-tailed Green Machines, Black Ghosts and Cosseboom.

Debbie Norton of Upper Oxbow Outdoor Adventures on the Little Southwest Miramichi said she had no reports of any bright salmon on the Little Southwest and no sea trout. The smolt out-migration was coming to a close, and the river was full of stripped bass around Red Bank. The smelt run was over, and she was looking forward to this week for bright fish. She said the water had been dropping like a rock with the warm weather on the long weekend. The fiddleheads were nearly past.

So as we move toward the end of May with the arrival of bright fish beginning, it is time to grab the rod and perhaps the canoe as well, and get out and “on the water”.

Thought for the Week: Sign on shop: “Gone fishin’, be back at dark-thirty!” ~Author Unknown

River-Lore: When the yellow butterflies are here, so are the bright salmon.

RIVERNOTES also includes the May 17 update on return numbers of Atlantic salmon to the Penobscot. Good news there! Read more: http://atlanticsalmonfederation.org/rivernotes/

ANNUAL GENERAL MEETING May 22nd @ 6:30 PM
Be a part of your Community Museum and voice your opinion!

“There is no better way to make a difference in your community than by becoming a volunteer. It’s a great opportunity to share your ideas, talent and experience, build relationships and develop a caring, stronger, more self-sufficient community. Volunteering also presents our youth with an opportunity to learn, network and build their resume for the future.”

Light refreshments will be served!

Space available in all camps!

On the beautiful Southwest Miramichi River

Please be advised that the 59th Annual General Meeting of the Miramichi Salmon Association, Inc. will be held at the Miramichi Salmon Conservation Centre, 485 Route 420, South Esk, NB on Saturday, June 9th, 2012 from 11:00 AM to 12:00 noon. Minor constitutional changes will be brought forward dealing with the date of the AGM and the status of Honorary Members and Directors.

The venue of this AGM was changed to allow all members to stay afterwards to enjoy a barbeque and tour of the new hatchery, a very impressive facility that many of you have not had the opportunity to visit yet. All members are encouraged to attend and bring a friend; we would be very pleased to have you join us and look forward to your confirming your attendance.