Generally, angling was slow across the system, with a spattering of bright fish here and there, but no concentrated run.  The weather from Sunday on has also been a contributing factor with few anglers out in the cold, windy, rainy and drizzly conditions.  The one bright spot was the Juniper area of the Main Southwest, where the sea trout were providing good fishing.

A reminder that as of June 1, 2012, all angling above the Wayerton Bridge on the Northwest Miramichi, above the Square Forks on the Sevogle and above Catamaran Brook on the Little Southwest is catch and release.  Hooks can be barbed, but check the regulations for clarification on some of the Crown Reserve Stretches where Hook and Release had been practiced for some time, and required barbless hooks. 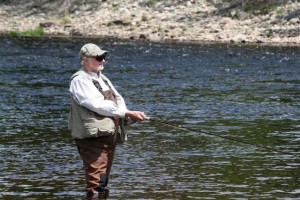 As well, with these regulations, anglers are well advised to respect trespassing on private property without permission.  Dont assume you have the right to go where you please.  Be courteous.

Doug Whites Tammerack Sports Fly Shop in Juniper said the fishing was good over the weekend with sea-trout being the main target.  There was one salmon caught and released on June 2. The water is dropping off which makes for good trout fishing, but not so good for salmon.

W. W. Doak and Sons in Doaktown said angling was sporadic with reports of a salmon in Blissfield, one in Upper Blackville, and a couple at the Mouth of the Cains.  The Cains was also producing decent sea trout as well.  Water conditions were ideal, but cold.

Flies of choice were Shady Ladies, Butterflies and White-tailed Green Machines for salmon, while trout anglers were using Muddlers, Wooly Buggers and May Fly hatches.

Derek Munn of Ledges Inn in Doaktown and Mountain Channel in the Rapids area said angling was pretty slow with the only the odd fish being caught here and there.  A good raise of water would be welcomed, especially on the Northwest Miramichi.

Herb Barry Sr. of Herbs Fly Shop on the Station Road in Blackville said anglers were getting some fish, but the numbers were not great.  One angler hooked a salmon and saw a grilse jump on Friday.  There was also a report of a salmon at Deans Bar in Blissfield and a grilse at the Dungarvon Bridge.  There were a few others hooked and lost here and there.  Basically, there were no trout reports to speak of.

Flies of choice were White-tailed Green Machines, Shady Ladies, Green-butt and Red-butt Bear Hairs and Glitter Bears, along with a few Rusty Rats.

Curtis Miramichi River Outfitting in Blackville said angling was slow with only a few being caught here and there, including the odd grilse.   The Upper Dungarvon was producing some decent trout fishing.  Water conditions were good and certainly cold. They were hoping the full-moon tides would bring more bright salmon into the system this week.

Flies of choice were White-tailed Green Machines, Carters Bugs, and the odd Bomber, along with Muddlers and Royal Wulffs for trout.

George Routledge of Georges Fly Shop at the Mouth of Renous in Quarryville said angling there was poor, but had heard of two salmon and three grilse caught above the Pineville Bridge in the evenings when the wind died off some.  Water conditions were a little high.  There were no trout reports.

Jim Laws of Miramichi Hunting and Fishing in Newcastle, Miramichi reported hearing of the odd salmon and even the odd grilse being caught here and there, but in no concentrations.  Water conditions were improving on the Northwest, but the river could use a really good raise in water.  The Main Southwest was fairly quiet with only a few reports of hook-ups.  There were no trout reports.

Flies of choice were White-tailed Green Machines, Shady Ladies, Undertakers, Black Ghosts and Butterflies, along with Muddlers for trout.

Syd Matchett of Trout Brook Fly Shop on the Northwest Miramichi said the weather was so cold, windy and miserable that there were few anglers out.  There were a few hit and miss reports of salmon and grilse.  Over the past two weeks, there were about 12 salmon hooked on the Sevogle, but basically only a spattering of fish.  Water conditions had improved a little, but more rain in that respect would be welcomed.

Debbie Norton of Upper Oxbow Outdoor Adventures on the Little Southwest Miramichi said angling was slow with only a trickle of bright fish moving through.  Anglers were picking up the odd bright salmon and grilse and a few pan trout, but there was nothing to rave about.  The water was a decent level, but cold.  The out-migration of smolts was over and the trap nets at Cassilis and Millerton are now in the in-coming counting mode.  She was just waiting for the big runs to start.  Last week they played host to a group of kayakers.

Flies of choice were Butterflies.

Hopefully, this week will see an improvement in the numbers of bright fish entering the system which will make it a pleasure to be out and on the water. 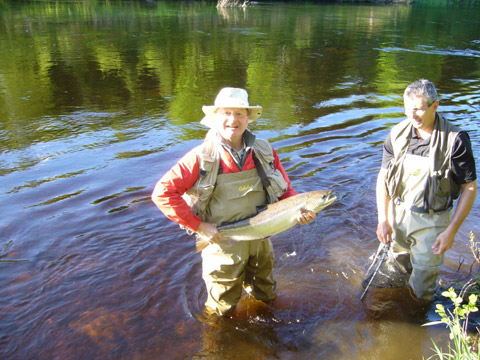 A bright salmon landed near Juniper by Randy Campbell of Royal Road, Fredericton on June 1. He said he's been at this for many many years and this is the earliest he has ever landed a salmon so far upriver on the Miramichi. "What a beauty and a great fighter, and a pleasure to return it to the river as fast as possible." said Campbell.

Don’t forget to show your support for our sponsors, because without them, this column would not be possible.

Drop in Bryant Freemans Eskape Anglers in Riverview to stock up on streamers for spring angling as well as any other equipment you may need such as a Reddington Rod.

Miramichi City Surplus on the outskirts of Miramichi in the Lower Derby road offers a nice range of rods, reels, tackle, bait and other outdoors supplies and hunting needs.  Be sure to also bring along your recycleables.

Thought for the Week: Fishing is much more than fish.  It is the great occasion when we may return to the fine simplicity of our forefathers.  ~Herbert Hoover

RIVER-LORE:  Oldtimers used to say when the lilacs were in bloom, that was the best time for bright salmon.  (Contributed by Glenn Russell) 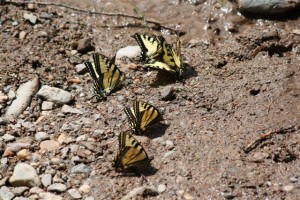 If the river-lore about Yellow Butterflies is true, there should be fish as Dave Ingersoll aptly captures a cluster of yellows on the Northwest Miramichi

This past Sunday the MVHS Fly Fishing Club celebrated Fish NB by spending a day on the Northwest Miramichi.  We had two large groups fishing the water between the Miners and Wayerton bridges.  A group of 7 grade 12 club members left the school at 5:30 am to canoe and fish the stretch of water from Miners bridge down to Allison’s camps.  The water was extremely low, which made the paddling quite interesting.  We did not get into any salmon but we did hook into some small brook trout and salmon parr.  Thanks goes out to Dale Taylor and Jeff Wilson for guiding the students through the pools.  A group of 9 club members left the school at 7:30 am to fish the pools in the Wayerton bridge area.  Kevin Ross showed his group, which consisted of his son Kyle with fellow grade 12 members Jacob Ashton and Thomas Sturgeon, how to hook into an early June grilse at Trout Brook.  This was our only tight line of the day.  Thanks goes out to Kevin, Keith Comeau, Rick Hayward, Jason and Jennifer Curtis for providing their guiding services.  All of the club members were able to practice the lessons that have been taught within the club and enjoy the moment of being on the water.  We are planning another trip in mid July to the Main Southwest Miramichi.  This is our 5th season and we had the largest club membership to date…19 students.  I encourage your readers to visit our website to check out the club updates and view our pictures/videos.  I have attached a couple pictures from our trip… 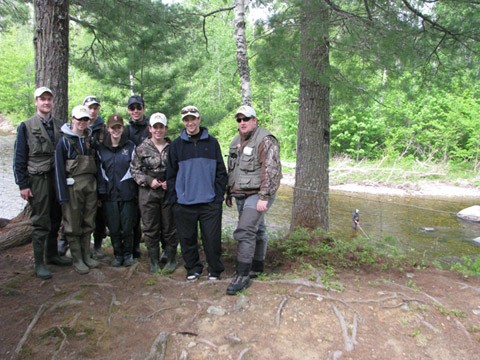 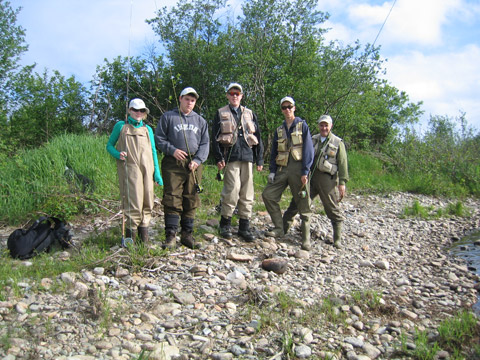 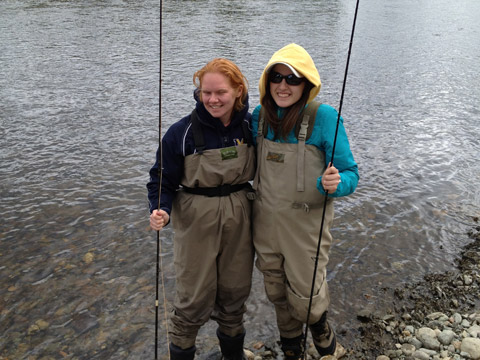 I was just talking to people in Juniper (May 31) and they said 75 sea trout came to the barrier since yesterday.  Gary Jones,  NACKAWIC

Very Important International Meeting on Atlantic Salmon
~~~~~~~~~~~~~~~~~~~~~~~~~~~~~~~~~~~~~~~~~~~~~~~~
NASCO is like the United Nations of Atlantic salmon countries. The outcome of its annual meeting next week is especially critical – if a commercial quota for Greenland is approved, then it will jeopardize the present upswing in large salmon numbers that is giving an important impetus to restoration of the runs toward historic levels. Read more
http://asf.ca/news.php?id=878 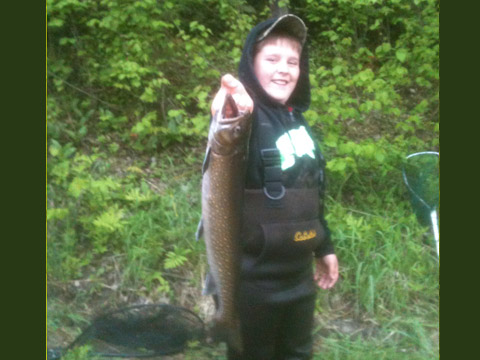 One lucky young angler with a beauty of a sea trout caught in Juniper. Submitted by Dwain Burpee

Any prolonged closure can have a negative impact on those who care about the rivers, on the benefits to the economy of the recreational fishery (recently evaluated as worth $4.4 Million and providing 123 fulltime jobs annually), and on the monitoring of Atlantic salmon in those rivers.

It is imperative that DFO act quickly to resolve this issue in a manner that respects the Supreme Court of Canada’s decisions on aboriginal rights yet also recognizes the important contributions that the conservation minded anglers make in the conservation and restoration of the species.  The Margaree River met 500% of its conservation targets for wild Atlantic salmon in 2011 and can sustain well-managed fisheries with reasonable retention limits for First Nations as well as recreational fishermen. The same is true of other rivers open to angling.

The recent rebound in wild Atlantic salmon stocks is in no small part due to the hard work of conservation-minded anglers that are found on Nova Scotia’s salmon rivers during the season.  They give of their time and money to restore salmon populations.

We would urge ASF members and others  to telephone and/or e-mail each of the following:

Office of the Minister of Fisheries and Oceans – the Honourable Keith Ashfield 613-992-1067, email:

ASF’s Action Alerts are occasional alerts where your assistance can make a difference.