15th Anniversary of the Miramichi Festival of Tall Ships

July 31, 2012/Giv'er Miramichi/Comments Off on 15th Anniversary of the Miramichi Festival of Tall Ships/Community & Fundraising

The tall ship Peacemaker will sail into Miramichi on Wednesday, August 8th to celebrate the 15th anniversary of the Miramichi Festival of Tall Ships. This is the ship’s first stop at three ports of call in New Brunswick. From Miramichi she sails on to Bathurst from August 16th – 20th and then Gaspe from August 23 – 27th.

Built in Brazil in 1986 the Peacemaker is a 150 foot Barquentine with over 10,000 square feet of sail. With a rig height of 123 feet requiring 14 feet of draft the ship’s captain, Larry Clinton, confirmed the Peacemaker will drop anchor at Station Wharf Marina in the Historic Chatham Business District of Miramichi.

The ship will offer tours Friday through Sunday, August 10th – 12th from 10am – 6pm. Boarding fees are $5 for adults, $3 for students and seniors, children 12 and under are admitted free, and a maximum family rate is available for $20. 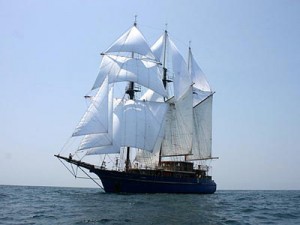 Captain Clinton encourages everyone to visit. “The Peacemaker is a physical demonstration of rebirth, redemption, and dreams fulfilled. Please come to see a beautiful ship, but please don’t miss the life that fills her,” he says.

This event marks the 15th Anniversary of the Miramichi Festival of Tall Ships. In 1997 to the pleasure of thousands of spectators who lined the riverbanks, Miramichi hosted its first tall ship event with the arrival of the Bounty. Since that time Miramichi has hosted many ships such as the Picton Castle, Mist of Avalon, and the Jeanne Johnston.

The Peacemaker is open to onboard receptions after tours and those interested are encouraged to contact committee members through the City of Miramichi Tourism Department at 506-623-2150.

For further information on the Peacemaker please visit www.peacemakermarine.com.