The Tradition of Change

July 11, 2012/Giv'er Miramichi/Comments Off on The Tradition of Change/Arts & Entertainment, Community & Fundraising 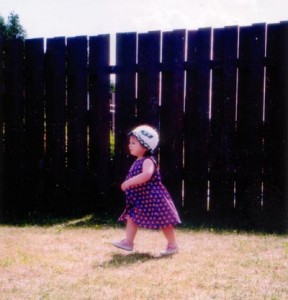 A couple years ago I wrote an article for Bread ‘n Molasses about a tradition in our family. Some of you may recall the story of my daughter, her Canada Day dress and a picture. For those of you who are not familiar with the tale, Sorcha was given a dress decked out with Canadian flags when she was 20 months old. The dress is a sort of tent style cut which means that as long as we can get it over her head, it will fit her.

Every year on Canada Day Sorcha wears her dress and while she holds a picture of herself from the year before wearing the dress, we snap another picture. The dress became less of a dress and more of a shirt by the fourth picture and by the sixth, a bit too snug under the arms to have on comfortably for very long. And even when the dress started to become difficult to put on, the picture was still taken because that’s our tradition.

Last year, we didn’t think the dress would fit, but with a bit of struggling we managed to fandangle Sorcha into the garment. As she smiled dutifully for her picture we assumed that the photo taken on Canada Day 2012 would be quite different. We assumed that more than likely she would be not only holding the 2011 picture but the dress as well.

But we were wrong. The dress still fits. 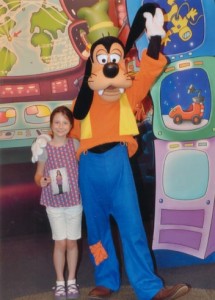 Sorcha in Florida celebrating Canada Day 2012 with her buddy, Goofy.

This year, instead of Sorcha posing with last year’s photo in front of the door in our house, the dress was taken south to Florida and my parents happily carried out our traditional picture taking on Canada Day in Disney World. For the 10th Canada Day in a row, Sorcha donned the beautiful little dress and with her favourite Disney character Goofy, the Canada Day photo was snapped.

She looks happy, she looks older …  she looks uncomfortable. It is quite obvious that this year’s picture will definitely be the last one taken in this manner. We’re not quite sure what we’ll do next year as I in no way wish to alter the dress to fit Sorcha. Like many things in life, change is common and even traditions have to change from time to time if you want to keep them going. Sorcha outgrowing the dress was an inevitable happening and as she changes and grows so will our tradition.

Unfortunately, some changes are ones you don’t expect.

The first picture taken of Sorcha in her Canada Day dress, the one taken in 2003 that started it all, was taken at a Canada Day party in the backyard of the parents of a friend of ours. Our friend’s parents have held this annual party at their place for many years and every year, as the people attending get older, the yard becomes filled with more children and grandchildren, new spouses and new friends.

This year however, the party was not only filled with laughter, children, games, old friends and new, but also with sadness. The host of the party, Pat, had passed away in April. Donna, his wife, wanted to keep up the tradition as it was an event that Pat loved and it was one of the only times of the year that this group of people all got together. Unfortunately, we were not there for it, but we were told that at one point Pat’s son Sean gave a touching toast to his father and everyone at the party had moment of silence for Pat.

In the article I wrote two years ago, I talked about how the picture was not just a tradition, but a reflection of how our lives had changed over the years. It showed the passage of time, the changes in Sorcha and presented to the world our history as a family. Now, the Canada Day pictures that we have taken of our daughter every year for the past nine years have gained a deeper meaning. To me these precious photos now say that while things will change around you and events good and bad will occur that you did or didn’t expect, life is still beautiful and certain traditions, even if they change from year to year, should be and need to be continued.

Pat, this one’s for you.

Cindy Rule is a frequent contributor to Bread ‘n Molasses magazine. She lives in Miramichi, NB with her husband and daughter.