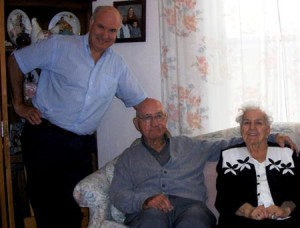 The summer he conscripted me into his labour force of two my dad was 51 and I was 18. I was no stranger to hard work having been raised in a household where a vague quote from St. Paul was often cited, going something like, “No work, no supper”. I was tempted to find the verse in the ancient family bible but was more often bushed from the latest “little job”.

The summer of the work gang project hadn’t started out too well. The mill was shut down for a couple of months and start up didn’t look promising. My parents, not ones to let an opportunity for worry slip by, furrowed their collective brows in anticipation of a lean winter. Dad had a big garden laid out and spent hours coaching young plants up from the warm soil while inflicting maximum damage to errant weeds. I didn’t exactly shower the plants with the same enthusiasm as Dad; going about my assigned duty like a jail guard stuck on a midnight shift. The only redeeming feature of the job was working on my tan.

As most “lads” of my age I was enjoying the end of high school and polishing my metallic green ’69 Chevy Beaumont ignoring the ribbing of my neighbour uncles that I would wear off the paint. In my newly liberated mind I was the racehorse restless for the greener pastures of opportunity anywhere but here. My dad’s view of me was slightly different, seeing something closer to a Clydesdale, able and strong and ready for the harness. I guess looking back on my life, his perspective proved more telling then my own.

Dad announced his grand scheme during supper one evening in his usual abbreviated fashion. He planned to cut off pilings left from an abandoned wharf not far from our home. Hindsight would say it would have been the time for me to bolt, claiming a need to go to the local hang out, Marg’s canteen, but the seeds had already been sown by Mother who had prepared one of my favourite dishes. I was a lamb ready for the shears as the plot unfolded before me.

In the early ’40s, sawmills were strung like confetti along the banks of the river. Often they would collapse or burn and in the case of the one at the end of Rodney Green Lane, all that remained was the skeleton of a shipping wharf. Dad hatched a plot to cut off the tops of the posts once used as a foundation for the wharf. In theory, a clever way to reduce the amount and cost of winter wood but in practice, like many of my dad’s schemes, it had a fatal flaw.

Before I go much further, it would help if you understood a bit more about my father. He was a man with some “book learnin’”, as the locals would say. He was a wiz with a pen but lacked the hands on ability of his brothers.

Another of his qualities was that once his mind was set on a course the only thing to reset it would be the second coming. He was a thoughtful but stubborn fellow. He was a community leader and had more than one run-in with folks who held counter opinions. One example was a group determined to establish a volunteer fire department. He was equally determined not to have it. It was a cause for some lively public and sometimes not so friendly debate. He lost.

Back to our story, you find us struggling with the carcasses of hundred year old sun dried logs semi-submerged in sludge—not a pretty picture. The smell was worse.

There stood Dad teetering on a semi-sturdy platform, his tongue sticking out of the corner of his mouth; for balance I wasn’t sure. A yank of the ancient power saw cord followed a few curses and a restart. We were in business!

I figured I was in pretty good shape from handling the 500 plus pounds of baled paper we loaded on freighters destined for distant ports. It was great money and as young lads many a night was fondly passed under a starry sky nursing a quart bottle of ice cold Moosehead beer. I digress. Back to the business at hand.

I was assigned the role of “chief loader and wheel barrow operator”. The wheel barrow was ancient and of course not maintained. It was a relic from dad’s father. I loaded several of the fossilized pieces onto the rickety device which featured a steel wheel forged by a sadistic blacksmith. The weld, joining the two metal bands, left a lump which was enough to constantly throw the operator/me off balance. The wheel fought to escape its place and I secretly wished it would. But no luck. I trundled down the street like an amiable drunk trying to prevent the load from spilling and making me look a greater fool than what I felt.

We kept up a steady pace for three solid days, sunrise to setting. The only respite was to devour Mom’s tasty lunches and suppers. At the end of our labours a sizable amount of “free” firewood sat like bleached dinosaur bones in the backyard. Early fall, before I went off to the greener and faraway pastures of university, we split the works by sledgehammer.

So what does a person take away from an experience that causes him to capture it over 40 years later? It is something well beyond raised blisters and strained muscles and sunburned skin.

It is an understanding and appreciation for the value inherent in hard physical labour and it’s about realizing how qualities like work ethic and determination are passed from father to son. We laboured, took the measure of the other and found nothing wanting.

On a freezing cold night in January Dad, Mom and I gathered with neighbours and friends to watch tongues of flame shoot from the chimney of my parent’s 101 year old house. The tops of the pilings treated with creosote to prevent rot were burning like roman candles. Dad’s gazing at the fire stopped only for an instant to watch the local well trained and equipped volunteer firemen arrive in time to douse the flames. Lesson learned.

Doug Dolan is a lifelong resident of Miramichi, NB. He has been a member of several community agencies and is employed at the New Brunswick Community College Miramichi campus as an academic manager.