MIRAMICHI – When out and about this Thursday to Saturday at dark, make sure to wear some Hunter Orange, especially if you are off the beaten track and traveling through trails to pools as it is the annual 3-day moose hunt, and many hunters will be out in pursuit of “Swamp Donkeys”.  Maybe even be careful of using flies that are tied up with moose-hair   You wouldn’t want some crack-shot to shoot the fly off your leader!

As we move toward the end of September, there has been some improvement in the number of fish coming into the system.  On Monday of this week, the trap net at Millerton on the Main Southwest Miramichi had 7 salmon and three grilse, 8 and 3 on Tuesday and 7 and seven Wednesday.  However, the Trapnet at Cassilis on the Northwest was zero for the three days.

The mid to lower section of the Main Southwest did receive some decent rain on the weekend, but the upper stretches (Doaktown up) received very little.  The Cains River came up a lot, so hopefully, some fish that have been in the system will move up.

The MSA Hatchery will finish their electro-fishing this week and are in full swing collection brood stock.  While seining pools on the Northwest, hatchery manager Mark Hambrook said that the numbers of salmon, and especially grilse, are down considerably from last year, and on the number of grilse present, he has never seen so many small grilse (2 ½ to 3 pounds, with hardy any in the 4 to 5 pound range). 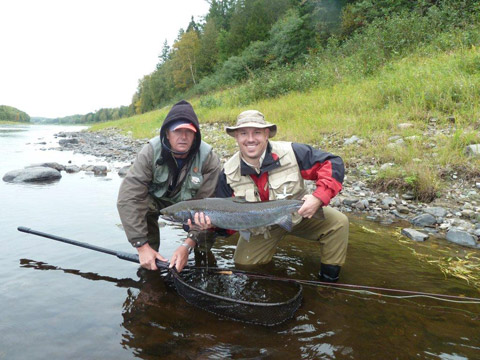 Nice hen salmon taken by Travis at Mountain Channel with the assistance of guide Boyd Curtis.

Doug White’s Tammerack Sports Fly Shop in Juniper said there has been no change in the upper reaches of the river with very little water and no fish.  Therefore, there are no “Flies of Choice”.

W. W. Doak and Sons in Doaktown said they were hearing modest reports on an improvement in the fishing.  Although they missed last weekend’s rain, there are modest numbers of fish being hooked, but not spectacular fishing.  Most fish being caught are dark fish that have been in the system for quite a while, and with better water temperatures are beginning to move and to take a fly.  Water levels remain low.  When all is said, there is nothing to prevent fish from taking, except that they have been in the system a while and are not as likely to take as fresh fish.  Odds are that more will be caught by going to the river rather than bemoaning the lack of fresh fish and low water conditions.

Flies of choice were mostly the Fall patterns such as Ally’s Shrimps, General Practitioners, Copper Killers, along with summer patterns such as White-tailed Green Machines, Glitter Bugs, Same-Thing-Murrays and even some Bombers.

Derek Munn of Ledges Inn in Doaktown and Mountain Channel in the Rapids area said they had about 6 or 7 a day a (averaging one per rod) with most being salmon, but not fresh fish.  The water was low as they did not get last weekend’s rain, but temperatures were good.  Mountain Channel did get a good raise in water, but there were no fish.

Flies of choice were Maribous and small wets such as Conrads and Cossebooms on nos. 8-12  hooks.

Herb Barry Sr. of Herb’s Fly Shop on the Station Road in Blackville said there were some old fish around, but they were certainly not taking well, and Quarryville was not fishing well either.  The water had risen about a foot and there was lots of water for fish, but there very few fresh fish coming in.  Water temperatures were good.

Curtis Miramichi River Outfitting in Blackville said angling was not really good early this week.  The water had come up some and was a good temperature.  Canoeing conditions were good from the Mouth of the Cains River down.

Flies of choice were Ally’s Shrimps, L. T. Specials and Copper Killers, but Bombers were having no luck.

George Routledge of George’s Fly Shop at the Mouth of Renous in Quarryville said angling was very slow with only one salmon caught Monday, none Tuesday morning with 14-16 anglers out and a salmon and 2 grilse in the evening, and none Wednesday.  The water had come up some and was a good temperature.

Jim Laws of Miramichi Hunting and Fishing in Newcastle, Miramichi reported poor angling with very few anglers out.  Most were more concerned with the Moose season this week and the approach of Bird & Waterfowl seasons next week.  The water on the Northwest had come up a bit, but then dropped off quickly.  Temperature of the water was good.

Flies of choice were Dry Flies and Bombers and Fall patterns.

Syd Matchett of Trout Brook Fly Shop on the Northwest Miramichi said angling was quiet.  Most pools had some old fish in them, but they were very hard to persuade to take.  The water had come up about five inches, but was dropping quickly, although temperatures were good.  Syd was planning to go out for a Swamp Donkey.

Flies of choice were Ally’s Shrimps, L. T. Specials along with small wet flies such as White-tailed Green Machines and Shady Ladies on nos. 8 & 10 hooks.

Debbie Norton of Upper Oxbow Outdoor Adventures on the Little Southwest Miramichi said her guests were fishing as there was enough water to actually fish, but they were not doing well.  The exception was Mark Martin from Maine, who had hooked 7 and landed three.  She also had guests in for the moose hunt and for bird season next week.

Flies of choice were No. 12 Undertakers and Glitter Bears, and the Chorus Girl, a Maribou pattern. 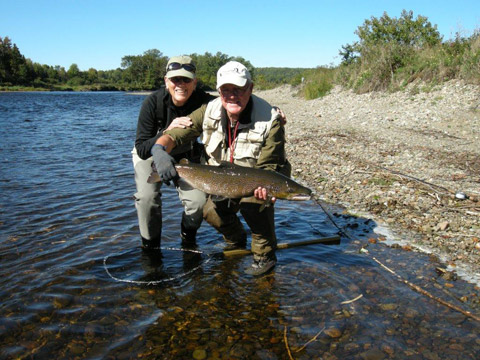 So with the Fall colours starting to show themselves and some fresh fish coming into the system, it is time to get out and “on the water”.

Many anglers will enjoy author Wayne Curtis’ new book titled Of Earthly and River Things: An Angler’s Memoir.  (published by Goose Lane Editions www.gooselane.com)  $19.95.
Author Harry Thurston says of Curtis’ latest book: “Set on the greatest river in the East, this memoir’s bright run of prose dives deeply, rises, and leaps lyrically through these pages like the innocent days and magnificent fish it memorializes.  It is a masterwork grounded in the love of earth and water, family and community, youth and age, dream and reality, by one of our finest writers, “the speaking soul of the river”.

Condolences: Our thoughts and prayers go out to the family and friends of artist Bruno Bobak.  Not only was he an ardent fisherman, but he also captured many fine river moments on canvas, helping to preserve our great angling heritage.

Until next week
TIGHT LINES,
DOUG