The end of Monday, October 15 pretty well brings to a close another angling season on the Miramichi.  The only rivers in the Miramichi drainage that remain open are the Bartibog, Burnt Church and Tabusintac rivers which close at the end of October 29. 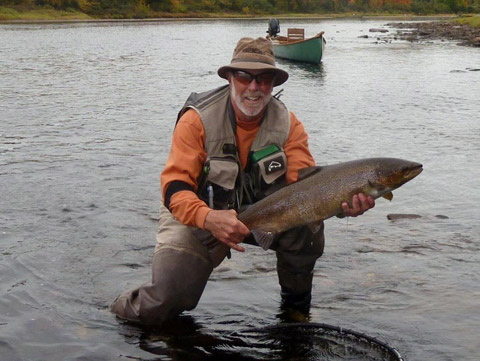 W. W. Doak and Sons in Doaktown said angling was slow with only a few dark fish being caught here and there.  On the positive side water conditions were close to perfect or even a tad high in places.  Blackville received a 15-inch raise this past week, with more rain expected today.

Flies of choice were generally orange patterns such as Ally’s Shrimps and the General Practitioners.

Derek Munn of Ledges Inn in Doaktown and Mountain Channel in the Rapids area said the water was perfect.  They were catching a few; but certainly no great numbers; averaging one or two a day per camp.  They were not even seeing a lot of fish.  The other positive besides water conditions was that the grouse hunting has been good so at least some anglers were enjoying the blast part of cast ‘n blast.

Flies of choice were basically Maribous and Shrimp patterns.

Herb Barry Sr. of Herb’s Fly Shop on the Station Road in Blackville said angling was very slow with just the odd fish being hooked, of those only the very odd one was bright.  The water was up a fair bit in the Blackville area.

Flies of choice were generally orange patterns such as Ally;s Shrimps, Orange Cossebooms, and General Practitioners.

Curtis Miramichi River Outfitting in Blackville said the water was a tad high and anglers were only hooking the odd fish here and there, and they were mostly dark fish.  Not a lot were being seen.  Canoeing conditions were very good, especially on the Cains with the Fall colours hitting stride.

George Routledge of George’s Fly Shop at the Mouth of Renous in Quarryville said angling there was dead with none being hooked or seen.  The water was a bit high and there were few anglers around.

Jim Laws of Miramichi Hunting and Fishing in Newcastle, Miramichi reported only hearing of the odd fish being hooked, and the high majority of them were black.  The water conditions were certainly good.

Syd Matchett of Trout Brook Fly Shop on the Northwest Miramichi said there were a few fish being caught.  Alvin Bell had caught several, a mixture of salmon and grilse on Carter’s Bugs and Black Ghosts.  There was one fish hooked at Wayerton Monday.  Water conditions were good.

Debbie Norton of Upper Oxbow Outdoor Adventures on the Little Southwest Miramichi had about the only positive report this week.  She said that angling got a bit of a bump last Thursday to Saturday. John Woods of Ottawa had hooked a grilse on Thursday, one on Friday and a 15-pound salmon Saturday.  Brad Ronco of Portland, Mqaine hooked a 15-pound salmon on Thursday.  ‘Marina Chase of New Hampshire had hooked a grilse and had an eye-to-eye encounter with a moose.  Paul and Stephanie Allison of Saint John had hooked seven or eight dduring the week.

Flies of choice were Minibous (a pattern with yellow, green and pink), and Copper Killers.

So with Monday pretty well putting the wraps on angling for another season, this weekend will be the last chance for most to get out and “on the water”. 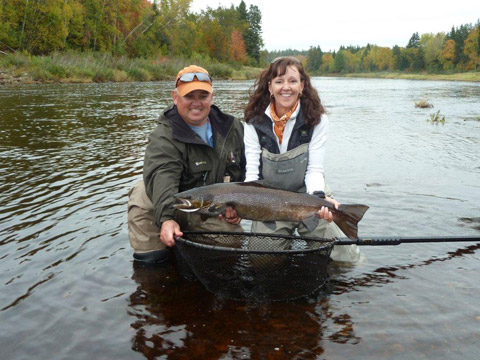 Thought for the Week: “The solution to any problem — work, love, money, whatever — is to go fishing, and the worse the problem, the longer the trip should be.” –John Gierach

The participants, from across North America, will be sharing wide-ranging research on the economics and techniques of land-based facilities.

Over the next two days they will discuss and share knowledge about the state of land-based aquaculture and its potential, and discussing its future

In the next two days, abstracts of the presentations will be posted on the following page:

In Halifax there will be a morning workshop on Saturday, Oct. 13. See above page for a .pdf file with more details.