Another season for all but a very few rivers is “in the books”.  Unlike last year which was one of the best in years, this year has been far from fantastic.  From early July the water was very low and very warm.  Many stretches and holding pools were closed.  Anglers were resting their hopes on a good Fall, but that did not happen.

The counting Traps had very poor numbers with often a half dozen fish constituting a “good day”.  So now the dissection of the season begins with many questions lingering over the winter as we anticipate the 2013 season.

Was it the extremely warm and dry summer that kept the salmon and grilse from coming in? (And this was pretty well the story across eastern Canada.)  The over all numbers were down (see the counts below, and by next week I should have the completed counts for the season).  But what was particularly strange was the very low numbers of grilse that came into the rivers.  Normally, grilse counts are two or three times that of salmon, but the reverse was the case this year, and the salmon counts themselves were also low. Some maintain that it is not totally uncommon to have Fall runs of fish in November and even December.

Speculation abounds about the cause of this.  Are there too many Stripers in the system resulting in them being “weapons of BASS Destruction” for the exiting spring smolt? Do the increasing Bass numbers correspond with the drop in the lack of grilse numbers this year?

Are too many seals eating the incoming runs?  What is happening when the fish go out to sea?  Are other fisheries such as smelts, gaspereaux and shad numbers also down?

It may be a long winter of head-scratching for answers.  Hopefully, there will be a lot of co-operation between anglers, user groups, scientists, DFO and Conservation groups in the seeking of answers and explanations.  Too much finger-pointing will not solve the problem.  Maybe this season was just one of Mother Nature’s anomalies.  Let’s hope so! 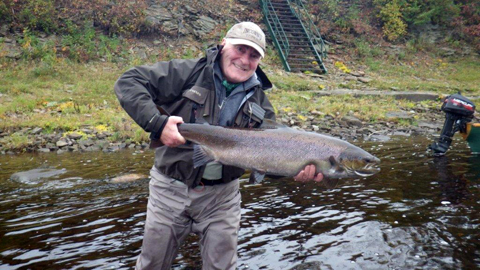 This is a picture of Bill Haldane with a 24lb salmon taken at Flo's pool on and African Mistake.

W. W. Doak and Sons in Doaktown said there has not been a Fall Run yet, but there is still time, maybe not for anglers, but for the fish.  What has been happening was drips and dribbles and wanderers, but no steady run.  Over all on the Main Southwest there were decent salmon numbers, at least enough to hope for the future.  They had heard of a couple caught this past week on the Renous and a few on the Cains.

Flies of choice were the basic Fall patterns such as Ally’s Shrimps and General Practitioners along with Marabous and scattered other patterns.

Derek Munn of Ledges Inn in Doaktown and Mountain Channel in the Rapids area said they had caught some fish the last few days of the season.  On the Cains they hooked 6 Sunday and 5 Monday, but they were dark fish.  They also picked up about 4 in the Doaktown area.  Although the Fall fishing was poor, the last few days were the better ones.

Herb Barry Sr. of Herb’s Fly Shop on the Station Road in Blackville said anglers were picking up the odd dark fish the last few days of the season, but were working hard for them.  They were basically all salmon, but over all, they were few and far between.

Curtis Miramichi River Outfitting in Blackville said the final days of the season were very slow with just an odd fish being hooked.

Flies of choice were Ally’s Shrimps and a selection of traditional Fall patterns.

George Routledge of George’s Fly Shop at the Mouth of Renous in Quarryville said there were basically no fish caught at Quarryville, and even the Cains was slow.  The camps were not even reporting anglers seeing a lot of fish.  The only action at Quarryville was the catching of Striped Bass.

Jim Laws of Miramichi Hunting and Fishing in Newcastle, Miramichi reported a very quiet end to the season, saying “it had been a tough year”.  Most of the few Fall catches that there were, were dark fish.

Syd Matchett of Trout Brook Fly Shop on the Northwest Miramichi said the last few days of the season were not too bad in comparison the most of the season with anglers picking up some fish.  There was lots of water and the weather was cold.

Debbie Norton of Upper Oxbow Outdoor Adventures on the Little Southwest Miramichi said they had a bit of luck the final few days with Bill Matthews of Virginia, US catching 4 salmon in 4 days.  All were in the 33-38 inch range.  Morgan McGinley of Connecticut, US landed 2 salmon.  Over all it had been a rough year for angling and she was hoping for much better next season.

Flies of choice were a selection of Fall patterns.

So, with the Bartibog, Tabusintac and  Burnt Church Rivers still open until October 29, there is still some opportunity to get out and “on the water”. 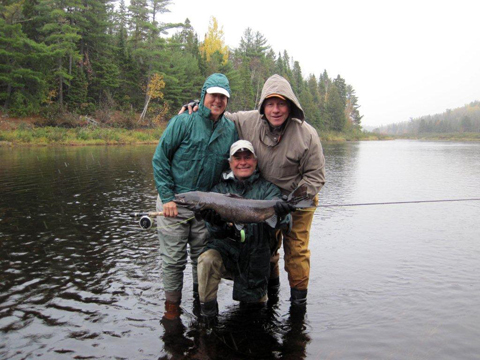 Here are the boys from Texas with a nice salmon on the Cain's on Sunday. They did very well landing 4 salmon and 2 grilse. Now they are having great success with the upland hunting.

Thought for the Week: “The season is ended.  There was not enough of it; there never is.”  Nick Lyons

The participants, from across North America, will be sharing wide-ranging research on the economics and techniques of land-based facilities.

Over the next two days they will discuss and share knowledge about the state of land-based aquaculture and its potential, and discussing its future

In the next two days, abstracts of the presentations will be posted on the following page:

Two Day Land-based Closed-Containment Conference Ends
~~~~~~~~~~~~~~~~~~~~~~~~~~~~~~~~~~~~~~~~~~~~~~~~
The land-based closed-containment conference was highly successful. During the time 75 scientists, members of the aquaculture industry, first nations and conservation organizations were assembled, ASF wrote 11 blog posts, describing some of the research, and the fascinating commercial land-based operations now starting up. To look through the postings, remembering that the latest are at the top, go to: http://asf.ca/blog_1.html

Meanwhile, if you are interested in the advance abstracts of the presentations, they are available at:
http://asf.ca/land-based-closed-containment-conference.html

Alexandra Morton is internationally recognized for her conservation work in British Columbia with regard to sea lice, ISA, and particularly in the region of the Broughton Archipelago.

Dr. Morton also led a successful court case to shift jurisdiction for aquaculture to the Federal Government in BC waters.

Email from Nola at the Miramichi Salmon Association

Well on this last day of the season I do not have good news on the numbers that went through the trap on the weekend. The Millerton and Cassilis traps both had only 2-3 salmon and 1 grilse each day. Today Millerton had no salmon or grilse and about 20 bass. The Cassilis trap had 3 salmon and no grilse. I believe the trap will be taken out the first of next week and I will send out the final week’s numbers as I receive them.

Next week: Final season counts and storing equipment for the winter.