On the Fourth Day of Christmas …

December 28, 2012/Giv'er Miramichi/Comments Off on On the Fourth Day of Christmas …/Arts & Entertainment, Community & Fundraising 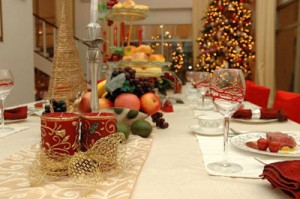 When we all get together for Christmas dinner at my grandparents’ house, we have to eat at long plywood tables while perched on chilly aluminium fold-able chairs (the kind that can easily guillotine fingers) rented from the community hall. My grandfather sets them up row upon row in the garage, front porch and TV room, but we still eat elbow to elbow, back to back.

If you are foolish enough to forget to pick up an essential item (such as utensils) you have to holler and hope for someone in the kitchen to bring them out for you, because the only way out until the end of the meal is the long crawl under the tables.

Each family knows that you have to get there an hour before the suggested dinner time if you want to have any of the good dishes. If you are late, the only thing that will be left is the sad lettuce salad with Kraft dressing, and whatever is left of the pickle plate.

The first to go is usually the City Chicken, which is really made of pork. One of the cousins mentioned they look like deep fried fuzzy mice on a stick, but that has never deterred anyone from making sure they have at least three on their plate. Their flavour depends on who makes them: (holiday dinners always being a potluck deal) Aunt Vivian makes the best, Aunt Lucy makes the worst, and Aunt Lisa’s are always a toss-up. This information can usually be obtained with a sly look at the name written with a sharpie on masking tape affixed to the casserole dish.

The meal is traditionally set up in the kitchen on a slightly sagging expandable Formica table so old no one can remember its origins, its pattern of tobacco brown leaves worn away in places from the three times daily scrubbing my grandmother administers with a soapy j-cloth.

There are always two over-sized mixing bowls of mashed potatoes standing on either side of the table like warring chess pieces, their texture and taste varying from year to year depending on the ambition of the grandchild unlucky enough to be hauled up from the basement to mash them by hand. Thick brown turkey gravy in two plastic Rubbermaid juice containers complete the mirror image.

There is always some sort of sinister dish smack in the centre of the table, compliments of one of the eccentric aunt’s magazine subscriptions. In the early years it was usually a combination of green and red jello with suspicious chunks that everyone would try to take the smallest possible serving of. The spooning would be accompanied by, “Oh, my plate is so full, I am going to be so stuffed. I will just have to take a tiny bit, here!” Or, “Well that looks interesting, I’ll have to come back for some of that for sure!” The aunt to blame will always be hovering somewhere nearby, noting who tries it and who does not.

There are always soft dinner rolls ordered from the grocery store’s bakery and picked up the day before. They are usually the surprise highlight of the meal, spongy, buttery, and practically two-bite-sized, they melt in your mouth and you secretly wish that you had just gotten a plate of buns.

Warmed up just before the meal in tinfoil wrapped bundles in the oven, how a person eats them says a lot about their character. Some use them like mops to clean up every last drop of gravy, some stuff them with turkey and canned cranberry sauce, and some increase their artery-clogging capabilities with huge pats of room temperature butter set intermittently on the table in tea saucers. Some perform a combination of all of the above.

The crown dish is the turkey, and the conversation after the meal is always concerning the general consensus of the turkey’s quality. Most will publicly agree that it was the best turkey yet, until the car ride home where it will be admitted that it was either undercooked, overcooked, tasteless or dry as a fart.

The cabbage rolls, ham, and perogies usually don’t make it out to the first round of people, they wait patiently on the counter until there is enough room on the table to squeeze them in. Holiday dinner veterans know enough to scan the counters for their presence before heading out to squeeze into a seat.

There is a ubiquitous round of what my grandmother calls “appetizers” on card tables mashed up against the wall in the hallway. This is where you can always find the odd combination of vegetables and dip that have undoubtedly been sampled by some four year old’s toy car, crackers and sweaty cheese, smoked salmon and homemade sugar cookies shaped like Christmas trees. You can also find spicy Polish sausage that will cause silent burps resulting in accusatory screams and the lightening fast rolling down of the car’s manual windows on the ride home.

Sara Princiotta graduated from Trent University with a Bachelors of Arts degree in English Literature and Cultural Theory. She was born and raised in Ontario and now makes her home in Miramichi, New Brunswick. Sara is using her current state of being “underemployed” to pursue her interest in writing short stories.