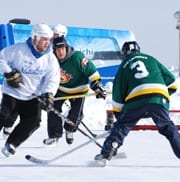 The 9th annual Miramichi Rotary Pond Hockey tournament kicks off this afternoon with teams taking to the ice at 4 pm. Click here for the schedule.

Earlier this month the Rotary Club of Newcastle announced they would be officially ending their involvement with pond hockey in Miramichi following this year’s event.

“It has been an enjoyable journey for the membership as much as for the community, and we will all miss it,” said long-time chairperson Geri Mahoney. “Pond hockey has not only been a lot of fun, it has offered the community an annual outlet during one of the most depressing economic periods ever seen. Mills have closed and residents have moved away, but during that one weekend each year all this was put aside and magic happened.”

Tournament History
It seemed like yesterday when the club announced they would host a pond hockey event in the scenic venue of French Fort Cove. In reality it was at a press conference on February 25, 2004 when former president Patricia (Pat) Perry, declared, “This event could have important value for our community, as well as being a lot of fun – the potential is certainly huge.”

Looking back now, the term “huge” seems like an understatement.

Starting in 2005, the event fielded 61 teams on eight ice surfaces shooting pucks under a wooden crossbeam held 10 inches above the ice by size 10 rubber boots filled with cement. These makeshift nets, designed by club member Francis Malley, were in use for seven years before giving way to the new design used last year. While distinct in appearance, with time the old nets simply required too much annual maintenance.

The 2005 chairman, Hal Raper, explained in a press release from that period the four separate divisions was an attempt to appeal to a cross selection of players. “There will definitely be a competitive atmosphere, but we also want teams to just have some plain old fun.”

The competitive open section was by far the most popular, with 40 teams looking to take home top honours. The women’s division was believed to be the first pond hockey offering anywhere for women. The oldest tournament participant, a 77 year-old grandfather from Fredericton, skated with his 40-something son and two teen-aged grandsons in the family division.

The team travelling the farthest consisted of players from Ottawa, Toronto, and New York. The weather was perfect that year, the hockey was fun, and the community was smitten.

The 2006 event was of course remembered for being more ball hockey than ice hockey. This was the first real challenge where the Rotary Club showed their resilience. Despite a nice Friday afternoon start, Mother Nature decided to throw a curve ball, offering up snow, followed by rain, then a temperature of plus three overnight into Saturday morning, rising to plus seven.

Again at the helm and determined not to give in, Hal Raper bought out every road hockey ball available in Miramichi to keep the games running. By 10 o’clock that morning, ice conditions had forced every participant to abandon their skates for boots or sneakers, and the 84 teams were indeed now running.

This was also the year the popular Non-Competitive section was added, for those who just wanted to play hockey and not keep score. The community responded in force to a request to wear hockey jerseys, an effort spurred on by the club’s entry in the inaugural Kraft Hockeyville, placing a respectful top 25 out of hundreds of entries and later winning a $10,000 donation to the Food Bank – fortunately the CBC had filmed all their footage on Friday before the rain showed up, so Miramichi looked pretty good.

With the New Year’s Eve celebrations of 2007 in the past, the club eagerly waited for the temperature to turn cold for year three. A small band of volunteers, armed with push snow-blowers, and blade-equipped four-wheelers spent the best part of a week removing the snow blanket to expose the ice and allow it to thicken. With 24 inches of ice under foot, and 88 teams ready to play, the third time around was a charm, although new chairperson Geri Mahoney noted, “The club is trusting the community will pitch in and help out, as the event is becoming larger than the small band of organizers expected.”

Rolling into 2008, anticipation in the community was ripe with the news that ex-NHL players Terry O’Reilly, Rick Middleton, Yvon Lambert, Pierre Bouchard, and Jack Valiquette would be participating and rubbing elbows with the locals. It was at this time that Mother Nature again demonstrated this activity was not for the faint of heart, sending a major winter snowstorm in from the west, and challenging club member Colleen Bawn to get Valiquette out of Toronto ahead of it while airlines were cancelling flights en masse.

Five volunteers stayed all night at the pond, plowing the massive accumulation of snow in an effort to keep up. Waking up Saturday morning to mountains of snow, city streets still in the process of being plowed, and tents blown down at the cove would have caused many to just quit. Calls went out to club members, as well as the participating military contingent from CFB Gagetown (the Miramichi version of “call in the army”), and the cleanup began, as arriving players from the 97 teams picked up shovels and pitched in, leaving the event only one hour behind all day and again declared successful. The “Winterlights Celebration” committee agreed, giving the nod to Pond Hockey for their 2007/08 award. 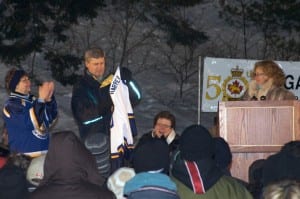 Prime Minister Stephen Harper at the Pond Hockey tournament in 2009.

Prime Minister Stephen Harper decided to check out what all the excitement was about in 2009, paying a visit to the cove on a crisp Friday evening, with crowds estimated over 3000 on the ice. The eyes of the country were on Miramichi that night, as media types added their numbers to the cove. Security was tight, and even the city engineer was involved, being called on to certify whether an ice thickness of over two feet could hold everyone.

For the first time video transmissions were beamed across the internet, and almost 13,000 watched, including such hockey hotbeds as Taiwan and the Dominican Republic. Terry O’Reilly was back with his Boston buddies Don Marcotte and Brad Park in tow, and Mother Nature behaved like a lady. With 93 teams competing, another year was successfully in the books, capped off by the Province of New Brunswick’s “Excellence and Innovation in Tourism Marketing” award for 2009.

The year 2010 finally saw the Rotary Club reach their stated goal of 100 teams, topping off with a record 104. Premier Shawn Graham made a cameo appearance to play for the Big Brothers team, and the internet feed from the pond went live streaming. The Memorial Cup paid a visit to the cove and local schools, allowing hundreds to view the names of future NHL stars. For the first time winning teams hoisted a “Cup” over their head – in reality, an old style skate laminated and mounted on a wooden base – and had their team names immortalized on it. French Fort Cove was lit up with fireworks, a first for wintertime in the region, much to the delight of everyone who saw them at the cove and far beyond.

Having now gone two years in a relatively uneventful manner, Mother Nature changed her mood in 2011 and decided not to make ice for the event. With mild temperatures, and a thick snow blanket, the minimum safety thickness for snow clearing was not being reached, even for the small snowblowers. The decision was made to move to the former airbase rather than risk losing the event to unsafe ice conditions. Premier David Alward came for a visit, the internet feed featured live commentary, the fireworks continued, and 89 teams played hockey, but most agreed the atmosphere was just not the same as the cove. 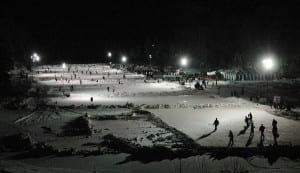 Join us at the pond this weekend!

Last year, having listened to the prayers, Mother Nature was again kind to Miramichi and allowed the event to go ahead at French Fort Cove with picture perfect conditions and 84 teams. By popular demand the event was shortened in time to end Saturday evening instead of the play-offs on Sunday, while Brian Siddall again performed his magic with the fireworks. With the Sunday tear-down, the nets and other assorted gear were once again stored for the year.

The Rotary Club of Newcastle is very proud of this project, as well as the estimated $200,000 raised to date for local and international projects. The organization would certainly like to see the activity continue next year, and hopes another group is willing to step up and be mentored to fill the void.

However, the Rotary Club plans to go out with a bang … there will be fireworks! You can check them out at 10 pm Saturday night, February 2nd.

If you ever planned to get involved, now is the time! See you on the pond this weekend!

For more information or to browse the photo galleries throughout the years, visit the Pond Hockey website at www.MRPH.ca.