Miramichi Fishing Report for Thursday, May 23, 2013

This week’s column has a definite “bright atmosphere” to it.  Yes, there are bright salmon on the Northwest Miramichi, and reports of some bright trout on both the Northwest and Main Southwest Miramichi.  The Striped Bass have moved from the staging area around Strawberry March in City of Miramichi up river to the spawning area between Eel Ground and Sunny Corner. (see the MSA report below).

Don’t forget to drop into the Curling Club in Newcastle Friday and Saturday for the Miramichi Fly Fishing and Sportsman show (see poster and information below). 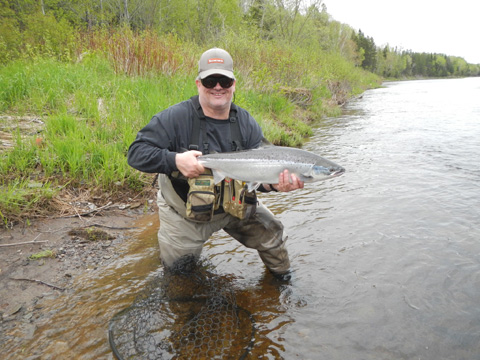 Allen Dobson caught this bright on the Northwest on Green Machine. He hooked another one later in the day on a Black Bear Hair with a green butt, but lost him quickly.

W. W. Doak and Sons in Doaktown said the river was up nicely and conditions were good for the time of year.  There were some reports of Sea Trout in the Main Southwest Miramichi in the area between Blackville and Boiestown.  There were no reports of bright salmon there yet, but the time for the Rocky Brook run is close.  Two years ago there were bright salmon caught on May 24, but the normal time for this are is the first week of June.

Flies of choice for trout were smaller streamers such as Mickey Finns on No. 6 hooks, Muddlers and small trout flies such as May Flies.

Derek Munn of Ledges Inn in Doaktown and Mountain Channel in the Rapids area said the water there was perfect, but there were no bright salmon yet.  There were reports of some Sea Trout around Quarryville and some black trout.  The two private lakes owned by Ledges Inn fish well for trout on the weekend, and anyone interested in booking trip to them should contact Derek Munn at Ledges Inn (506) 365-1820.

Flies of choice were Dry Flies and small trout flies along with such wet flies as Mickey Finns, Muddlers and Green Machines.

Herb Barry Sr. of Herb’s Fly Shop on the Station Road in Blackville said angling was quiet with only one spring salmon caught.  He said it must have the last one going out.  There were no Sea Trout reported there, but anglers were getting some black trout in the 12-14 inch range.  He’d heard an unconfirmed report that the Gaspereaux were in at Quarryville.  There were no bright salmon there yet, but water conditions were good, although a little high.

Flies of choice were Rat-Faced McDougall’s, Coachman’s, small Mickey Finns on no. 4 hooks and Muddlers.

Curtis Miramichi River Outfitting in Blackville said there were no bright salmon yet, but some nice trout were being caught with an 18-incher reported at Quarryville.  The water level was good with the water clear and cold.  Canoeing conditions were good, as long as one did not fall in (Brrrrrrrr!)

Flies of choice were small trout flies as anglers were trying to match the hatch.  They were also using Caddis, MUDDLERS, White Wulffs and Gray Wulffs.  In the brooks anglers were using worms.

George Routledge of George’s Fly Shop at the Mouth of Renous in Quarryville said angling had been pretty good until Tuesday of this week as anglers were picking up black trout.  One lady angler caught a 10-inch, 12 inch and 18- inch trout using flies on the Renous.  There were some 12-inch trout taken at the Mouth of Renous and some at the Quarryville Bridge   There were no bright salmon yet.

Flies of choice were Black Ghosts, Copper Killers, Mickey Finns, some Gray Wulffs and attempts to match some hatches.

Jim Laws of Miramichi Hunting and Fishing in Newcastle, Miramichi reported lots of Striped Bass still around for Hook and Release.  He had heard no reports of bright salmon and only a few trout.

Flies of choice were Green Machines, Black Ghosts and Undertakers as anglers were stocking up for the salmon run.

Syd Matchett of Trout Brook Fly Shop on the Northwest Miramichi said angling was improving as he had heard of several bright salmon being caught.  Dave Gillis caught a bright salmon on the Northwest May 19, Bonnie Wright on May 20 and Allen Dobson, Hilaire Chiasson and Rodney Colford on May 22.  Syd said he was beginning to feel sorry for Blackie MacDonald as even the women were out-fishing him.  There were some decent trout in the 2 to 4 pound range, but they were mostly black.  He had not seen any bright.  Water conditions were perfect.  He noted that there were over 800 entered in the Red Bank Trout Derby last weekend. 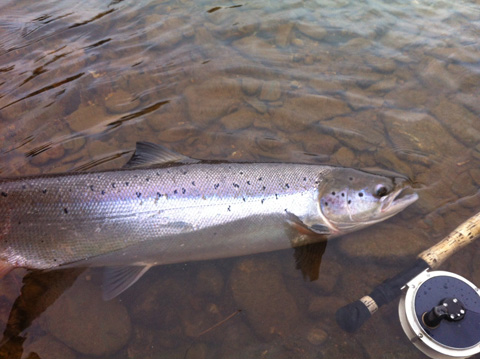 Rodney Colford landed this 15 pounder on May 22 around 7pm on the Northwest Miramichi. Landed on a Green Machine with white tail. This was the only one he saw.

My fishing buddy Dave Ingersoll made me go to Syd’s to get a new pair of waders.  He told Syd to charge me a $10.00 Environmental Fee as I had so much goop on them, and that with my duck-tape he felt he was touring with the Red Green show.  So I took my licks and bought a new pair.

Flies of choice were Butterflies.

So with more and more reports of bright salmon, even one bright grilse, and some sea trout arriving, it is time to get out and “on the water”. 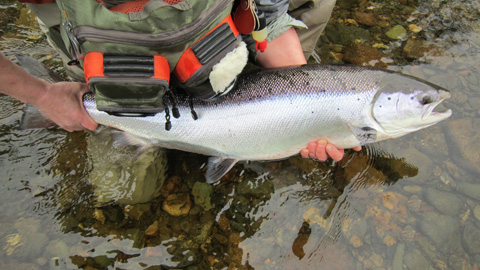 Thought for the Week:
“May the holes in your net be no larger than the fish in it.” ~Irish Blessing 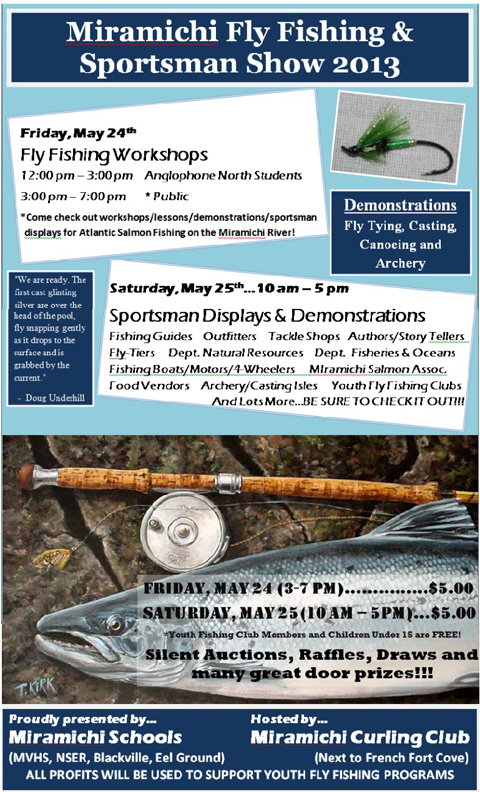 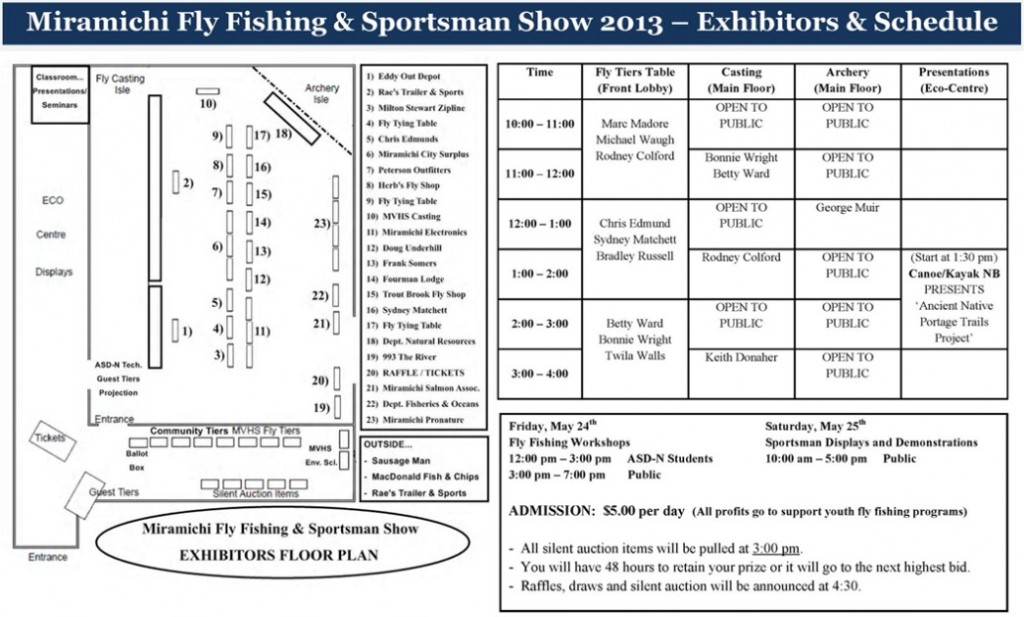 E-MAIL:
From Nola at the Miramichi Salmon Association:
Hi All

Yesterday morning there was little sign of bass in the Northwest and even the DFO biologist agreed they must have moved down to stage somewhere. Then yesterday afternoon they moved up and spawning of striped bass has begun. My husband and a friend went out fishing last night about a kilometre or so below the Cassilis trap net and the river was bubbling with activity. They fished from 7:15 until dark and caught about 90 fish. It was not hard to catch them as the faster you reeled in your hook the faster they swam after it. The boys did say that if you did not reel and just left the bait lay there the bass were not interested. So it looks like they were not feeding but rather chasing anything that moved. That said, they did swallow a lot of the boys lures, so had those lures been fish they would have been eaten. When returning to shore they had to go slowly as there were so many bass they were hitting them with the boat.

The smolt wheels at Trout Brook and the Sevogle are slowing down with catches of 23 and 27 smolts today. The trap at Cassilis however had a big day with a catch of 900 smolts. Hopefully the bass will be more interested in spawning than eating and this big run of smolts will make it through. I have no data yet on our tagged smolts but will get it to you when we receive it.

The bright salmon have made their way into the river. While DFO biologists were using the gaspereaux trap just above the Anderson Bridge (Route 8) in the Northwest Miramichi to catch and tag bass they reported catching a number of bright salmon. And yesterday a local angler canoed the Northwest from Miners Bridge to Wayerton and caught a bright grilse. I am told this is early for bright grilse – most reported now have been salmon – but he did keep it and it was a grilse. I have heard rumours of others catching bright fish as well. But only on the Northwest – DFO conservation officers confirmed today that they have not heard of any bright fish being caught on the Southwest Miramichi as of yet.

The Red Bank Trout Derby took place on the weekend with over 800 entrants. Catches were down from last year but there were still a lot of trout caught with a lot of sea run trout reported. The winner of the car was Marie Levi of Red Bank.

The MSA and the North and South Esk Regional (NSER) High School Youth Fishing Club will be co-hosting angling clubs from schools all over the province on Friday and Saturday, May 30th & 31st. Students will arrive Friday at the Salmon Conservation Centre in South Esk and will be competing in a number of activities including casting and fly tying. The MSA will be supplying lunch, touring the students through the hatchery and giving every participant a complimentary membership to the MSA.  On Saturday, Miramichi Valley High School (MVHS) will be hosting the students and taking them fishing on the Southwest Miramichi.

Also on Saturday the MSA is hosting a salmon dinner with hot dogs and hamburgers for kids with proceeds going to the youth fishing club. This will take place at NSER in Sunny Corner running from 4:00 – 6:00 pm. There will be silent auction tables and raffles. Tickets are $10 and can be purchased from NSER at 836-7000 or from me at 622-4000. Please come out and support this event – MSA staff will be there to answer questions on our field programs and activities on the river.

If you are in the Miramichi area this weekend please visit the Miramichi Fly Fishing and Sportsman Show 2013 being held on Friday and Saturday, May 24th and 25th, at the Miramichi Curling Club (Next to French Fort Cove). There will be demonstrations of fly tying, casting, canoeing and archery with opportunities for you to try your hand. Outfitters, tackle shops, DFO, DNR and more will join MSA in the displays section. Entry fee is $5 with youth fishing club members and children under 15 entering at no cost. Please see the attached poster and program for more details – hope to see you there.

Finally I would like to thank everyone that made the 2013 Annual Freeman Dunnett Moncton Conservation Dinner such a great success.  A sold out crowd filled the Crowne Plaza in Moncton last Thursday night and were very generous as usual.  Our next event will be the Salmon Classic Gala Dinner on July 14th at the Rodd Miramichi. Tickets are $50 and can be purchased by contacting Jo-Anne at 457-2220 or myself at 622-4000.
—————————————————————–
From Gary Tanner

A fine week on the Miramichi this spring:  http://theriverscourse.blogspot.com/2013/05/miramichi-salmon-camp-spring-2013.html 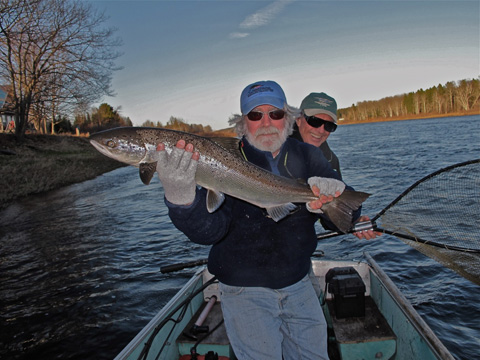 On the Miramichi this Spring