Miramichi Fishing Report for Thursday, May 30, 2013

This week there is certainly no shortage of water as last week’s deluge brought the rivers to well above spring high.  As of Wednesday, any pools that were fishable would most likely have to be described as “fishably high”.  The forecast for Wednesday overnight and into today was more rain, so a check with some of the locals might be in order before venturing out to the rivers.  Boats were the first choice for heading out. 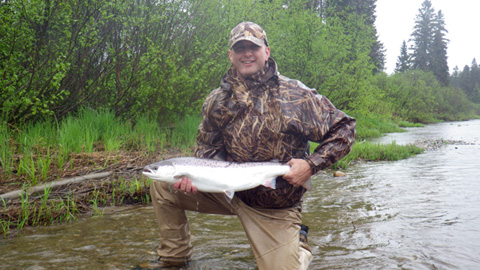 Travis Quigley with a fish he caught on the North West on May 24th. Photo from Derek Munn

MSA is sponsoring a youth program this Friday and Saturday for five high school fly-Tying clubs.  Attending will be NSER, MVHS, Blackville High and Hampton and Rothesay from the Saint John area.  Friday will be at the hatchery and will see casting and tying competitions, lectures, a hatchery tour and free membership to the MSA.  There will also be fly-tying instruction from professional tyers, a barbeque, and an overall good river experience.  On Saturday the MVHS Club will host many of those in attendance as they will be part of Fish New Brunswick day as they will be taken in small groups by adult volunteers to selected private and open water areas.  The event kicks off bright and early at 7:30 a.m. at the Blackville Park.  Students will fish two different stretches of water on Saturday with a noon barbeque, casting demonstration and outback kitchen demonstrations.  What an opportunity to bring future anglers and tyers to the river!

Doug White’s Tammerack Sports Fly Shop in Juniper said he hated to start his report off in the negative but had no choice. “The sea-trout run was just starting but with all this rain they are probably all drowned by now”,  said White. A few days of good weather and the river will be down where it should be and by the weekend hopefully it’ll be great fishing.

Flies of choice in no particular order are: Streamers, Butterflies, Bugs, Dries and assorted wet flies.

W. W. Doak and Sons in Doaktown said that by the weekend they hoped that people would be able to get back to the river.  Blackville had received close to four feet of a raise, but by late Tuesday afternoon, it had dropped to half of that.  Prior to the rain there had been reports of sea trout and a bright salmon was seen jumping.  By the weekend it was hoped that anglers in the area might catch the tail-end of the trout run and maybe even an early salmon.

Flies of choice were larger streamers, Butterflies, Mickey Finns on big hooks such as no. 2 & 4s, along with some Muddlers, and maybe some small trout flies that “matched the hatch”.

Derek Munn of Ledges Inn in Doaktown and Mountain Channel in the Rapids area said the water had been high and they have not fished a lot to date, so there was no report to give.  He said they will have guests fishing starting next week and hopefully a more positive report.

Herb Barry Sr. of Herb’s Fly Shop on the Station Road in Blackville said the water was too high for any shore fishing and the only ones out were using boats.  In spite of the big raise in water, it was dropping nicely by Tuesday.  If Thursday did not add a lot more rain, the weekend should be decent fishing.

Flies of choice were Black Ghosts and Cossebooms on nos. 2 & 4 hooks.

Curtis Miramichi River Outfitting in Blackville said angling was very quiet with the water extremely high and dirty.  The only positive late Tuesday was that levels were dropping quickly, creating hope for a good weekend on the water.

George Routledge of George’s Fly Shop at the Mouth of Renous in Quarryville reported that no anglers were out because of the high water.  If rain on Thursday was minimal, there might be decent angling Thursday and Friday, but any amount of rain would put off angling until Saturday and Sunday.  There had been some sea trout caught before the rain and one bright 17-pound salmon.

Jim Laws of Miramichi Hunting and Fishing in Newcastle, Miramichi reported that with the high water it was hard to get an accurate read on the rivers, and that it would likely be the weekend before there was decent angling again.  The Striped Bass were still providing good hook and release angling, and there had been both bright salmon and sea trout on the Northwest before the rain.

Flies of choice were Black Ghosts, Green Machines and Butterflies on nos. 4 & 6 hooks.

Syd Matchett of Trout Brook Fly Shop on the Northwest Miramichi said water levels there were very high, but dropping with a few pools fishably high by late Tuesday.  There was one 43-inch salmon caught Tuesday by Andy Cowen of the Moncton area.  Matchett predicted good fishing by the weekend if there was not a lot of rain Wednesday/Thursday.  There were bright trout prior to the rain and decent numbers of bright salmon.

Syd was concerned about Blackie MacDonald again this week as he was reported sleeping in his chair by the river.  “I tried to tell him that he can’t catch fish and sleep at the same time, but he just won’t listen” said Syd

Debbie Norton of Upper Oxbow Outdoor Adventures on the Little Southwest Miramichi said there was certainly lots of water.  It was so high that when she was driving to the store for milk, there was a beaver walking down the road as he had been flooded out.  And that is a true story!  She noted that the Striped Bass had been spawning and that the smolt run going out had finished.

Flies of choice were big Butterflies.

So hopefully the river levels will drop by the weekend, allowing anglers to get out and “on the water”. 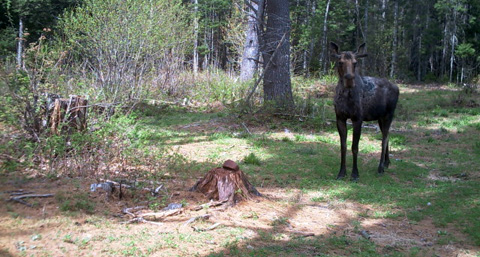 Thought for the Week: “The artifice of fishing is displayed not only in the delusion of the fish, but to some extent in the delusion of the fisher also. Let him but have the power of persuading himself that the boy in him has never grown up, or better, let it be so without his knowing it, and the world is his oyster”. H.T.Sheringham, Coarse Fishing 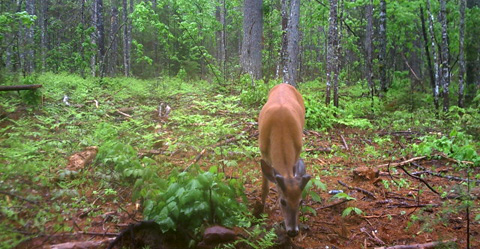 New Blog from ASF Research
~~~~~~~~~~~~~~~~~~~~~~~~~~~~~~~~~~~~~~~~~~~~~~~~
ASF Research staff now have a regular blog on ASF’s website to share with viewers their experiences and work in a wide range of field activities, with the goal of unraveling the mysteries of Atlantic salmon migration, population dynamics and restoration. Click on “Blogs” at the top of ASF webpages, and go to “Research – In the Field”. The direct link:
http://www.asf.ca/research-in-the-field.html 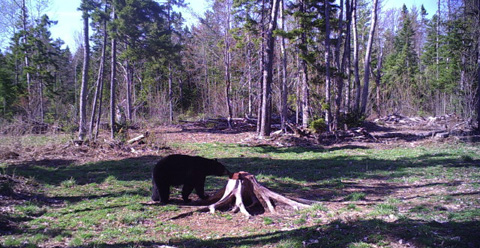 E-MAIL:
Hi Doug. Ian Tennant from Fochabers in Scotland here.   Fochabers is possibly going to twin with the Miramichi shortly. I find your weekly report very interesting. I am Head Ghillie (guide ) for the Gordon Castle Estate  Fochabers. We fish and guide on the river Spey catching Atlantic Salmon as well.  Our season starts in February till the end of September. Hope your season goes well .
Tight Lines or Screaming Reels. Ian.