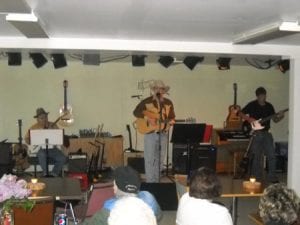 The Morrisons, left to right: Blaine, Ricky and Eddy.

The Miramichi Folklore Park in Renous saw double duty this past weekend.

The Friday Night Racket featured the smooth country and rockabilly sounds of the Morrisons. The boys had lots of energy and were much appreciated by the good-sized crowd despite the fact that there were so many events happening on the river.

Blaine, Eddy and Ricky were seen the next day filling grocery carts with dry goods for the Miramichi Food Bank which they purchased with the money they earned for playing on Friday night. Way to go, guys!

Saturday at the Park saw Zack’s Band playing for our first Seniors Dance. 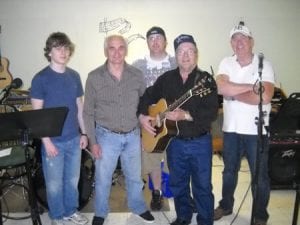 The audience really liked the music and the dance floor was crowded most of the time. There is a lot of experience in this group, which is very nicely complemented by 15-year-old Zack’s lead guitar playing.

We will be holding these dances on the first Saturday of the month from now on.

There will be a meet and greet starting at 4 pm followed by a slide guitar workshop, a meal, a concert by Miramichi’s own Terry Whalen, then John will play his amazing style of blues for us.

For more information about John Campbelljohn visit his website.

This week’s Friday Night Racket will feature the music of Greg Donovan and Friends. Come listen to a variety of music with Greg, Phyllis Drier, Highwater and others on Friday June 7th at Miramichi Folklore Park, 46 Memory Lane, in Renous.

The music starts at 8 pm, admission is just $5.