High water certainly put a damper on most fishing over the last week, but some anglers pushed the envelope and had some success.  The best angling was on the Northwest which is usual for this time of year.  As we move into June, more salmon will be gracing the other tributaries in greater numbers.

The MSA is to be congratulated for sponsoring a high school fishing club symposium involving five NB schools.  Attending were North & South Esk of Sunny Corner, Miramichi Valley High, Blackville High, Hampton High and Rothesay high.  In all over 90 students participated in competitions in fly tying, casting, rod & reel maintenance and knot-tying along with sessions from ASF, DNR, a hatchery tour and barbeque.

Many stayed over for Saturday’s Fish NB Day organized by Ashley Hallihan and Jason Curtis of the MVHS club.  Many camps and lodges provided their waters freely for the students and volunteer guides.  Participants were given the opportunity to fish two different stretches of the Main Southwest Miramichi.  Thanks goes out to NB Tourism and donors who provided prizes.  A fine group of cooks treated everyone to a fine mid-day meal.  In spite of very high water, it was simply a job well done and very much appreciated by all! 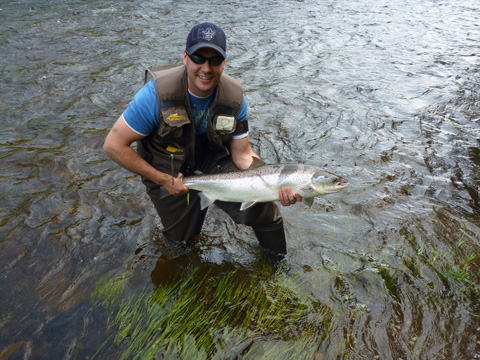 Jeff Morris caught this salmon on the Northwest on May 31

Doug White’s Tammerack Sports Fly Shop in Juniper said it was another week of high water. The River is still unfishable. The pools have overflowed into the woods in many places and I haven’t talked to a soul that’s even trying to fish. Sunny weather is predicted for the next several days, and if so, the river will be soon be good to go, possibly by the weekend. The first Salmon Butterfly (yellow and black) was spotted yesterday, a sure sign of Brights in the river so there is something to look forward to. Due to nobody fishing there are no flies of choice. Again I am sorry for not having a better report but I’m just calling it as I see it

W. W. Doak and Sons in Doaktown said overall conditions this week were more encouraging than last.  The water was high, but dropping.  A grilse had been seen jumping between Blackville and Doaktown and another angler had had a pull.  There was one Salmon caught above Doaktown.  If there is no more rain, the weekend should be decent for the time of year.  There were some trout around and generally, the report could be termed “cautiously optimistic”.

Flies of choice were Butterflies, White-tailed Green Machines, and Muddlers.

Derek Munn of Ledges Inn in Doaktown and Mountain Channel in the Rapids area said there was one salmon hooked by Shawn Betts on Monday on the Main Southwest.  They had been doing most of their angling on the Northwest where anglers were catching some brights.  Munn reported hearing of two salmon Wednesday and saw another on.  Generally, the water was a little high, but he wasn’t complaining.  They also picked up 8-10 trout over two days in the 12-14inch range.

Herb Barry Sr. of Herb’s Fly Shop on the Station Road in Blackville said the water there was still too high to fish from shore, so boats were the only option.  Jim Steeves had a salmon in the Barnettville area, but basically there was only the odd salmon being taken.

Flies of choice were mostly trout flies such as Muddlers, Wulffs, Rat-Faced McDougall’s and Coachmen.

Curtis Miramichi River Outfitting in Blackville said the water there was still very high and anglers were just waiting for it to drop.  There had been good canoeing last weekend.  There are still a few places available for the June 22 Fly Casting session.  Contact them for more information at 506-843-2481.

Flies of choice were Green Machines, Bear Hairs and Butterflies.

George Routledge of George’s Fly Shop at the Mouth of Renous in Quarryville said there had been one salmon caught on the Renous from a boat.  The same anglers also caught several bright sea trout in the 10-14-inch range. The water was too high for anglers to get out to the bar to fish.  If there is no rain, the weekend might provide some angling.

Jim Laws of Miramichi Hunting and Fishing in Newcastle, Miramichi reported some salmon on the Northwest along with the odd grilse.  There was still some good Striped Bass fishing, but more so in the Whitney area.  He had heard of some nice trout in the Quarryville area that were in the 2-3 pound area.  Generally, the water was still on the high side.

Syd Matchett of Trout Brook Fly Shop on the Northwest Miramichi said the water was still high, fast and clear with a good temperature.  There had been a fair number of bright salmon caught with reports of 5 to 6 a day.  There also had been two grilse caught and another released as it was above the Wayerton Bridge which is now “hook ’n release” until the end of July.  Ray Woodill had caught three salmon one day and said they were all within a centimeter of each other in length.  “Any day you can catch three salmon in one day any where is a great day of fishing”, he added.

It was a good day Wednesday for retailers according to Syd.  Mark Bishop of Ontario hooked a salmon which took off with his yellow floating line.  He managed to retrieve the line and tied it back on only to have the same salmon took it again for keeps.  As well Hazen Sweeney lost part of his fishing rod just above Cable Pool on the Northwest.  Brian also lost a pair of Waders Edge waders at Cable pool.  They were found by Bob Mason and were hung up to dry, but after that disappeared.  Anyone finding any of these items is asked to return them to Syd’s shop.

Debbie Norton of Upper Oxbow Outdoor Adventures on the Little Southwest Miramichi said Mark Fillamore of the Rexton area caught a salmon on the Northwest.  The water was quite high for angling, but perfect for the fish.

Flies of choice were big Butterflies.

So as the water drops, more fish coming in, it is time to get out and “on the water”.

Thought for the Week: “The charm of fishing is that it is the pursuit of what is elusive but obtainable, a series of occasions for hope.” John Buchan
(A big THANK YOU to Jack Patriquin for sending along some great quotes from the book Freshwater Fishing)

New Blog from ASF Research
~~~~~~~~~~~~~~~~~~~~~~~~~~~~~~~~~~~~~~~~~~~~~~~~
ASF Research staff now have a regular blog on ASF’s website to share with viewers their experiences and work in a wide range of field activities, with the goal of unraveling the mysteries of Atlantic salmon migration, population dynamics and restoration. Click on “Blogs” at the top of ASF webpages, and go to “Research – In the Field”. The direct link:
http://www.asf.ca/research-in-the-field.html

In a short video, ASF’s Sue Scott describes the issue of an increased take of Atlantic salmon in Greenland waters, and what it means for North American salmon.
http://www.asf.ca/concerns-raised-about-greenland-harvest-of-wild-atlantic-sa.html

ASF’s Sue Scott is Co-Chair of the NGOs at NASCO, and below is the Opening Statement prepared for presentation at the beginning of NASCO.
http://www.asf.ca/ngos-opening-statement-at-nasco.html

From the MSA:
Hi All

One gaspereaux fishermen also reported over 10,000 bass in his net on Monday. There are still a lot of bass in the river as spawning has been interrupted and the bass confused by the mix of hot and cold weather and cold water. Spawning was witnessed on Sunday in Cassilis however, and there was some good bass fishing on Monday at the Mill Stream.

The MSA crew lifted the smolt wheels and trap when the high water came and with no let off last week the wheels have been removed. The smolt trap was fished last week for a few days and taken up on the weekend. Smolt numbers leaving the Northwest system will be available after the data has been analyzed. 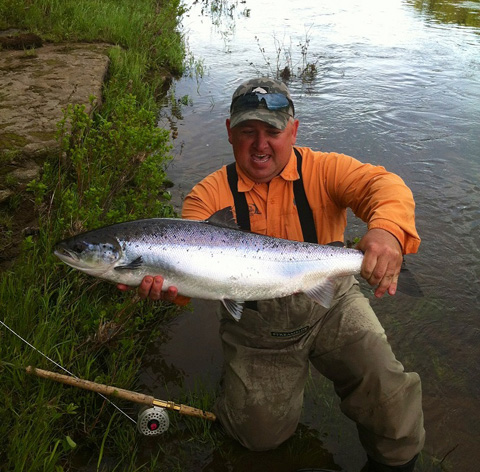 Some salmon are being caught. I have attached a couple of pictures. Rodney Colford caught a 12 pound and an 18 pound salmon on the Southwest on May 30th. Greg Amos caught his first bright fish of the season on May 24th on the Northwest – picture taken by Andrew Anthony – thanks guys for these great pics. 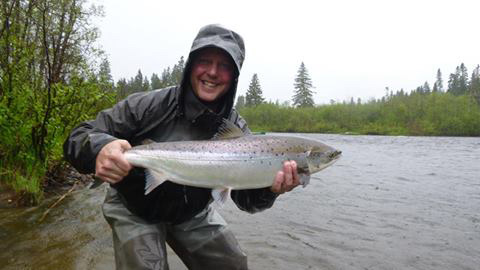 At the hatchery our salmon fry are doing well and have started feeding. We will keep these fish until the end of June or early July and then they will be stocked into areas we determined last year through electrofishing had low juvenile densities.

The Salmon Olympics held here at the hatchery on Friday were a great success with over 90 students participating from 5 schools. Winners of the casting and fly tying competitions were each given a fly rod kit donated by ASF. A random draw winner from the rest of the students also received a fly rod kit. Second and third prizes were also awarded. The students went fishing on Saturday on the Southwest and although no salmon were caught the rain did hold off and everyone had a great time. We hope this will become an annual event.

The Salmon Supper on Saturday night raised over $1350 for the NSER Fly Fishing Club – thanks to everyone that came.

DFO has released the official salmon stock assessment for the Miramichi River for 2012. It can be read at http://www.miramichisalmon.ca/dfo-posts-2012-salmon-stock-assessment/
The numbers are poor but not surprising. Let’s hope for more fish and some nice weather!

Until next week
TIGHT LINES