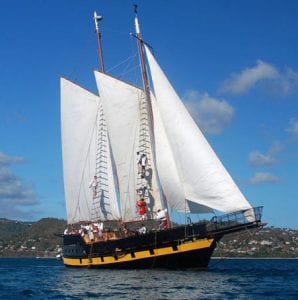 The New Brunswick Festival of Tall Ships on the Miramichi happens May 31st to June 2nd, 2013.

The festival is the largest of its kind to ever happen in the province and will see at least eight tall ships, Canadian children’s television series star Theodore Tugboat, and the Royal Canadian Navy Ship HMCS Summerside sail up the Miramichi River and dock at two wharves in the City.

The Peacemaker, Pride of Baltimore II and Theodore Tugboat will dock at the Station Wharf Marina in Chatham, while the HMCS Summerside, Hindu, Liana’s Ransom, Lynx, Sorca, Unicorn and Roter Sand will dock at the Miramichi Port Facility in Newcastle.

In addition to ship tours, visitors can enjoy a host of other activities such as a visit from the “Pirates of Halifax”, the Big Canoe Experience, helicopter rides, puppet shows, an art show and paint out, re-enactments from the War of 1812 by the Shelburne Longboat Society, live entertainment, historical theatrical tours, workshops and exhibits at Beaubears Island, a pub on Friday night at the Civic Centre, children’s activities, and much more.

Admission bracelets are $10 each or $30 per family. The bracelet, if not broken, provides access for Saturday and Sunday.

Click here to view the complete Festival schedule. The Friends of Beaubears Island have also planned a week full of activities in conjunction with the Festival. Click here to download their schedule of events.

Win a River Cruise!
There’s still time to enter to win a cruise on the tall ship, Liana’s Ransom next Saturday night June 1st! Just drop by Towne Ford, Renaud’s Furniture, Wine Kitz or Allison’s Manufacturing and fill out a ballot for your chance to win. The winner will be announced in the coming week.

We look forward to seeing you on the Mighty Miramichi next weekend for this once in a lifetime special event!