The report this week is one of mixed messages from those around the river.  I’ hearing lots of fish, but they won’t take well, the water is too warm, to good fishing.  So it is a coin toss this week. 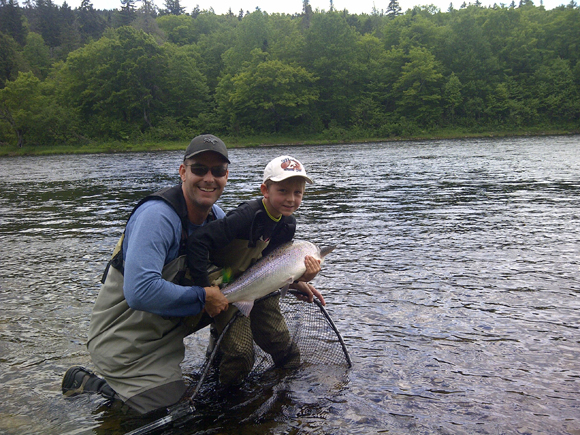 From Mark Coy, Fredericton: My 7 year old landed his first salmon on Thursday last week. Hooked in the Boiestown area.

Doug White’s Tammerack Sports Fly Shop in Juniper said that the salmon have finely arrived. No large amounts yet but this is only June and they don’t usually have much until July or whenever the downriver crowd is done whipping them.  The water levels are dropping but it remains clear, and with more rain predicted in the future we should be good to go.

There are still a lively bunch of sea-trout around but I fear that without a show of law enforcement we stand to lose a large amount of our stocks. The poachers are making a come back fishing bait, jigging and just plain over kill to a point that all the time invested by the Miramichi Headwater Salmon Federation in restocking the sea-trout will be for nothing.

I would also like to point out that for those who call my shop or stop in to check on the fishing conditions please be aware I’ll tell you the truth so don’t kill the messenger. It’s not my fault the fish are returning slower than  you would like to see, blame it on the striped bass, seals, overfishing at sea, salmon farms or whatever. Remember every fish you kill is one less in the gene pool and it’s not necessary to play a large salmon to death just to get a picture of it. Well, enough raving from me. There are fish in the river.

Flies of choice are: Bombers, Willy Whiskers, Jigaboos, and Bugs.

W. W. Doak and Sons in Doaktown said angling was looking good, with good fishing last weekend and early this week, especially for the time of year.  There was about a 50/50 ratio of salmon to grilse.  The salmon were considered to be good sized, with many getting away.  Water conditions were close to perfect. There were only a few odd trout reports in the 14 to 16 inch range, but trout fishing was over-shadowed by the salmon from here on.

Derek Munn of Ledges Inn in Doaktown and Mountain Channel in the Rapids area said anglers were seeing fish moving through, but they were not taking well.  The water was getting warm with temperatures in the high 60s Fahrenheit to the low 70s.  Rain was needed to bring temperatures down, and was in the forecast.  The water height was good, but heavy thundershowers on Tuesday could have changed that.

Flies of choice were White-tailed Green Machines and Conrads.

Herb Barry Sr. of Herb’s Fly Shop on the Station Road in Blackville said there were lots of fish for the time of year, but they were not always taking well.  Many anglers were seeing fish. More so than hooking them.  Herb Sr. had caught a grilse.  There was a good mix of salmon and grilse, but many anglers were loosing grilse because they were so lively and active when hooked.

Curtis Miramichi River Outfitting in Blackville said fishing was good and water conditions were excellent, although rain was in the forecast.  There was a good mix of salmon and grilse being hooked.  The annual Splash-Down canoe run is planned for this Saturday afternoon beginning at the Mouth of the Cains River and finishing at the Blackville Park.

Flies of choice were Undertakers, White-tailed Green Machines and Butterflies.

George Routledge of George’s Fly Shop at the Mouth of Renous in Quarryville said angling had been good until Tuesday of this week.  Anglers were picking up fish on the in-coming tide in the mornings along with a few in the late evenings.  There were four hooked in the Renous and one on the Main Southwest Tuesday.  The water was getting a tad low and quite warm, but rain in the forecast should alleviate both problems.  The fish were not holding, rather they were moving right on through.

Jim Laws of Miramichi Hunting and Fishing in Newcastle, Miramichi reported that he was also getting mixed messages.  He’d heard it was slow the first of the week, while others were saying there were some fish, with both salmon and grilse reported.  The water was getting on the low side, but not dangerously low by any means.  With rain in the forecast, conditions should improve.  Reports of Striped Bass were quiet.

Syd Matchett of Trout Brook Fly Shop on the Northwest Miramichi said angling was quiet with only the odd fish being reported.  Anglers had been hoping for an improvement early this week, but it didn’t happen.  There was only the odd pull and a few splashes to speak of.  There were some fish being seen on the Little Southwest Miramichi, but they were not taking well.  Stephen Foran and Todd LeBlanc each reported a grilse, and last week Percy Murdock, “The Singing Hoochie-Couchie Man” caught the only fish at one pool.  A good rain would improve conditions.

Debbie Norton of Upper Oxbow Outdoor Adventures on the Little Southwest Miramichi said angling had been good, but slowed on the weekend.  Paul Elson had hooked four grilse, Jason Soucy a salmon and a grilse, Geoff Giffin a salmon and a grilse and Bob Norton a 15-pound salmon.  The water was a bit on the low side, but rain was in the forecast.  Norton noted that the annual Miramichi Classic was coming up, starting on the evening of July 14 and finishing on the 17th.  Tickets for the banquet were $50, and were available from Nola at MSA at (506)622-1781.

So, with down-pours from thunder showers on Tuesday night, and rain scheduled for the latter part of the week, along with cooler temperatures, it is time to get out and “on the water”. 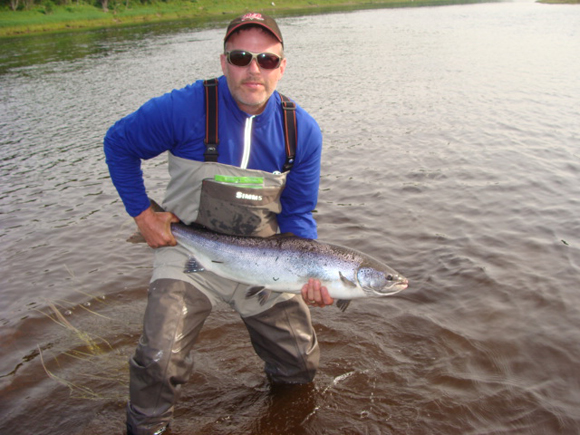 From Kevin Pugh: Here is a pic of Salmon I caught at the Mouth of the Cains River Pool on the morning of Sunday June 23, 2013. I’m guessing it was in the 25lb range. Hooked on a Shady Lady. It was the fifth of six Salmon caught in three days. A lot of Salmon and very few grilse.

Thought for the Week: “The solution to any problem — work, love, money, whatever — is to go fishing, and the worse the problem, the longer the trip should be.” –John Gierach

A highly intense period of field work has largely been completed by ASF Researchers. Read more of the details on the ASF RESEARCH BLOG:
http://asf.ca/research-in-the-field.html

DFO’s own announcement provides some details as well as background to the program.
http://www.asf.ca/canadian-government-launches-recreational-fisheries-conserv.html

Application forms and guidelines for the new conservation partnership program are available at the page below:
http://www.dfo-mpo.gc.ca/habitat/rfcpp-ppcpr/index-eng.asp

Monte Burke provides a particularly insightful response to the Greenland decision in Forbes that is well worth reading:
http://www.asf.ca/atlantic-salmon-with-a-new-and-dangerous-threat.html

From the MSA:
Hi All

Well from all reports there are salmon and grilse being caught all over the watershed. This is great news as many were holding their breath waiting to see if we were going to have a repeat of last year’s dismal returns. MSA President Mark Hambrook and our Director of Development and Communications, Stephen Tonning, spent Monday and Tuesday visiting camps on the Northwest Miramichi and Southwest Miramichi and everywhere they went people were catching fish and were optimistic about the prospects for a great season. The only complaints I have heard are from staff that haven’t been able to get out fishing yet.

As of June 16th no salmon or grilse had made their way to the Northwest Barrier however. The same week last year saw 4 grilse and 25 salmon arrive. 410 trout reached the Northwest barrier by last week as compared to 399 by the same week in 2012. The Dungarvon Barrier had a little better luck with 6 grilse and 15 salmon as of June 16th, compared to a total of 10 grilse and 6 salmon up to the same week last year. The Cassilis and Millerton traps are fishing daily and catches have been consistent and similar to past years but now numbers are on the way up. The Cassilis trap however has been catching many bass (upwards of 300 daily) and gaspereaux which is hindering the salmon catch. We are still waiting on results of DFO’s bass studies and are waiting to hear on a bass retention season for August.

Breviro Caviar has been leasing facilities at the hatchery here in South Esk for the past year to raise sturgeon but will be removing the fish beginning next week and taking them to their facility in Charlo. We have completed a feasibility study and are considering our next move – whether to upgrade the facility to accommodate other species, etc. We wish Breviro the best of luck and will miss having the sturgeon on site.

DFO has announced the new federal habitat grant program – the Recreational Fisheries Conservation Partnerships Program. This Program forms a key component of the Government of Canada’s conservation agenda and aligns with the Government’s commitment to better protect Canada’s fisheries. The program aims to bring like-minded partners and their resources together with the common goal of enhancing Canada’s recreational fisheries.  The long term goal of the program is to enhance the sustainability and ongoing productivity of Canada’s recreational fisheries, which would be achieved through restoring, rebuilding and rehabilitating recreational fisheries habitat. The MSA is reviewing the program and most likely will be submitting an application, perhaps in partnership with ASF, for a cold water sanctuary project.

The MSA Salmon Classic is being held again this year from July 14th – 17th and we have closed our registration with 59 anglers from Ontario, Quebec, Nova Scotia, New Brunswick, Maine, New Hampshire, Vermont, Massachusetts, Virginia and Florida planning to join us. As part of the Salmon Classic and to continue celebrating our 60th anniversary will be holding a Banquet on Sunday the 14th of July at the Rodd Miramichi and everyone is welcome. Tickets for the banquet are available at $50 each – please contact me if you would like to join us.

And finally – please check out the editorial from the Miramichi Leader this week – http://www.miramichisalmon.ca/editorial-we-must-figure-out-whats-happening-to-salmon-population/

The Fishermen Pow Wow: Spirit of Peace and Friendship Gathering will provide an opportunity for First Nations and other cultures prominent in Atlantic Canada to come together to celebrate and renew alliances that reflect the significance of historical relationships.

Click here for more information and schedule of events: https://www.giverontheriver.com/blog/2013/06/20/fishermen-pow-wow/