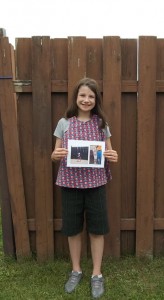 My definition of beauty changed when we moved to Miramichi in 2006. Up until then most of my life had been spent on the west coast of Canada surrounded by giant trees and grand mountains, and the Pacific Ocean was a close friend. I was so used to scenery on a large scale, so used to the landscape being intimidatingly beautiful that I didn’t think I could ever find another area of Canada as breathtaking.

However, things change. When we packed up and moved from one coast to the other I was ready for a new view. I’d forgotten that the trees were big. I was no longer in awe of the coastal mountains and I never thought to go to the beach. All the beauty of my BC surroundings were overshadowed by the drug dealers in my neighbourhood, the graffiti on every sign post and brick wall, and the traffic, the traffic, the traffic!

The first time I laid eyes on Miramichi, they were sleepy ones. I’d taken a red eye flight in from Vancouver to come apartment hunting with my husband who’d moved to Miramichi ahead of my daughter and I. But even with blurry eyes and a lack of coffee headache, I knew I was looking at home. My heart and my soul immediately connected with the bright green hills, the trees I could see the tops of and the sparkling, soothing Miramichi River.

While taking in the view from the front door of what would be our first home on our new coast, I realized that while the landscape of Vancouver and of my hometown Victoria were incredible, I’d never felt a part of it.

As I said earlier, to me the view had always been intimidatingly beautiful. Other people I knew relished hiking up the steep mountain paths amongst the tall, tall trees, but I had always found them a little scary. I’m not a big person and so I often felt dwarfed by their size and always out of place when in the middle of them. While the Pacific Ocean is immense and fascinating, not being able to see across it always made me feel a little lost and sad.

But now, now I was in the midst of hills I could walk up, of trees that rose gently above me, and friends with a breathtaking river I could see to the other side. It was beauty on a smaller scale, but it was accessible and something I wanted to be a part of and not just exist in or near by.

So, what does this have to do with the picture of my daughter and her Canada Day dress? The dress, for those of you who aren’t familiar with our tradition, that Sorcha has put on every Canada Day for 10 years and patiently has her picture taken while holding a picture of herself in the dress from the year before? Well, it’s all about change.

Last year I wrote about traditions and how they change over time. Sometimes they change because you want them to and sometimes they change because they need to. While growing up in BC, I never longed for change. When we moved to Ottawa when I was a teen, I thought my life was over and it wasn’t until we moved back to Victoria that I started to appreciate that change is actually a good thing. Change gives opportunity, scope and often much needed new air to life. Not all change is good, but being able to roll with it and find the positive even in the negative can keep you growing as person.

The Canada Day dress no longer fits. That’s a change we knew would happen. Most Canada Days Sorcha was able to get the dress on for her annual picture fairly easily. Last year the dress was forced onto Sorcha and this year, if you look closely at the picture, you’ll see that she is not wearing her dress and that it is lying on her body.

It’s a fitting end to a tradition that unexpectedly began in 2003 when Sorcha was only 20 months old. The first and the last picture are like bookends and in between the photos the changes that have occurred in my life that are so many I would have to write a book to list them all.

Most of the changes, such as our move to Miramichi have been for the better. They have helped me to accept that no matter what life tosses my way, I can handle it. My lovely daughter is changing every day and is becoming a person so extraordinary that I can hardly believe she’s mine. She too has transformed my definition of beauty for she represents all the wonderful things that can happen in life if you learn to embrace change.

Cindy Rule is a frequent contributor to Bread ‘n Molasses. She lives in Miramichi, NB with her husband, Sean and daughter, Sorcha.