The big news this week is the closure of a large number of cold-water pools until conditions approve.  As of Wednesday July 17 a list of closures are in affect until further notice.  For the official version, please follow the link.  A summarized version is below in the MSA newsletter.

On the positive side, rain is in the forecast during the next few days.  Let’s hope it is sufficient to do the trick and have our rivers opened ASAP. 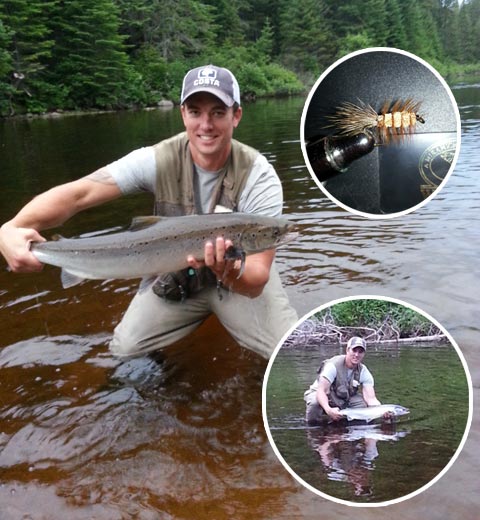 Sean Dolan hooked this bright salmon Wednesday night on a tributary of the Miramichi with a brown bug #6 natural deer tail fished dry.

Doug White’s Tammerack Sports Fly Shop in Juniper said there wasn’t much to report this time. With no relief in sight, the heat and warm water has driven all but a few diehard fishermen inside to an  A/C environment. The water is so low the salmon have about as much chance navigating up through the rocks as  getting past gillnets.

Flies of choice are: SMALL Bugs, Wet flies and dries in the 8 & 10 sizes

W. W. Doak and Sons in Doaktown said not many fish were being caught as the water temperatures were very warm.  The fish were there, but simply were not taking flies.  A few were being hooked in cold-water pools.  Over all, not many anglers were on the water, except for very early mornings.

Flies of choice were Dry Flies, Bombers and Bugs.

Derek Munn of Ledges Inn in Doaktown and Mountain Channel in the Rapids area said as you already know the water is low and warm.  We had decent fishing up until Saturday. We had a group at Mountain Channel for 3 days that left on Saturday after lunch with 5 guys hooking 22 fish. At Ledges we were picking up 4 or 5 fish a day early in the morning, and nothing in the evenings.

Flies of choice are blue and white bombers and small flies in black patterns.

Herb Barry Sr. of Herb’s Fly Shop on the Station Road in Blackville said the water was too hot and too low to fish.  It was too hard on the fish to even go to the river.

Flies of choice were small no. 8 Bear Hairs and a variety of Bombers.

Curtis Miramichi River Outfitting in Blackville said fishing was very poor due to low and warm water.  Anglers were seeing fish, but very few were taking.  Cooler temperatures and a good rain were needed to improve conditions.

George Routledge of George’s Fly Shop at the Mouth of Renous in Quarryville said the river was in bad shape with water low and temperatures in the 84 degree range Fahrenheit on Sunday and Monday noon.  If a fish was hooked, it was going to die.  Cooler temperatures and rain were needed.

Jim Laws of Miramichi Hunting and Fishing in Newcastle, Miramichi reported angling as very slow due to low water and high temperatures.  “The rivers need a good rain to freshen things up and cool off” he said.

Syd Matchett of Trout Brook Fly Shop on the Northwest Miramichi said angling was very quiet with very low water, very warm water and very few fish.  Most anglers were not even going to the river.  The Stoney Brook Crew on Crown Reserve did hook one fish Tuesday, but saw no others.  A good rain is needed.

Debbie Norton of Upper Oxbow Outdoor Adventures on the Little Southwest Miramichi was unavailable for comment this week.

So hope for enough rain and cooler temperatures so we all can get back “on the water”.

Thought for the Week: From the dry wit of old Mark Twain “There is no use in walking five miles to fish when you can depend on being just as unsuccessful near home.” 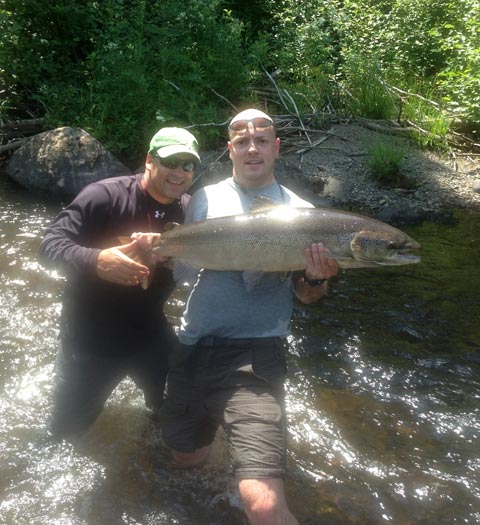 My name is Mark O’Regan from Grand Falls, NB and after discussing with many of your report followers felt compelled to contact you to advise that I was very fortunate to have hooked and landed the largest fish of my SF career this past weekend on the Dungarvon. Together with my “net man” Troy Duguay, Grand Falls we managed to carefully land this large fish. Caught on a large green bodied dry fly with white wings.

The fish is a large “male hook bill” with measureables of 41+ inches “and change” in length, with 25 inches of girth suggesting a weight of approx 33-34 lbs. What a magnificent specimen.

I have attached a photo of myself (right in the grey shirt) with the fish, with my friend Troy (in the black on the left). I thought others might enjoy seeing this via your weekly fishing report (which we all enjoy every Thursday) and truly appreciate the prospect that we still have these giants in our rivers!

Fantastic experience.
Thanks in advance.

Hi All
I hope everyone is enjoying this great weather. In an earlier email I tried to explain the warm water protocol that will come into effect should water temperatures dictate. Basically if we have 48 hours where the minimum river temperature at Doaktown is 20 degrees or more then DFO will close 15 cold water holding pools. If we have 48 hours where the minimum water temperature is 23 degrees or more then DFO will impose morning fishing only. When air temperatures drop at night to 10 – 12 degrees, as has been happening the last while, the water temperature does have a chance to get below 20 degrees and thus the salmon have a break. Unfortunately it looks like after tonight the temperature at night will not be dropping that low – Miramichi forecast is for highs of 30 / 31 and lows of 18 / 22 over the next week – and thus the river temperature may not drop at night. The salmon will undergo great stress at these temperatures and we encourage people to respect the closures should they be called. DFO will issue a variation order should any closure come into effect and these orders can be found on their website and I will also post them on ours. I will be speaking with DFO on Monday morning and will send out updates by email.

DFO uses the temperatures at Doaktown as that is where their monitoring station is. Just this past week MREAC installed monitors at Doaktown and at Upper Oxbow on the Little Southwest Miramichi. A link to their site can be found on our site (www.miramichisalmon.ca)  under Quick links – or go directly to it at http://mreac.org/realtime_water.html . These stations update hourly to the site – 7 days a week. I noticed today the Doaktown station is not working but the LSW station is providing data.

There was good news from the barriers last week. As of July 7th the Northwest Barrier held 122 salmon and 70 grilse. This was up from 75 salmon and 27 grilse the week before. In comparison to 2012 – that same week last year we were at 89 salmon and 41 grilse. The trap net at Cassilis had not been producing big numbers until yesterday when 26 grilse and 11 salmon went through. Let’s hope this warm weather does not impede their progress. There were also 1007 trout at the barrier – compared to 719 same time last year.

DFO does post trap and barrier numbers the middle and end of each month – these can be found at http://www.inter.dfo-mpo.gc.ca/Gulf/asir/count?period=0615&group=1 or click the DFO Salmon Counts Quick Link on our home page.

DFO has announced a second retention period for striped bass for this season. This limited recreational retention fishery will be open from August 2 to August 11, 2013. During that time, anglers will be able to catch and retain a maximum of one Striped bass per day and will be prohibited from possessing more than one Striped bass at any given time. Following the retention period, there will be a catch and release fishery from August 12, 2013 until September 30, 2013 inclusively. To read the press release go to http://www.miramichisalmon.ca/second-retention-period-for-the-recreational-striped-bass-fishery-in-the-southern-gulf-of-st-lawrence/.

MSA staff finished stocking out salmon fry this past week. We continue to monitor the receivers in the river to see if the tagged salmon have returned; and are preparing for electrofishing which will begin the end of this month. Next week we will be busy with the Salmon Classic – 60 anglers will be joining us for 3 days of fishing – hopefully the water levels and temperatures will cooperate. We are holding a banquet Sunday evening at the Rodd Miramichi and tickets are still available – respond to this email if you would like tickets. 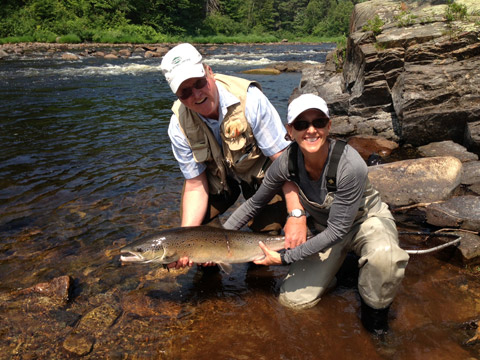 Research field notes has been updated, with more on pop-up salmon tags.
http://www.asf.ca/research-in-the-field.html

HOW BIG WAS THAT FISH?
The Atlantic Salmon Federation has devised a length/weight table, called a Salmometer. It enables the angler to estimate the weight of the salmon once its length  has been measured. (In catch-and-release angling it is not advisable to weigh the fish; there is too great a danger of fatally injuring the fish.) The length of the fish must be measured from the tip of the nose to the fork of the tail.  Look up the length in the Salmometer, given in both inches and centimetres, to determine the weight, in pounds and kilograms, immediately to the right. Length and weight data from different river systems were used to prepare the Salmometer. Salmon from other rivers may differ somewhat in shape, so the precise weight of your salmon may be slightly higher or lower than the figure given in the Salmometer.