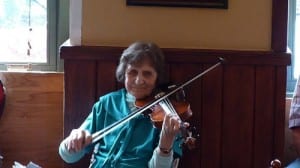 The first time I heard Matilda Murdoch play her fiddle I was attending a Writers’ Federation of New Brunswick banquet at the Rodd Hotel in Miramichi. It was April 18th, 2004. At the time I wrote:

“I’m in the banquet room at the Rodd, sitting alone, because I can’t trust my emotion not to give way in front of the others. Matilda Murdoch is playing the fiddle. I’m transported back in time to 1800′s Ireland. I’m moved to tears. I may have to leave. I feel heart ache, starvation, death — I feel it in my very core. These are my people. I’m Irish and for the first time I feel it. I really feel it. Like I’m at a wedding, like we could all break out in a reel or jig. It’s sadness. It’s pain. It runs in my blood. It’s pure beauty. 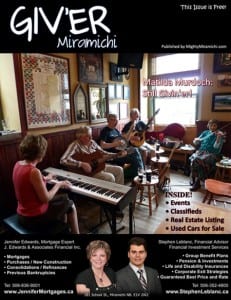 Matilda Murdoch featured on this month’s cover of Giv’er Miramichi.

Over the years I received responses from some of Matilda’s family about what I’d written. Her granddaughter, Dawn Kingston wrote me a note that said:

“My Grandmother, Matilda Murdoch is an angel here on earth! She’s awesome! Her music touches your soul! I understand what you mean when you say you were brought to tears by her music. She is an inspiration to many people and you really feel emotional when you hear her play. She has that affect on many people. I am so happy to hear you say what I’ve been feeling my whole life about my Grandmother. There is no one else like her! Thank you for your kind words.” 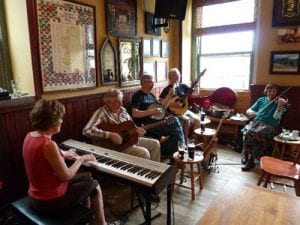 Matilda Murdoch and friends on a recent Saturday afternoon at O’Donaghue’s Pub.

And her nephew Pete Murdoch wrote:

“Aunt Mattie’s the genuine article alright–footloose and fancy free on that fiddle there. She’s a sight to see. One of her smiles is worth the stars in the sky. And all it takes to get one of them out of her is to grab a spare colleen and spin her around the living room a bit. Amen.”

I’ve seen Matilda’s greatness many times since, and each time I’ve felt the fire in her fiddler’s bow touch my soul. She’s in her 90’s now but still following her passion, writing new songs and performing often on Saturday afternoons at O’Donaghue’s Pub with friends.

The last time I saw her was one such Saturday afternoon earlier this summer. The pub was packed to the rafters with an audience keen to hear her play. I was particularly excited because my out of town friends had never heard her play, and Matilda did not disappoint. With toes tapping, hands clapping, my heart swelled with pride as my friends’ eyes widened. Oh the life in that great lady! Her passion represents everything good about the Miramichi.

The next time you’re in the area on a Saturday afternoon, drop by O’Donaghue’s and you might just be lucky enough to witness again, or for the very first time, the living legend that is Matilda Murdoch—a Miramichier who truly knows how to Giv’er!

Matilda Murdoch appears on the August 2013 cover of “Giv’er Miramichi”, Miramichi’s newest monthly magazine published by Mighty Miramichi. Look for it in your mail or in restaurants, hotels, shops, and waiting rooms throughout the greater Miramichi region.