There is still plenty of water in all of the rivers which is not making getting to the water an easy chore.  However, this is a much better scenario for August than the traditional low and warm water of an usual August.  At least it is good for the fish.  There are not many fresh fish coming into the system, so we are anticipating (and keeping our fingers crossed) a Fall Run to begin soon.  There are some fish being hooked throughout the system, but not in any great numbers.

Doug White’s Tammerack Sports Fly Shop in Juniper said the water is dropping off nicely and by the weekend there should be some action. Last week even with the water as high as it was, people were catching fish. The South Branch, largely ignored, was turning on nicely with some really good hook-ups reported.

W. W. Doak and Sons in Doaktown said angling conditions were good, especially for August.  The water was a good temperature and just a tad high, but fishable.  There were fish around, but they were moving rather than holding.  Anglers were picking up a few here and there, but in no great amounts.  Generally, the river could drop about a foot in the Doaktown/Boiestown area, and a 1 11/2 feet in the Blackville area.  They estimated that the temperature of the water to be about 10-12 degrees cooler than a normal August temperature.  However, there were not many anglers out.  They were hoping that the full moon on Tuesday August 20 would bring in some fresh fish.

Doak has just activated a new hourly Water Flow feature on their website which might be of interest, along with some updated links to a number of useful sites.  The Water Flow link is on the upper left side of the WWDOAK.COM home page under Miramichi Water Flow Data. They hope you find it helpful. 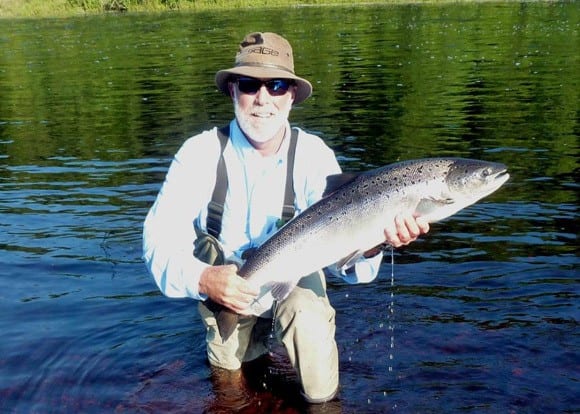 Derek Munn of Ledges Inn in Doaktown and Mountain Channel in the Rapids area said the water is getting back to normal, it is still a little high but a very good height for this time of year. They are having fair fishing catching 4 or 5 fish a day mostly salmon. The fish are mostly all fish that been in the river for awhile we haven’t seen many fresh fish the last couple of weeks.  Mountain Channel is still very high so they been fishing some other tributaries and been having some luck especially on the Cains.

Herb Barry Sr. of Herb’s Fly Shop on the Station Road in Blackville said angling was pretty slow with very few fishing and only the odd fish being caught.  The water was still high, but out of the alders.  “It’s only touching them now and at least you can hold on to them without fear of drowning” said Herb.  He had heard of some catching at the Mouth of the Bartholomew and on the Cains.

Herb Jr. did get a nice birthday present last Sunday as he hooked and landed a nice big grilse.

Curtis Miramichi River Outfitting in Blackville said the water was still high, but anglers were picking up a few fish.  Some were still using boats.  There was a 12-15 pound salmon hooked on the Dungarvon and a grilse at the Mouth of the Bartholomew.

We’ll have to find out what brand of perfume Norma Brennan Was wearing as she certainly attracted at least one fish.  It nearly jumped into her canoe with her and gave her bathing suit a pretty good splash.

George Routledge of George’s Fly Shop at the Mouth of Renous in Quarryville said there were still not many fish around and even fewer anglers.  The fish that are being seen are large salmon.  The water was still high, but dropping steadily.  He noted that there was not one angler all day Tuesday at Quarryville.  One member of the Dieppe Fly-Tying Club did pick up a fish on a Yellow Butterfly “tied the way George ties them”.

Flies of choice were White-tailed Green Machines and Black Ghosts on nos. 4 & 6 hooks.

Jim Laws of Miramichi Hunting and Fishing in Newcastle, Miramichi reported lots of water and slow angling.  He’d heard of the odd fish being hooked here and there, but not in any great numbers.

Flies of choice were Same-Thing-Murrays, White-tailed Green Machines, Bear Hairs (anything green) along with a few dry flies.

Syd Matchett of Trout Brook Fly Shop on the Northwest Miramichi said water conditions were excellent, but catching was spotty.  Some anglers reported seeing fish, but were unable to get them to take.  Generally, there were not a lot of anglers on the water.  Chris Edmonds hooked a fish Monday morning, and Jacob Ashton hooked and lost a grilse.  There were some reported caught below the Big Hole.  Syd was hoping Tuesday’s full moon would have brought fresh fish into the system.

Flies of choice were White-tailed Green Machines, and Bear Hairs with a variety of butts such as green, red and orange on nos. 6 & 8 hooks.

Debbie Norton of Upper Oxbow Outdoor Adventures on the Little Southwest Miramichi said the water there was still high, but cool and dropping.  They had seen one fish jump on Monday and there were fish in the system, although not many fresh ones.  Anglers were only catching the odd one.

So hopefully we don’t get too much rain before the weekend so we can get out and “on the water”.

Thought for the Week: “Of course, folks fish for different reasons.  There are enough aspects of angling to satisfy the aspirations of people remarkably unalike.” Maurice Wiggin

Is there any word on the retention for striped bass being prolonged? We don’t hear anything about the striped bass. The best fishing will probably be Sept, Oct  and Nov.  In the Bay of Fundy waters you are allowed to fish 24 hours a day/ 7 days a week 365 days a year in tidal waters. Kind of sucks that one would have to drive to Saint John or Fredericton Or all of the other BOF waters this fall to go after some stripers, while our rivers will be full of them. I believe in catch and release but would like to take a fish once and a while for the BBQ.
I heard a rumor that there were over one million stripers in the Miramichi River this spring. Not to mention all of the other rivers in the Northumberland Strait that have large numbers of stripers.
Seems like we could talk about this all day but there are no responses from DFO on the issue.
Regards,
Morgan Flanagan
____________________________________________________ 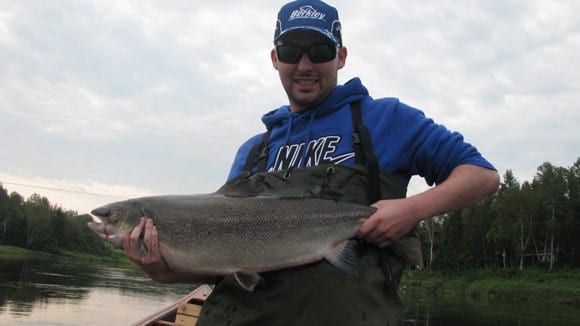 Jonathon Underhill hooking a salmon on a fly that he tied

On Tuesday, August 20th the MVHS Fly Fishing Club fished the Main Southwest Miramichi.  We had 10 club members on the water fishing pools like Campbell’s, Belanger’s and Hershey’s. We had a total of 8 tight lines: 5 grilse and 3 salmon. Some of the highlights include Bronson Matchett hooking his first grilse, Jonathon Underhill hooking a salmon on a fly that he tied and Zachary Legere landing his first Atlantic Salmon. Flies of choice include: Green machines, Green Bomber with orange hackle, Jacob Smith’s Ally Shrimp and Johnny’s Yellow Sunshine Bug. Many thanks to river guides Jason Curtis, Tony Svarc and Dale Taylor. As well, this opportunity would not be possible without the generosity of the owners/caretakers of those pools. Awesome day for all those involved… 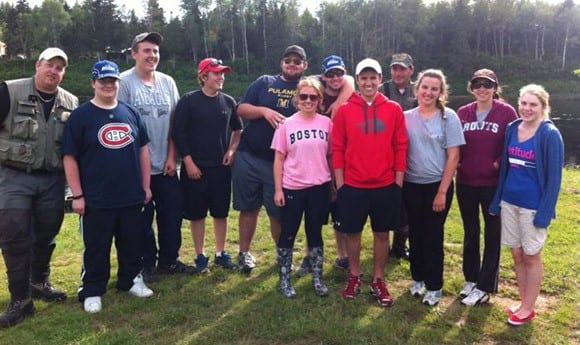 Fr: Jacques Heroux:
Hi everyone….very good news,
Someone put forward the nomination of our Fly Tying Club to be inducted into the Atlantic Salmon Hall of Fame and we were accepted……cool and well deserved for all of us!

The Hall of Fame Dinner will be in Doaktown on September 14th at the Curling Club. Cost of a ticket is 75$/ person. It is also their major fund raising activity of the year. If you want to attend the Dinner, you have to call the Museum (see the attachment below) and reserve your ticket ASAP.

Good day Doug,
I am a member of the Board of Directors for the Atlantic Salmon Museum in Doaktown, NB and we are having our Annual Hall of Fame Dinner on Saturday September 14th. Please find attached a copy of the press release for the dinner itself and also a letter of request for donations for our silent and live auctions for that event.

Tickets are available and any donations are most welcome.

Thanks and enjoy the rest of the fishing season and hope to see you at the event!
Kim Brennan
Director
Atlantic Salmon Museum. 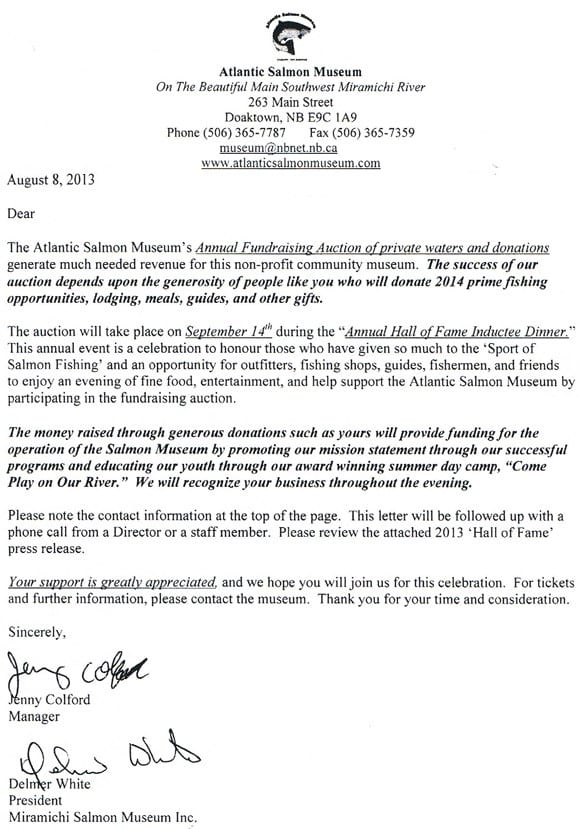 A buffet style dinner including beef, salmon and fiddleheads will be served at the Curling Club at 6 p.m. The price for this special event is $75, and a tax receipt for $40 will be issued. A limited number of tickets are available, and they go quickly. During the banquet, there will be a live auction of 2014 donated fishing waters plus much more. Please call (506) 365-7787 to pay for your ticket or stop by the Museum, 263 Main Street in Doaktown. 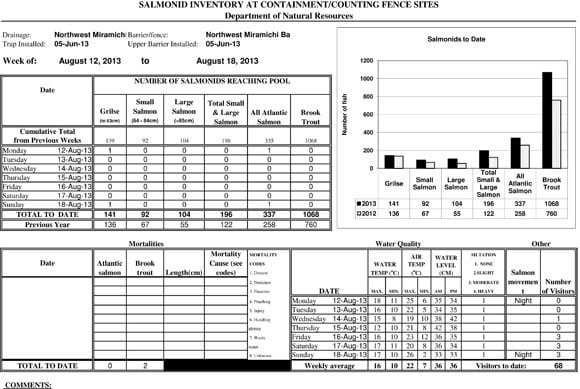 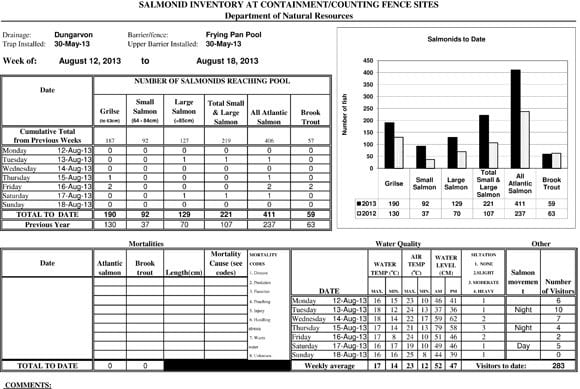