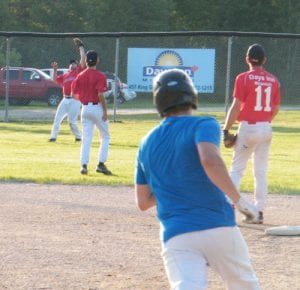 Stephen Boulay makes a grab in the outfield, dashing the hopes of the Douglasfield Dodgers.

As the Miramichi Men’s Fastpitch season draws to a close, the action continued into the final game Monday night.

The Nelson ‘Days Inn’ Red Sox and the Douglasfield Dodgers had it out, as the Sox looked to tie their old rivals, the Miramichi ‘Towne Ford’ Rangers for top spot in the league standings.

Dan Goodin did his part for the Nelson club, notching 12 strikeouts, and offering up a home run when called to the plate. Not to be outdone, Douglasfield hurler Devon McKenzie threw eight batters a chair, and made some offensive offerings in the form of a double and a single; John Cortes led the Dodgers offensively with a triple and two singles.

The League’s play-offs begin this week, with Thursday and Friday’s games getting underway in Eel Ground, and the weekend finale taking place at the King and Doyle Fields as part of the Remembering Nelson Fair.