For August, the fishing is not bad, but over all, it is only fair.  Fish are being seen, but not always in a taking mood.  Some are being caught with most being dark, although there are small numbers of brights dribbling through the system.  Most are hoping for a good Fall run which we did not have last year, so the clock is ticking.

The water levels are gradually getting back to normal, although still high in places.  Let’s hope we do not get hit with another big deluge in the near future.

The trapnets had a few fish go through last week, but since then there were days with none and the odd days with only a few.  The Fall run certainly has not started yet. 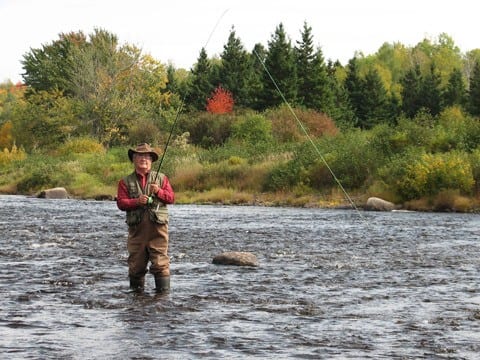 Doug White’s Tammerack Sports Fly Shop in Juniper said there was not much too to report.  The river is a tad high but very fishable and all reports point to salmon in the pools. However, very few people are out.  He had talked to several fishermen about the lack of activity on the water and it seems the poor economy is playing a large part, price of fuel, and with the high water most of the season, many are writing this year off.

W. W. Doak and Sons in Doaktown said water conditions were good both in height and temperature and there were some fish around, but they were moving.  There were even a few brights, but most were dark.  Not a lot of locals were fishing, but the camps had decent numbers of sports. Over all it was good fishing for August.

Flies of choice were Same-Thing-Murrays, Shady Ladies and White-tailed Green Machines along with some Fall patterns.

Derek Munn of Ledges Inn in Doaktown and Mountain Channel in the Rapids area said they were having fair fishing.  The water is near perfect height and temperature.  They were catching mostly salmon. There were lots of fishing showing but very fussy about taking a fly.  You really have to work for the ones you hook.

Flies of choice are bigger patterns like the Paul Caron Stonefly, Pacasse and a Blue Bombers.

Herb Barry Sr. of Herb’s Fly Shop on the Station Road in Blackville said he had not seen a fish in six days.  The water was close to perfect in both height and temperature.  He was keeping his fingers crossed that we get a good Fall run.

Flies of choice were a variety of Bombers, Cascades and Fall patterns such as Ally’s Shrimps and General Practitioners.

Curtis Miramichi River Outfitting in Blackville said water conditions were good and there were fish around, but they were not taking well.  There were some being hooked and they were mostly grilse, and big ones.  Canoeing conditions were very good.

George Routledge of George’s Fly Shop at the Mouth of Renous in Quarryville said angling was pretty slow.  There were not many fishing, and not many being caught.  The water was dropping, but still high in the Main Southwest and very high in the Renous.

Flies of choice were White-tailed Green Machines, Butterflies, and Shady Ladies with white tails, Black Ghosts and Routledges.  Anglers were using no. 4 hooks on the Renous and no. 6s on the Main river.

Jim Laws of Miramichi Hunting and Fishing in Newcastle, Miramichi reported the water still a tad on the high side with good temperatures.  There were some fish being caught, but in no great numbers.  Striped Bass are starting to make their way back into the Miramichi, so the hook n’ release fishing should soon be better.

Flies of choice were Bombers and Dry Flies, White-tailed Green Machines and the Fall patterns such as the Ally’s Shrimps.

Syd Matchett of Trout Brook Fly Shop on the Northwest Miramichi said angling was pretty quiet, although it had been decent on the weekend.  Chris Edmonds did hook and release a salmon and two grilse Tuesday.  But generally there were only dribbles and drabs of fish here and there.  Most were dark.

Flies of choice were White-tailed Green Machines, Green Machines with red and green butts with Krystal Flash and Shady Ladies on no. 6 hooks.

Debbie Norton of Upper Oxbow Outdoor Adventures on the Little Southwest Miramichi said the best they could do was a couple of trout.  No salmon or grilse were caught, but water conditions were perfect.  She had heard not so good news about Miramichi Lake where DFO has been trying to eradicate the Small Mouth Bass from its waters so they don’t get into the Miramichi River system.  Apparently, this year they caught more yearlings off-spring than they did last year.  So there is still a problem with them reproducing in the lake.

Flies of choice were White-tailed Green Machines and Undertakers.

So keep on the look out for the start of a Fall run so we can get out and “on the water”.

Thought for the Week: “The day was fine—not another hook in the brook”.  Daniel Webster