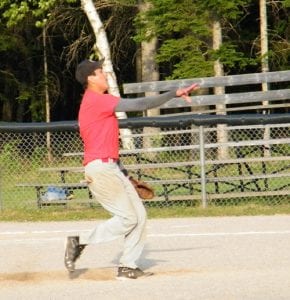 Travis Nevin gets the win for the Eel Ground Eagles, defeating the Douglasfield Dodgers on Monday Night.

This week’s action in the Miramichi Men’s Fastpitch league began when the Eel Ground Eagles claimed victory over the Douglasfield Dodgers by a score of 8-2 Monday night.

Travis Nevin led the Eagles from the mound with 15 strikeouts, and offered two home runs on the offensive side of things. Chris Ryan also put two over the fence, as the ever proficient Eagles’ bats were brought to bear on the youthful Dodgers. Devon Mackenzie and Ryan Doyle combined for seven strikeouts against the Eagles.

The Red Sox got on the board early putting up three runs in the first on the strength of a couple of doubles by Jake Nicholson and Ransen Harris, but the Brewers responded in the bottom half as Joey Ryan doubled in two runs, cutting the lead to 3-2.

Joey Ryan, who notched 3 RBI in the “Jungle Jim’ Brewers’ win over the ‘Nelson Days Inn’ Red Sox, makes a close play a first base.

The Brewers went on to tie the game in the fourth, go ahead in the fifth, only to see the Red Sox square it up again in the sixth. Ben O’Toole was the hero for the Brewers in the bottom half of the eighth, as he singled in the winning run. Blake Lynch earned his first win on the year, striking out three along the way. Dan Goodin struck out nine in the loss.

Rain sealed the fate of Tuesday and Wednesday night’s games, making this report a short one.

Here’s how things shake down in the Men’s League, after 13 weeks of play: