With the exception of the Bartibog, Burnt Church and Tabusintac Rivers which close October 29, the angling season for the Miramichi is over for another year.  Now it is time to reflect on what kind of a season it was, and perhaps what should be done to improve it for the future.  I have contacted many of the people who helped make this column possible with their reports and asked them to give an overview. 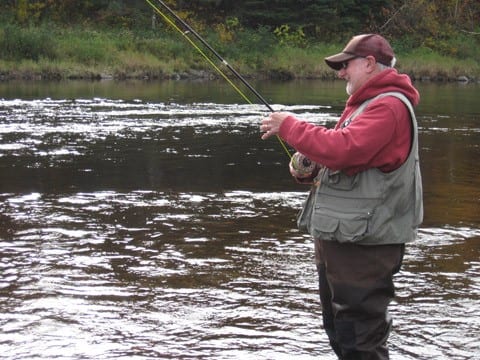 W. W. Doak and Sons in Doaktown said the end of the season had good water conditions for the fish.  There seemed to be some fish around, but they were not taking well, although some were picking up a few.  Over all, the season was a positive one in terms of water conditions for the fish, but not so great for catching.  The salmon counts seemed decent, compared to last year, but the grilse counts were down.  The season was an improvement over last year, but certainly not as productive as two years ago.  They were hoping for a good season next year.

Herb Barry Sr. of Herb’s Fly Shop on the Station Road in Blackville said it could have been a better season if we had had better water conditions.  He classified this season as “pretty fair”, although the “high water played havoc with the fishing”.  He noted that naturally, everybody would like to have caught more fish, but at least it was a better season than last year.  He noted that two years ago the fishing was terrific almost the whole season.  He said this year reminded him of seasons 20 years ago when anglers would have to wait for the runs to come to get their fish.  There would be good times and bad times.  Two years ago the fishing was continuous.  This year the weather with lots of rain played a big part in when they could fish.  But most of the locals were satisfied.  Barry also added he would like to thank all of his customers who supported him, and that he was looking forward to next year.

Curtis Miramichi River Outfitting in Blackville said the last day or two was very quiet with no anglers coming into the shop.  There were reports of fish being seen on the Cains, but not taking well.  Over all it was a great season for the fish in terms of water conditions, but maybe not so for the anglers.  Hopefully, the spring fishing will be good.

George Routledge of George’s Fly Shop at the Mouth of Renous in Quarryville said the season ended with one big salmon caught from a boat.  He described it as “one of the poorest we have had, and it was not because there were no fish.  It was due to the high water that prevented anglers from getting to the fish”.  “Fishermen just gave up.  There were hardly two or three out a day during the last part of the season.  There was a good period near the end of June and the first part of July, but the rest was a write-off”, said Routledge. “Hopefully, it will be much better next year!” said Routledge.

Jim Laws of Miramichi Hunting and Fishing in Newcastle, Miramichi reported a generally slow year in terms of returns.  “This winter we need some answers as to why.  This season was better than last year, but still a long way from where it should be” said Laws.

Syd Matchett of Trout Brook Fly Shop on the Northwest Miramichi said he had a funny story to end the season “The Hoochie Coochie Man” was fishing at Wayerton and caught a nice salmon.  A lady whom Syd had taught to tie flies was there and had her net, so offered to land it for him.  In the process, she asked him what fly he had caught it on.  He replied “A Copper Killer”.  She looked at the fly and then told him it looked more like a Shady Lady, and then proceeded to tell him that Syd had taught her to tie flies.
A few days later Old Percy dropped into Syd’s, and that’s when Syd said: “I hear you have a new pattern for the Copper Killer, kind of a black body with black deer hair, etc,  sort of looks like a Shady Lady .  Caught in the act!

Over all, Syd said there were a good number of salmon caught the last week.  He said the season was certainly better than last year, and certainly could have been better had it not been for high water.  Syd estimated we lost 8-10 days in August and 7 to 8 in September.  He said we still have to do a few things to get the numbers back up on the Northwest, especially in June and July.  That would be a good time to get some high water.

The final numbers at the various barriers are not yet in, but so far they are an improvement over last year.  But that said, it would not take much to improve over last season.  Hopefully, I’ll have them in the next column or two.  So if you fish the three open rivers, enjoy the last few days “on the water”.

Thought for the Week: “There he stands, draped in more equipment than a telephone lineman, trying to outwit an organism with a brain no bigger than a breadcrumb, and getting licked in the process.” – Paul O’Neil

From MSA:
Hi All
As the season draws to a close many of you are probably wondering about the research we have been involved in this season. Though the final results are not in I thought I would give you a short synopsis of where we are with the kelt tracking program.

In early May, ASF and MSA tagged 11 kelt in the Northwest Miramichi at Red Bank with satellite pop-up tags. These tags detach from the fish when they die (no movement for a certain amount of time) or at a programmed date – come to the surface and send a signal to a satellite which then provides data on where the fish travelled, depth, etc. The fish were also tagged with acoustic transmitters which allowed us to track them through the river system.

In early June the receivers in Miramichi Bay told us that 8 of the 11 tagged kelt moved into the sea, one was still in the bay, and two appeared to have remained in the river. A few days later one of the tags began transmitting in Miramichi Bay and the tag was retrieved by ASF Biologist Graham Chafe and our summer student Kelsey McGee. Using a hand held locator they found the tag buried in seaweed at the high water mark. The kelt, a 73cm female, had been tagged on May 6th and quickly moved into the bay three days later. It appears from early observations that this fish may have been preyed upon by a harbour seal. The tag will have its data extracted and then will be refurbished for use again next year.

In mid -June another one of our satellite tags had begun to transmit. This one was from a 78cm, 4.65kg female kelt that was tagged on May 6th and entered the ocean on May 13th. The tag was about 20km offshore from Cabot Beach Provincial Park, PEI. Later that same week another tag popped off in the Miramichi River. The kelt it was attached to spent a few weeks after the tagging in the same area and then met its demise. The tag was located about ten metres inland from the river’s edge, below a very tall pine tree. While searching for the tag, Graham and ASF Research Assistant Mike Best had noticed an eagle in the area and sitting atop that very tree. It seems possible that the eagle may have been the one that dropped the tag in the woods, whether or not it caught the salmon.

By the first week of July, four of the 11 tags had popped off – the fourth near the Millstream area on the North West Miramichi. We know from acoustic tracking equipment that this kelt never left the river. The seven remaining fish with tags had all left the river with some of the tags programmed to come to the surface the end of August and some the end of September. The hope was that these fish would avoid all predators and dangers until then and yield accurate data about their movements in the Gulf of St. Lawrence. Unfortunately two more popped off in July. The first was about 30km east of the tip of Gaspe and the other was about 30 km northwest of Les Îsle-de-la-Madelaine.

Two of the remaining five tags were due to pop off on August 31st. One of them popped successfully and transmitted from about 50km off the southeast end of Baffin Island. ASF staff was eager to download its data and to put together a picture of this kelt’s track and depth behaviour. Of particular interest will be the portion north of the Strait of Belle Isle.

On September 30th, the three remaining pop-up satellite tags were due to detach from their kelts and start transmitting. Only one began transmitting the next day. The tag that popped is on the coast of Labrador, north of Nain. It will be very interesting to see this fish’s track once all the data has been downloaded. Did it share the same route as the last popped tag that came off near Baffin Island? Has it stayed in Canadian waters? Graham thinks the other two tags that we should have heard from on September 30th will not likely transmit to us. Hard to say why they didn’t, could have been eaten or otherwise destroyed or the antennae broken. They transmit for about 3 weeks before the battery runs out, so there is always a chance, but it doesn’t look good. He also adds that he rate of data recovery we are getting is quite good compared to other studies, despite some tags not transmitting.

Thanks to ASF Biologist Graham Chafe for his updates on the kelt program and again to our members who generously donated to this project.

Enjoy this last weekend of the season – the weather is going to be great with nothing but sun forecast until Tuesday!