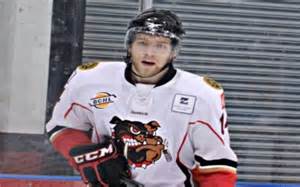 The 20 year old Walker from Castlegar, BC is a relative newcomer to the MHL, but nonetheless made his presence felt in just his second league game on Saturday night versus visiting Bridgewater. In his new club’s 6-2 victory over the Lumberjacks, Walker posted two goals and two assists and was named the game’s third star. Among his offensive outburst was an assist on the eventual game winning goal as well as scoring the insurance goal, both of which came late in the second period.

Walker makes his way east with an impressive resume of Major Junior and Junior A experience to draw from, including stints with the Vancouver Giants, Swift Current Broncos and Portland Winterhawks in the WHL. Before joining the Timberwolves, Walker most recently patrolled the blueline for Swan Valley and Dauphin in the MJHL.