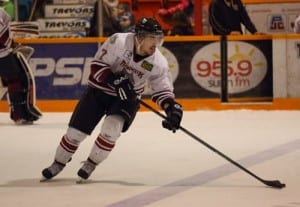 On Friday night, he assisted on the game winning goal as Miramichi defeated the Woodstock Slammers 5-3 at the Carleton County Civic Centre. The following night, the blueliner turned things up a notch, providing three helpers in the Timberwolves 4-3 victory at home over the Amherst Ramblers.

Lewis was sent to the Timberwolves on November 12th and hasn’t missed a beat despite being out of commission for several weeks with a hip injury, as his seven assists in four games can attest. Before arriving in Miramichi, the Moncton Flyers MAAA product spent parts of five seasons with the Halifax Mooseheads. He appeared in 242 regular season and play-off games combined for the Moose and served as co-captain of the team as they captured the 2013 Memorial Cup in Saskatoon this past May.

Second star honours for the week go to forward Mitchell Robillard of the Truro Bearcats while the first star goes to Valley Wildcats forward Justin Thomas.