In late January, I was approached by the Blackville Women’s Institute and asked to participate in their Heritage Day celebrations.  Heritage Week is celebrated in communities throughout New Brunswick each year. This years theme was New Brunswick Remembers: 1914-2014, in commemoration of the 100th anniversary of the beginning of the First World War and the 75th anniversary of the outbreak of the Second World War. 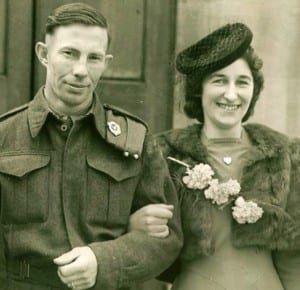 As part of the celebrations, I filmed video of local veterans and their children sharing stories of war and the impact it had on their lives and the lives of their families.

Over the next several weeks we’ll be posting video from the Memories of War series.  In the first video, Helen Jardine shares memories of her father’s sacrifices and how it affected the Campbell family.

Benjamin Campbell was born on October 7, 1913 in Upper Blackville. He joined the North Shore Regiment in June of 1940. Corporal Campbell was involved in the first invasive force that stormed the beaches of Normandy. He was wounded. After recovering, he continued with the regiment through France, Holland and Belgium. He commanded a small group of soldiers who took possession of an island in the River Rhine. This was a decisive victory. He was presented with many medals.

In April, 1942 he married Helen White of Scotland, and returned with her to Canada in 1946. Leaving her family, friends and lifestyle behind, Mrs. Campbell embarked in a new life in rural New Brunswick and became a devoted mother to six children. Watch their story below.