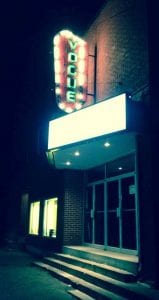 A local landmark will be opening its doors again to the public on December 14th as the Vogue Theatre in Chatham prepares for its first music concert since they renovated. The theatre has undergone significant improvements and will be kicking off with a show featuring Maritime artist Jon Bryant and guest Morgan MacDonald.

The Vogue was built in the 1950s at 50 Cunard Street in Chatham. Despite the update, the theatre still retains much of its classic charm. The Chatham building has been an iconic fixture in Miramichi for many years and this concert is the first in an effort to bring back both new crowds and fond memories.

Both Bryant and MacDonald are musicians hailing from Halifax, Nova Scotia. The show will be held on December 14th at 7 pm. Tickets are available at Seasons View Cafe, Family Convenience, Mac’s Seafood Market and Mirawood Cafe for $10. Organizers of the event urge anyone interested in the show to pick up advance tickets as the show is selling out much more quickly than expected.