Condolence Book for Cst. David Wynn Set Up in Miramichi 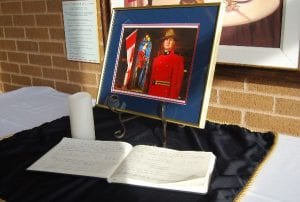 The RCMP in New Brunswick have set up condolence books for the community to sign for Cst. David Wynn from the St. Albert, Alberta detachment who passed away on January 21, 2015.

Originally from Miramichi, Cst. Wynn died at an Edmonton hospital as the result of injuries he sustained after being shot while on duty on January 17th.

The books have been set up to provide people with an opportunity to pay their respects to Cst. Wynn. People are invited to leave messages of condolence, which will then be presented to Cst. Wynn’s family.

A condolence book has been set up at Miramichi Police Force, Miramichi City Hall, 141 Henry Street, in Newcastle and the following locations throughout the province:

The RCMP wish to thank the public for their ongoing support and encourage them to offer their respects by signing the condolence books during regular business hours.

Messages of condolence can also be emailed to the following address:

Flags on all RCMP buildings and establishments across the country will also be flown at half-mast from now until sunset on the day of the funeral.