The magic day on the calendar is close, but Mother Nature has other ideas about when we may get to the river.  All water is safely under ice and snow, and it could be a week or two before anglers can head out at the earliest.

One development this week has finally been the release of regulations regarding salmon and striped bass.  Information from DFO is as follows:
Notice to Recreational Anglers

The new conservation measures in the Atlantic salmon recreational fishery are the following:

The management measures announced today will help with the efforts of achieving conservation objectives for Atlantic salmon in the Gulf Region.

To report any suspicious fishing activity, please contact the nearest Fisheries and Oceans Canada office or to call Crime Stoppers at 1-800-222-8477.

The striped bass regulations are as follows:

MONCTON, New Brunswick – The Honourable Gail Shea, Minister of Fisheries and Oceans, today announced management measures for the striped bass recreational fishery that will take place in 2015 and in 2016 throughout the Southern Gulf of St. Lawrence. This area includes the Maritime Provinces adjacent to the Gulf of St. Lawrence.

Compared to 2014, seven days to the retention fishery and 31 days to the catch and release fishery for both 2015 and 2016 have been added.

These management measures were recommended to the Minister by her Ministerial Advisory Committee on Atlantic Salmon. They are also consistent with the most recent scientific information for this stock, advice from three recreational fishery advisory meetings and online consultations. The two-year plan is in line with the Department’s multi-year planning for fisheries to provide improved stability and predictability for anglers and other stakeholders.

Following each striped bass fishing outing, anglers are encouraged to fill out a survey found here: http://www.glf.dfo-mpo.gc.ca/Gulf/FAM/Recreational-Fisheries/Creel-Census. This will help provide valuable information on angling activities for striped bass.

Management measures for the 2015 and the 2016 recreational striped bass fishery are as follows:

Quotes
“Our Government understands that recreational fisheries are at the core of Atlantic Canada’s economy and culture. We are pleased to increase significantly the retention and the catch and release fishery for the Southern Gulf of St. Lawrence striped bass. We have heard the concerns expressed by stakeholders and remain committed to finding the right balance between increased fishing opportunities, ensuring the sustainability of this species as well as balanced ecosystems.”
The Honourable Gail Shea, Minister of Fisheries and Oceans 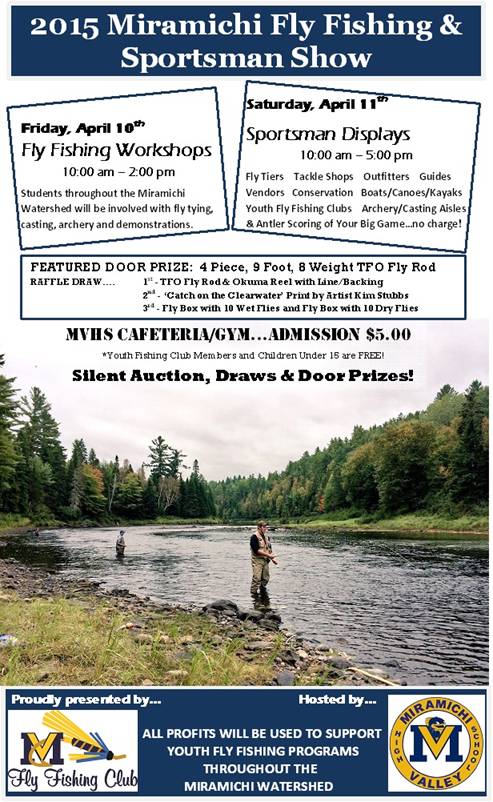 To help anglers get into the angling mode, the Miramichi Valley High School Fly Tying Club will host their Sportsman show this Saturday at the MVHS Cafeteria.  Information about the event is as follows:

The 2015 Miramichi Fly Fishing & Sportsman Show will be on Sarurday, April 11th at Miramichi Valley High School (345 McKenna Ave.).  Key features to the show include:  door prizes (TFO rod top prize), raffle draws (Ducks Unlimited Print, TFO Rod/Reel, MSA Print, Fly Boxes with Flies), silent auction (lots of great items), on site displays (boats/motors/atvs/utvs/mini car racing), canteens run by MVHS groups (BBQ outside main entrance and store between gym offices), local youth fly fishing clubs, MVHS class projects, community fly tiers corner, casting in the gym, archery in the mezzanine and antler scoring in the gym.  It is the first time in Miramichi where the public can bring in their antlers/mounts to get scored and possibly be an official record (be a part of the 5th edition of the NB Big Game Club book).  We are building a huge rack to display all of the submissions to compliment the mounts already on display (#2 moose record and a deer over 100 years old will be part of the show).

All exhibits will be showcased in the cafeteria area along with our silent auction and raffle ticket tables.  We will also have boats/motors/mini racing car on display in the school and some atvs/utvs outside the main entrance.  The cafeteria will have a fly tying corner for both the youth fly fishing clubs as well as community members.  The NB Big Game Club display and booth will be in the gym.  We will also have fly casting aisles in the gym and archery lanes in the mezzanine for everyone to try.  Those who come to the show will be able to travel through the school to access both the cafeteria and gym/mezzanine areas with an admission cost of $5 (kids under 15 and student workshop participants are free).  Entrance for the show will be through the main entrance as well as the entrance with parking in front of the school. 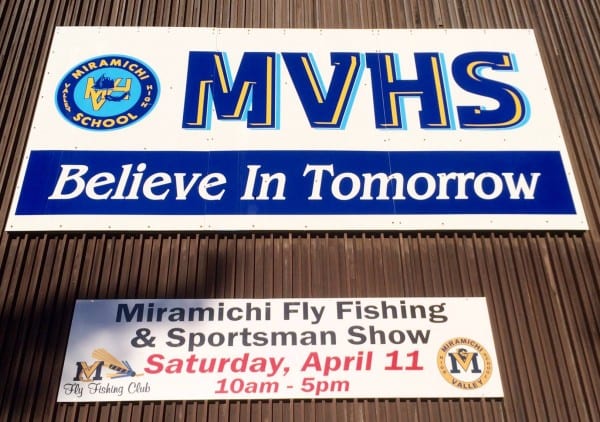