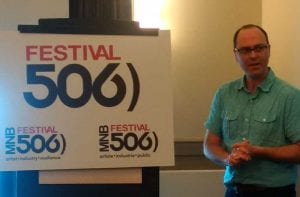 Music NB announced an updated vision regarding it’s annual event. Previously named MNB Festival, the newly rebranded Festival 506 will offer New Brunswick artists the opportunity to be seen, to network and to further develop their career in an event that is now, more than ever, accessible to the public.

Music NB also announced that the city of Miramichi will be hosting the 2016 edition of the event, bringing New Brunswick artists and regional and national industry professionals together, to the delight of the community of Miramichi.

“As a city councillor, any time we can bring a high profile event to our city it is great for business and raises our profile,” said Peggy McLean, City councillor with the City of Miramichi.

“To have this event in my hometown is an amazing opportunity for fellow musicians to play a new market, attract new fans and it is also great for local establishments to see bands and artists and perhaps do business with them,” said Terry Whalen, local Miramichi musician and MNB member.

“Terry came to me with the idea to bid for the event, we ran with it and have been successful. It was a real grassroots effort and this will be good for Miramichi on many levels,” adds Paddy Quinn, Host for the radio program The 506 and co-host of the East Coast Countdown.