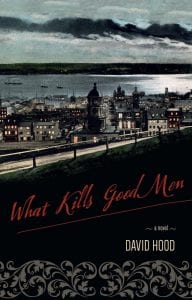 Any work of fiction that begins with a drunken vagrant talking to a bloated one-eyed corpse certainly has my attention, and that is the way What Kills Good Men (Vagrant Press, 2015) begins. It is the Halifax waterfront in the year 1899. The fledgling Dominion of Canada has sent troops to fight for the British Empire in the Boer War. The American Civil war is still fresh in people’s minds. Halifax is a city of contrasts: poverty and subsistence in some areas of the city, wealth and power in others. Both clash in this detective novel by Halifax native, David Hood.

Ellen Reardon (the previously mentioned vagrant) decides that the police – with whom she would normally have nothing to do with – should know about this poor soul before the next tide comes in and washes him away. Chief Inspector Culligan Baxter is assigned the case and once he sees the corpse for himself he immediately recognizes the identity of the man and the need for strict secrecy. He takes a raw recruit (Kenny Squires) into his confidence (and under his wing), not trusting in any of the other policemen’s capacity for discretion. Culligan Baxter is a dour, cheerless man whose strict Catholic upbringing causes him to disdain any straying away from moral issues, although he still treats persons like Ellen with respect, recognizing that they are, despite their failings, human beings. He has no love of power politics or backroom deals. All is seemingly black or white to him. Squires provides a small moderating effect, and in the few days that the story covers (each chapter of the book is one 24 hour day), he quickly matures into a decent detective himself.

What Thrilled, What Kills

I was only a few chapters into the book when I commented to my wife: “you know what kills good men? Books like this!” I was truly ready to give up on the story. It gets off to a very slow start, and reads more like a movie screenplay in that every movement, every gesture is intricately described, bogging down the story in a morass of detail. To be honest, given the setting, I was expecting more of an Arthur Conan Doyle type of writing style. Such is not the case, as the reader will see some F-bombs and descriptions of bodily functions that we could do without, thank you very much. Eventually, as more suspects and clues appear, the story picks up to the point where it actually became one of those novels that you can’t put down. Characters and settings become fleshed out and the story expands to the point where Baxter doesn’t know what to think or do to solve this case. As well, he is dealing with his teenage daughter (and only child) who is more interested in pursuing a career in medicine than having a family just to please her father.

I can envision this novel becoming a series of books with Baxter and Squires investigating crimes in and around Halifax. Baxter has his sights set on becoming Chief of Police one day and this could easily come about if the present Chief runs for Mayor, etc. The author has previously written books on nineteenth century poverty in Halifax, and this is one area in which the book excels: the description of how the poor classes live and exist in late-Victorian Halifax. I would recommend this book to anyone who likes period detective novels with the proviso to stick it out through the first few days/ chapters of the book and they will be rewarded with a good read and a yearning for a sequel. What more could an author want from an ending?

What Kills Good Men will be available in September 2015.