After last year, any positive results are welcome, and that is what we have in a manner of speaking.  There is not a great run on, but there are spurts of fish coming in every day.  Suffice it to say there has certainly been an improvement over this time last year, and let’s hope the trend continues as we move into the month of July.

Doug White’s Tammerack Sports Fly Shop in Juniper said the river is down to summer level and the pools are empty of fish and fishermen. Maybe next week this will change, we will see.

W. W. Doak and Sons in Doaktown said they were hearing very good reports from the Doaktown area.  There were good numbers of fish being seen and caught.  One camp said they had caught more fish this year so far, than all of last year.  There is a good mix of grilse and salmon, with a 20-pounbder reported.  Water conditions were very good. 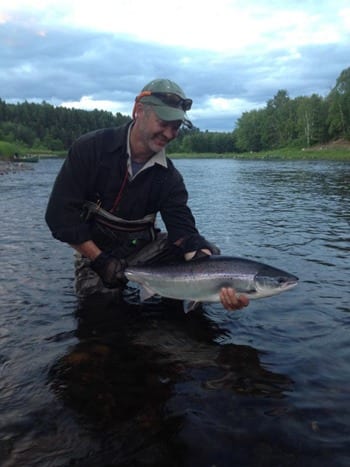 Gavin Higgs with a nice salmon this was the second one of his 3 day trip to Ledges.

Derek Munn of Ledges Inn in Doaktown and Mountain Channel in the Rapids area said there were good numbers of fish around and good spurts moving through.  |Anglers were both seeing and catching fish.  Prior to this week, most had been salmon, but there were also now good numbers of grilse in the mix.  The water conditions were good, perhaps even a tad high on Monday evening.  Mountain Channel was also seeing and catching fish, with two hooked Tuesday morning.  There was also the odd trout reported.

Herb Barry Sr. of Herb’s Fly Shop on the Station Road in Blackville said there were good reports along the river of fish being seen and caught.  There was a good mix of both salmon and grilse.  Over all there seemed to be quite a few fish around.  Water conditions were good in terms of height and temperature.

Curtis Miramichi River Outfitting in Blackville said there were good numbers of fish including good grilse numbers.  Water conditions were good as were canoeing conditions.  There were still a couple of spots available for their Spey Casting School on Saturday July 4.  Cost is $120.00 per participant.  Call 506-843-2481.

George Routledge of George’s Fly Shop at the Mouth of Renous in Quarryville said angling had picked up there with fish moving through.  There were six or seven caught Monday with a good mix of salmon and grilse.  The water was a tad high, but in good shape.  There were some shad in the system as well.

Jim Laws of Miramichi Hunting and Fishing in Newcastle, Miramichi said that the reports were mixed with some anglers catching and others not.  However, numbers of fish were an increase over the previous week.  Water conditions were good.  There were a few trout reports from the Bartibog. 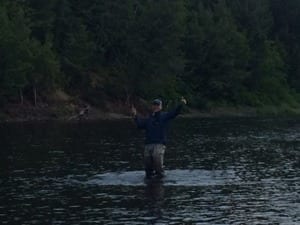 Mike Vorheof is pretty happy into his first salmon. Photo by Derek Munn

Syd Matchett of Trout Brook Fly Shop on the Northwest Miramichi said angling was somewhere between not great and not too bad.  A crew from the Crawford Crown Reserve Stretch caught two salmon and four grilse.  Anglers were picking up fish here and there with about a dozen reported along the system.  Two were caught at Wayerton and another seen jumping.  Water conditions were good, but a bit more rain would help as they did not get the amounts the rest of the province did.  Over all, there were fish in the system and it is better than last year.

Flies of choice were Shady Ladies, White-tailed Green Machines, Bear Hairs and Undertakers on no. 6s and some 8s.

Debbie Norton of Upper Oxbow Outdoor Adventures on the Little Southwest Miramichi said they were fortunate as their sports were seeing and catching fish.  Kris Aldeg of Saskatchewan nabbed a 26-pound salmon and Roger Aldeg a 15-pounder.  Roger Earle of Rhode Island caught a 10-pound salmon and Stephanie Elson a nice grilse.  Water conditions were decent, but more rain would help.

Flies of choice were White-tailed Green Machines and Glitter Bears.

So as the numbers of fish in the system continues to show a gradual improvement week by week, it is time to get out and “on the water”.

Thought for the Week: “Even eminent chartered accountants are known, in their capacity as fishermen, blissfully to ignore differences between seven and ten inches, half a pound and two pounds, three fish and a dozen fish.”  ~William Sherwood Fox, Silken Lines and Silver Hooks, 1954 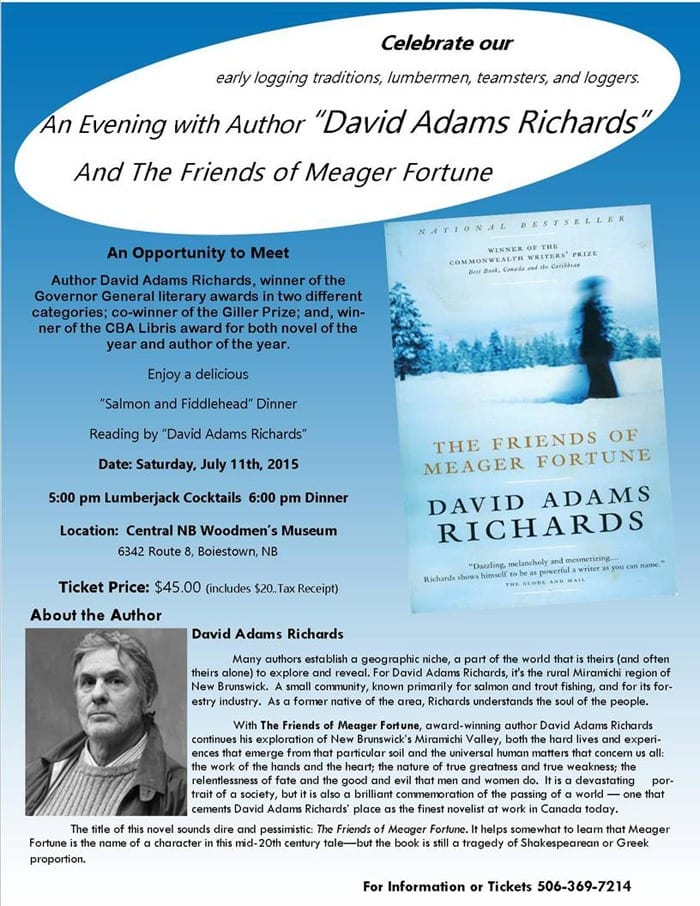 NOTICE
The Regional Director General for the Gulf Region, Department of Fisheries and Oceans, hereby gives notice of the following close times for angling in certain waters of the Miramichi Recreational Fishing Area (Salmon Fishing Area 16) in the Province of New Brunswick.

Please note that the following salmon holding pools will be closed to all angling methods beginning on July 1 until December 31: 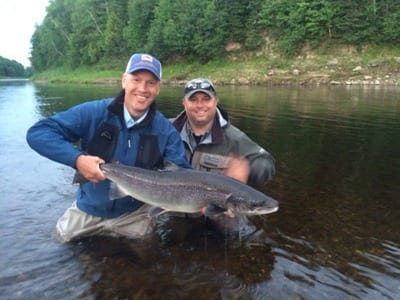 Ledges guest Mike Vorhoef with a 24 lb hookbill. Nice salmon for his first one. Hard to top that one

Refer to Gulf Region Close Time Variation Order 2015-049 issued on June 29, 2015. For further information regarding this Order, please contact your local Fishery Officer.  To receive an electronic copy of all future Variation Orders issued by the Gulf Region, please email and provide your email address to be placed on our Variation Orders distribution list. Notices of all active variation and prohibition orders can be viewed on the Web site of the Department of Fisheries and Oceans, Gulf Region, under Orders Registry, at the following address: http://www.inter.dfo-mpo.gc.ca/Gulf/Orders-Registry

Dear Doug,
I have a couple of suggestions you might want to consider. To support our outfitters I would suggest we might consider a “Twin Salmon ” program. Outfitter could offer their clients a farmed salmon equal in size to their largest caught and released salmon as their trophy to take home. On another front I believe me should ask Green Peace to get evolved in the protection of the Greenland salmon.
Thanks
John Chenier
——————————————— 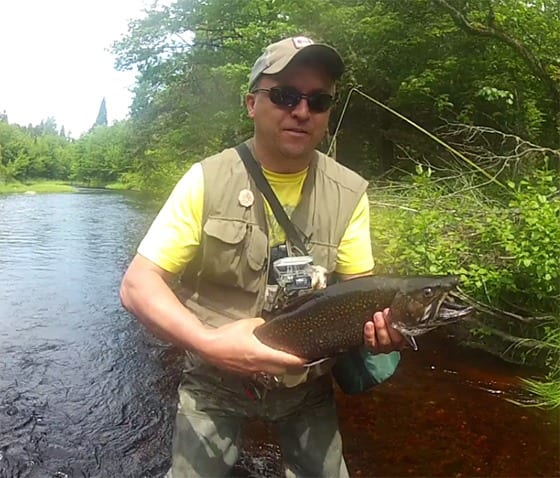 I wanted to drop you a note and share some great success way up the Caines River.

Last weekend a few of my friends made our pilgrimage for out 13th Caines River Fishing trip. We camp out and do a lot of fishing! We are well above the Leased waters so a chance encounter with this Beauty was captured on video.

He was between 5-6 LBs and took a Royal Coachman.

Live release and he swam off to reach the 8LB mark for another day! *The way it should be!