Book Review: Too Much on the Inside by Danila Botha 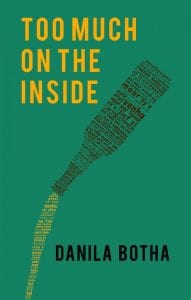 Too Much on the Inside (2015, Quattro Books) is Danila Botha’s first novel. Her previous work was a collection of short stories called Got No Secrets (Tightrope Books, 2010). Presently based in Toronto, she was born in Johannesburg, South Africa and has lived in Israel and Halifax (where she wrote this book).

Set in the Queen Street West (QSW) area of Toronto, Too Much on the Inside primarily concerns four young people; their lives, their loves, their trials and tribulations as they struggle in their search for a raison d’etre in their newly adopted city. Each one also has a difficult (if not impossible to overcome) past to cope with too.

There are no chapters; instead, each character’s name heads a new narrative as if spoken by that person. Gradually, the story unfolds and gets pieced together as the four interact over the course of about one year. The book eventually comes full circle, but that’s all I am going to say. Any more and I would have to post a spoiler warning!

While Too Much on the Inside may not be a book I would have picked up for my own reading pleasure, I found myself being drawn into it for several reasons. Firstly, I lived in Toronto for about 20 years, some of those spent in the Queen Street West area of Parkdale close to where Dez’s bar is located. I recognized the street names and could picture the scenes in my mind’s eye. I also lived near the Bathurst and Lawrence area where the character Nicki stays when she first arrives in Canada. It is a very Jewish neighbourhood where her orthodox cousins live. Thirdly, Ms. Botha’s writing style as well as the book’s unique layout drew me in, which is difficult to describe. Due to the narrative style, I at times felt like a psychiatrist and each of the characters were my patients, each using their scheduled appointment to relate their emotions and deepest thoughts to me. Indeed, many of the narratives conclude with comments like:

“Sometimes he doesn’t get me at all”

“I start to think that I might really be going out of my mind.”

At other times, I felt like a priest hearing a confessional. It is a very engaging writing style, and not one I have come across before. The story of each character unfolds in a sort of backwards/ forwards kind of way. As we learn about their past, the story actually moves forward and we eventually come to understand if not empathize or even sympathize with the character and his/ her problems.

I have also been musing over the book’s title and what it must mean.* Is it that the characters had “too much” inside them; too many emotions, too much past history, too much stress living (in three out the four character’s cases) in a new country, in a large city learning the Canadian way of speaking English, dealing with school, work and relationships?

While reading this book, I couldn’t help thinking of a song by the rock group Chicago: “Something in this City Changes People”:

Having lived in Toronto for so many years, I believe that there is something in the big city that changes people, and that is certainly the case with each of the principle characters here. All of them emerge very changed by the story’s end. They definitely have an altered perspective, a different outlook on life in Canada/ Toronto from what they initially had at the start.

Does the title mean that the reader gets too inside the lives of these people?

Actually, I ended up subconsciously sub-titling this book “The Queen West Soap Opera”. The pace, the stories, the inter-relationships recalled to mind the tried and true soap opera script style of TV. The pace is fairly fast and emotionally charged and then the scene soon changes to another inter-related storyline. But this is not to denigrate the book in any way. As the book nears the end, the stories approach a climax and the book becomes a real page-turner (as if it wasn’t already). You just have to know what is going to happen next to these four people who gradually have become so real.

Again, this is a testament to Ms. Botha’s exemplary writing skills. Since she has actually lived in each of the areas (aside from Brazil) that the characters originate from she brings a very authentic voice to each one of them, male or female. She also liberally peppers the narratives with phrases in the speaker’s native language, making the dialogue very realistic (translations are helpfully provided). As for Lukas, his narratives are in the East Coast speaking style: lots of dropped G’s (askin’), and ‘wanna’ instead of want to, that kind of thing. She also deals with her characters’ sometimes very personal, very delicate past in a profoundly sensitive way, and has not simply inserted such incidents merely for shock value as some writers might.

I think, due to the various backgrounds of the participants, this novel will appeal to a large audience, especially those living (or having lived in) Toronto. It helps to understand the QSW culture, but then again every city has its bohemian, edgy districts that are slowly being gentrified. In fact each character near the beginning of the novel relates how much this particular area of Toronto reminds them of a certain area in their native city or country. If you don’t know Toronto, then simply substitute that certain area in your city for QSW and the story will become that much more real to you.

This is an impressive first novel from this young, energetic author and it is my hope that more titles will be forthcoming from her.

*The Miramichi Reader plans to conduct an interview with the author soon. The meaning of the title will definitely be on the list of questions!