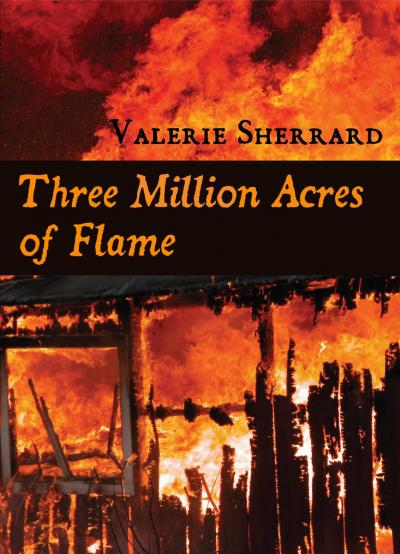 Three Million Acres of Flame (2007, Dundurn Press) is a historical novel by Miramichi author Valerie Sherrard. It tells the story of young Skye Haverill and her family and friends against the backdrop of the Great Miramichi Fire of 1825, one of the largest forest fires ever recorded in North American history.

Fourteen year old Skye Haverill and her family are living near Newcastle, on the north side of the Miramichi River when, on October 7th, a large forest fire advances on the community overtaking homes, livestock and humans as the extremely dry conditions that summer assist in the rapid spread of the fire. The only escape is to the Miramichi River itself, a natural fire barrier protecting Chatham (on the south side of the river) from being devastated as well. The survivors are taken across the river by the kind folks of Chatham who take them into their homes and supply them with clothing and other necessities, since most only escaped with their clothes on their back that day. The story follows the Haverill family and their friends as they are taken in by complete strangers in Chatham, try to rebuild their lives and find love ones that are still missing, and all the while dealing with losses, both material and physical.

An Educational and Enjoyable Read

Recently, in the Western provinces of Canada there have been many wildfires destroying not only forests, but displacing residents and damaging property. The difference between the threat of fire today and back in 1825 is one of communication. Today, fires can be tracked, fought by planes in the sky and trained firefighters on the ground. Back in 1825, the only way to spread news was by word of mouth, or a messenger on horseback travelling from one isolated community to the next over poor roads. There was no telephone, telegraph or radio available to warn others of an impending disaster. Hence, the fire was upon them almost before they realized it. Ms. Sherrard (who is primarily writes Young Adult novels) recreates in words what it must have been like to experience the fear of fire, the flight to the river and the horrible aftermath: the charred ruins of homes, bodies of animals and livestock, and sadly, loved ones and fellow townsfolk:

“Everywhere, hacking coughs and laboured breathing could be heard, together with the sizzling, snapping sounds of the dying fire. Skye choked as she breathed in the soot and acrid odour that was impossible to escape. The overpowering smells of burnt wood and flesh sickened her and, like many others, she found herself retching, although her stomach had nothing to yield.”

While this book may be catalogued as a “young adult” novel, it is mature enough in voice to be enjoyed by an adult reader. Ms. Sherrard’s vivid descriptions of the scenes of the aftermath are just graphic enough (and not merely included for shock value} so that we can understand what it must have been like to be there. However, balanced against the hardships is the seemingly unlimited generosity of the Chatham townspeople who took the survivors in and cared for their needs for as long as necessary until word was spread to other communities and the larger cities of New Brunswick, Nova Scotia and PEI who readily responded to the call for assistance.

Perhaps because of the early time period, there is not a lot of printed material on this event in Canadian history. Ms. Sherrard has performed a great service in writing this book, and she includes a very informative, fact-filled author’s note at the end of the story. Overall, a book with a realistic story (like “Little House on the Prairie” with a little bit of “Anne of Green Gables”) set against a tragic natural disaster in Canada’s past.