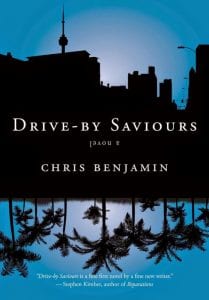 Drive-by Saviours by Chris Benjamin (2010, Roseway Publishing) is the first novel from this Halifax writer. It is a fascinating, complex story involving two men from two different worlds, Mark in Toronto, Canada and Bumi in Makassar, Indonesia. Being an expatriate Torontonian living on the East Coast, I am naturally drawn to any story with Toronto in it. It is a difficult city to describe, but Mark attempts it stating:

That pretty much sums it up. It doesn’t exactly feel right to call such a large city ‘home’ when you can live there all your life and still not really know all parts of it.

Mark is a social worker that has such a knack for all the paperwork involved he rarely sees a client and only then to get the “Coles Notes” version of their problems and to make suggestions like a ‘drive-by saviour’. A turning point for Mark occurs during the Great Toronto Blackout of Thursday August 14, 2003 when 1.5 million commuters were forced to find a way home other than “The Better Way” (Toronto Transit Commission, or TTC). The subways were not able to run, and surface buses were packed to capacity, not even stopping at their regular stops. Mark turns to taking mental images of each of the passengers to pass the time. One of those passengers is someone who will come to influence Mark’s life to a degree he would not think possible at the time. Typically, Mark carries a sketch book and secretly sketches other passengers, but due to the packed conditions, all he can do is sit tight and take eye-blink snapshots until he is pressed into service by calling out street names for the bus riders. Eventually, after about five hours, at 9:30 at night, Mark makes it home to Greektown and his girlfriend Sarah, with whom he lives.

Bumi’s story starts with his birth on the fishing island of Rilaka in Indonesia. At a young age he proves to be quite intelligent and very different from the other children. He is especially adept at working in the market helping his father sell his catch. However, the state takes fifteen of the children off the island and away from their families to attend school, to educate them to be better Indonesians, reminiscent of what the Canadian government did a few decades back with the Residential schools they sent aboriginal children to in order to better integrate them as Canadians. It is here the Bumi’s OCD condition develops and comes to the fore. For instance, now that he knows about germs, he constantly washes his hands. Eventually, as an adult he is misunderstood by an intolerant society and he even comes to believe that he is somehow responsible for the poisoning deaths of three neighbourhood children simply because he works for a company that handles toxins. Incarcerated and tortured, he is at the point of confessing (since they arrested him, he must be guilty, he incorrectly reasons) but passes out. His long-time friend Robadise, who is now a member of the police, takes him home and arranges for him to be smuggled out of the country (at great expense) and get to Canada where they are more tolerant of refugees. There, he is to work in Toronto (illegally) with other illegals in an Idonesian restaurant owned by Chinese brothers who have arranged all the smuggling of these unfortunate people. The hours are long and Bumi calculates it will take years to pay off his Chinese creditors. He longs for his family.

Drive-by Saviours is like two novels in one. Each character’s story could have been told with the other character relegated to a minor role in the narrative. Bumi’s story is told right from the day of his birth but Mark’s story unfolds in a different way; starting in the present day, with occasional flashbacks to fill in the gaps in his life story. Bumi has been in Toronto for some time before he and Mark meet on the TTC in chapter 17, almost at the exact halfway point in the book. Thereafter, they quickly become friends.

Both Mark and Bumi are dealing with a plethora of complex problems that complicate their lives: Obsessive-compulsive Disease (OCD), unfulfilling work/careers, estranged family members, bad memories from the past, physical and psychological torture, even (in Mark’s case) the plight of exploited Mexican migrant farm workers just to name a few. While Bumi struggles in oppressive Indonesia, Mark (who would appear to be living the idyllic life to many, Sarah even works as a catalogue model!) struggles to cope in ways that only someone from the Western world would understand, especially not wanting anything to do with family issues. So while there are obvious dissimilarities in their characters, there are still some common things they share, such as dealing with OCD tendencies and trying to understand them. Mark, seeing Bumi act in ways his sister did, is helped to recognize the disease, then seeks to reach out to his sister living on the west coast. Thus, in a way, Bumi acts as a ‘drive-by saviour’ to Mark, for soon thereafter he is suddenly deported from Canada and pulled out of Mark’s life while he is out west trying to reconcile with his sister Michelle.

There is much, much more to the story than the little bit I have related here, and to tell any more would be to give away too much. I like the way the author has laid out the story line; sometimes shifting each chapter between Toronto and Indonesia, other times he will devote several chapters to one character. At times, I found I couldn’t put the book down until the scene changed or a particular incident was resolved to my satisfaction. I never felt bogged down in the text, or that I couldn’t develop any interest in the characters, which is important for a novel that primarily hinges on just two people. Bumi is very likeable, and Mark and Sarah seem like the ideal next door neighbours, young professional types.

Drive-by Saviours is a broad, encompassing story of two disparate lives from disparate worlds brought together for a brief time. However in their ‘drive-by’ the brief contact changes Mark and Bumi for a lifetime. Recommended read.

Chris Benjamin lives with his wife and little boy in a house owned by two cats in Halifax, Nova Scotia.