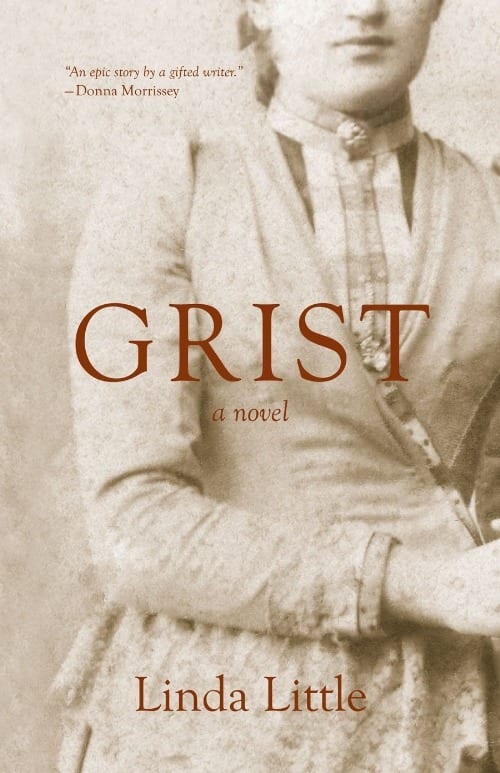 Back in High School English class, we had to read Margaret Laurence’s A Jest of God, which I did enjoy reading, although looking back it might have been too mature a book for teenagers to study in depth. At any rate, any book with a strong and overburdened female living back in the late 1800s/ early 1900s is fated to be compared with her beleaguered Manawaka heroines. So it goes with Grist (2014, Roseway Publishing) by Linda Little which tells the story of Penelope McCabe, a single schoolteacher who marries a miller, only to find out that Ewan MacLaughlin is not the man he appears to be: “I married Ewan MacLaughlin of my own free will … As time would tell, Ewan was not a kind man.”

Penelope, who, at age 30 is happy with her life as a school teacher (“settled in snugly”), is introduced to the miller Ewan MacLaughlin by his younger brother, the Reverend Robert MacLaughlin with whom Penelope is boarding. Shy and awkward, Ewan reminds her of her own father, and soon she finds herself the attention of Ewan’s affections. Ewan tells her: “A woman has her business at home. A woman must have sense.” To which Penelope muses:

“He did not want the young and pretty. He wanted me. What more did I need to know? For all my supposed sensible-headedness, it was this vanity that sealed my fate.”

Ewan has found the strong, stable woman he wants for a wife and they soon wed, the year being 1875. Penelope is enthralled by the home Ewan has built, and by his plans to build a new mill at Gunn Brook. Ewan himself is a self-taught engineer and his mill is designed to be run easily and productively. Ewan is hoping that Penelope produces sons for him to work in the mill and carry on the trade after he is gone. Unfortunately, Penelope remains barren for several years, but finally has a child, a daughter. Due to Ewan’s keen engineering skills, other mill owners around the provinces of Nova Scotia and New Brunswick are soon employing him to improve their operations, which Ewan obliging does, to Penelope’s chagrin. It is due to these extended absences that Penelope out of necessity becomes proficient at operating the mill, although it is no place for a respectable woman in that day and age.

Over the next few years, Penelope sees the death of her first child, several miscarriages and more, causing her to conclude:

“My whole life was the same: untenable, yet unavoidable.”

As mentioned previously, Penelope is a strong female protagonist, along the lines of James Fennimore Cooper’s female characters: educated and strong willed for their time (often stronger emotionally than some of the male characters), but just this side of being considered feminists. Penelope is being gracious when she says of Ewan that he is not a “kind” man (despite his earnest bedtime prayers and overly strict Christian beliefs): he forbids conversation at the table and considers her a “lazy” woman because she does not rise at the first light of dawn as he does. While he is never physically abusive to her, he lacks in any type of demonstrative love, other than what is necessary to produce that vital first son.

In Chapter Five, we discover more of Ewan’s background, and by doing so, we get to understand him more as a man, yet it does not excuse his maltreatment of Penelope over the years. The chapters dealing with Penelope are told in the first person (in actuality to her granddaughter), the chapters about Ewan are in the third person, since Penelope does not really know Ewan’s history until much later in the book.

I really enjoyed reading this book; more than I thought I would in fact. There are several reasons for saying this: first, the historical setting of a small town backwater in Nova Scotia (although it could be set in any place in Canada with a grain mill), secondly for the way the story is told. It jumps right into the brief courtship of Ewan and Penelope, then gets right into the marriage, so we are swept along with Penelope as she experiences all the changes in her life. As well, we get to see Ewan’s side of things, so much so that we do not totally dislike him (as Penelope herself does not) but neither do we side with him 100% as we are compelled to do with Penelope.

The author, Linda Little tells an epic story within 230 pages, and for this she is to be commended. It could easily have encompassed many more pages, but she was able to pare it down to a swift-moving yet engrossing read that tells a complete story without getting wallowed down in details. I especially appreciated the detailed explanations about the parts of a mill and the requirements to have them all work in harmony; it makes one appreciate the genius of Ewan MacLaughlin all the more so. I looked up the term “grist’ in Wikipedia and this was part of the explanation: “A miller ground whatever grain was brought to him, and charged a portion of the final product for the service.” All of the main characters in Grist pay a heavy portion of their lives to exist and remain strong despite what life has ground out for them. Grist is a great Canadian novel, and one not to be overlooked nor quickly forgotten.