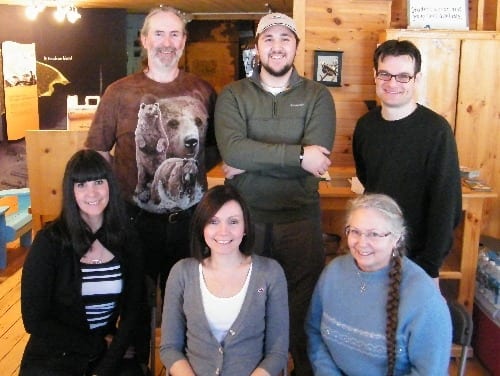 The Friends of Beaubears Island are excited to announce the next event commemorating the 150th anniversary of the end of shipbuilding on the Island, a theatrical production, The Tide Recedes.

A century and a half ago, the Goldfish and La Plata sailed from Beaubears Island, marking the end of nearly a century of shipbuilding, and inaugurating an era of quiet repose in a place that once housed one of the largest business operations in the province.

Now, from April 15-17, at the Vogue Theatre, tribute will be paid to the man, and the family, who saw the final days of this proud industry on the Island, closing it with a flourish.

The three-act play will focus on John Harley (played by Brandon Manuel), Beaubears Island’s final shipbuilder, and one of Miramichi’s finest craftsmen in the mid-19th Century.

Harley, who arrived in Miramichi from Ireland in 1823, built more than 60 ships on the river, all of exceeding quality. Along the way, audiences will see him gain mastery of his craft, while under the tutelage of industry giant William Abrams (played by Neil Wallace). In time, watch as he forms ties of friendship with fellow Irish entrepreneur George Burchill (played by Greg Donovan), before eventually forming a partnership with him, and putting that friendship to the test.

The play discusses a myriad of topics, from themes of Irish identity in British North America, and the Irish Famine, to the burgeoning sawmill industry and end of shipbuilding. Above all, the play is the story of a family, growing, changing, and struggling to keep up with a world that sometimes transforms a little too fast.

Ticket holders will see the blossoming romance between John, and Ann Coughlin (played by Lisa Savage), and watch his children, Susan and Willie (Kenzie Norton and Kirby Dawson respectively) grapple with difficult decisions in the wake of a terrible error in judgement.

Throughout it all, whether in laughter or quiet reflection, the Harleys grow stronger for the many tests they endure; certainly a theme as salient today as it was in the 1800s.

Chris Matheson, known for his directorial successes in guiding the Miramichi Valley Drama Club, chairing the Beaubears Island Programming Committee, and coordinating the Dare the Dark Headless Nun Tour, has agreed to direct the performance. Matheson will be pulling double duty as the Drama Club will stage Once in a Lifetime at MVHS from March 30th to April 3rd, but such is his commitment to history and the arts.

As an added attraction, all ticket holders attending the shows will be entered to win a Rodd Hotel & Resorts Getaway for two (valued at $425), courtesy of Rodd Miramichi; the draw to take place at Intermission on April 17th.

Finally, adding to this already worthwhile production, it is staged as a fundraiser for the Friends of Beaubears Island’s Summer Student Program, providing longer summer employment to qualified students interested in our rich culture and storied history on the Miramichi. Tickets ($10) are available at Scott’s Pharmasave, Brookdale Flower Shop, Beaubear Co-op Gas Bar, and by calling 622-8526.