Summer is officially here and so are the fish. There has been a steady increase in the number of salmon and grilse entering the system, but there is no great run yet. But for the time of year, things are unfolding as they should.

Doug White’s Tammerack Sports Fly Shop in Juniper said back again, better late than never….maybe. The river is at a perfect pitch, cool and as clear as the water gets up here. There is a fair run of sea-trout in both branches, but I believe the early high water sent the majority of the big ones on ahead as most catches now are in the 2 to 3 pound size. The largest I saw was 5 1/2 pound. There have been several large salmon hooked but again very few people are fishing.

W. W. Doak and Sons in Doaktown said this week was better than last, with more rods in the river. They had reports of salmon in the 12-15 pound range being hooked from Blackville to Doaktown. There were even a few grilse being hooked. Salmon were also reported on the Dungarvon and the Northwest Miramichi. However, the fish were barreling right through, rather than stopping in holding pools. Water conditions were almost perfect, but perhaps a tad high in Blackville.

Flies of choice were mostly wets such as Same-Thing-Murrays, Green Machines, Butterflies and Undertakers.

Derek Munn of Ledges Inn in Doaktown and Mountain Channel in the Rapids area said there were some bright fish scattered around, but most were salmon. Most were at least seeing fish, and the numbers were generally good for the time of year. Munn hooked a 20-pounder and two more almost that size on Sunday. They were also seeing fish at Mountain Channel. Water conditions were perfect. 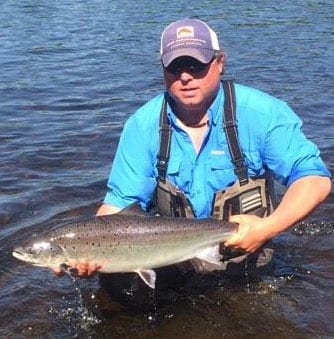 Herb Barry Sr. of Herb’s Fly Shop on the Station Road in Blackville said there were a few bright fish going through and they were seeing some. One trout angler was fishing a Rat-faced McDougall and was surprised to hook into a 10-pound salmon. The water was a little high, but fishable.

Curtis Miramichi River Outfitting in Blackville said anglers were hooking both some salmon and grilse. They had heard good reports of trout on the Renous on the weekend. The water was up a little, but not too high. They expected angling to improve this coming week.

Jim Laws of Miramichi Hunting and Fishing in Newcastle, Miramichi reported slow angling with the striped bass winding down, and a few salmon and an odd grilse being reported on all rivers. Water height and temperature were good.

Flies of choice were Green Machines, Black Ghosts and Butterflies.

Syd Matchett of Trout Brook Fly Shop on the Northwest Miramichi said angling was good mid last week from Tuesday to Friday, but the weekend was quieter. Norm Rogers hooked two salmon, and one pool reported nine grilse in an hour as a small spurt went through. Some camps were also reporting decent fishing. The water conditions were very good, maybe even a tad high.

Debbie Norton of Upper Oxbow Outdoor Adventures on the Little Southwest Miramichi said the striped bass were still spawning below Red Bank. There were some salmon and grilse being caught, with numbers in favour of the grilse. Over all, it was steady for the time of year. Paul Elson and Howie Gould hooked three between them on the Northwest last week. Water conditions were excellent.

Connie Browne who is over-seeing the Wood Turtle study at Upper Oxbow said results so far are showing a healthy population.

So as the levels continue to drop, it is time to get out and “on the water”. 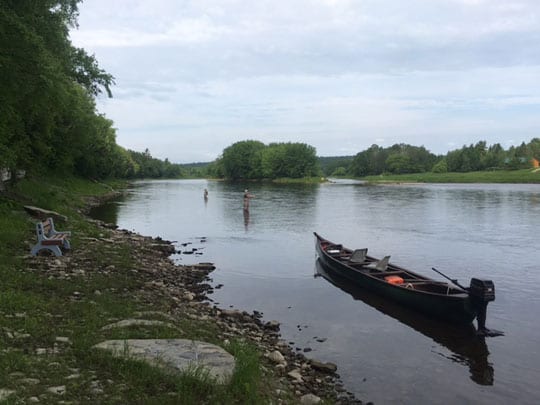 Deals 4 U and MacCallum Building Supplies.

Thought for the Week: “If you’ve got short, stubby fingers and wear reading glasses, any relaxation you would normally derive from fly fishing is completely eliminated when you try to tie on a fly.” ~Jack Ohman, Fear of Fly Fishing, 1988