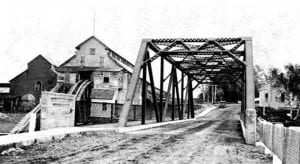 Blackville was long settled before it received its name. It was believed to be settled right after Northumberland County was established and at the same time New Brunswick was separated from Nova Scotia in 1784. Many Loyalists, dissatisfied with their land grants, moved from the Saint John and Nashwaak Rivers in 1785-1787.

The first to come was Alexander Underwood, a sea captain of Yorkshire, England who took part in the Revolutionary War. After the war was over, Captain Underwood was trekking his way through the wilds of New Brunswick by way of the Miramichi with every intention of returning to his native land, when by chance he met a fair lady, by the name of Nancy McGraw, fell in love, married and settled in Blackville.

The first doctor in Blackville was an English Army doctor by the name of William Idear. In the late 1700’s, he was given a grant of 125 acres for his services rendered in the British army. The doctor settled on a small island which is now known as “Doctor’s Island”. Dr. Idear made his own medicines from the many wild herbs that he grew on the island. In the mid to late 1900’s a botanist visited the island and found at least 170 different kinds of herbs growing there. 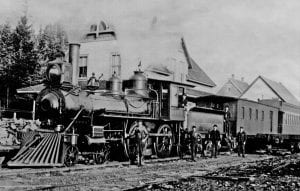 Blackville’s main industry for over 150 years was lumbering. Two Scotsman, Doak and Alexander MacLaggan arrived in Blackville and built a sawmill in 1820. It was located on the north side of the Bartholomew River, now the site of the Blackville Municipal Park. In the 1840’s, across from the sawmill on the opposite side of the river, a water driven Grist Mill opened and was operated by an Englishman named Henry Steele. Farmers would plant their own wheat and have it ground into flour at the mill. The Grist Mill closed in 1902. One of the mill’s original grinding stones currently resides in the Blackville Park.

In 1893, Alexander Gibson took over the sawmill and also built a Steam Mill. Archibald Alcorn, Sr., was the Gibson Mill’s first engineer. In 1915, Gibson sold out to the Nashwaak Pulp & Paper Company Ltd., and the mill operated until 1931 when it was destroyed by fire. A few years later, the mill site was leased to Bamford brothers from Doaktown who built and operated a mill for several years. Miramichi Forest Products Ltd. acquired the site in 1958. In 1973, the mill burned down and a new one was built in the upper part of Blackville. It was completed in 1975 and employed 150 people at the mill and another 200 people in the woods. Poor lumber markets caused a shutdown in February of 1977. The mill later reopened as Blackville Lumber and operated until 2007.

The Parish of Blackville was established in 1830 and was named after the Honourable William Black, administrator for the Government of New Brunswick. Colonel Black was commander-in-chief of New Brunswick from 1829-1831. 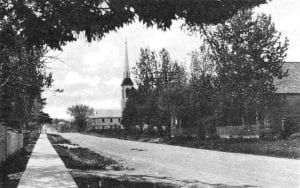 In 1866, Blackville was a lumbering and farming settlement with about 20 families. In 1871 it had a population of 450. By 1898, Blackville was a station on the Canada Eastern Railway and a junction of the Intercolonial Railway with one post office, five stores, two hotels, two sawmills, one woodworking factory, two churches and a population of 600, and included the settlements of Underhill, Breadalbane and The Forks.

On September 15, 1936, the Blackville Credit Union received its charter and became the first organization of its kind in New Brunswick under the direction of Father AA McKinnon. It officially opened for business on September 30, 1936. Blackville was incorporated as a village in 1966, annexing the neighbouring communities of Underhill and Breadalbane in the process.

In November, 2016, the village of Blackville will have been incorporated for 50 years. To commemorate this special milestone, there will be a celebration on Saturday, September 3rd. Details will be posted on www.villageofblackville.com when they become available.

To learn more about the history of Blackville and to view more photos, please visit www.memoriesofblackville.com.

Les McLaughlin has been a website developer with MCG Media since 2003 and a long-time community ambassador of the village of Blackville.