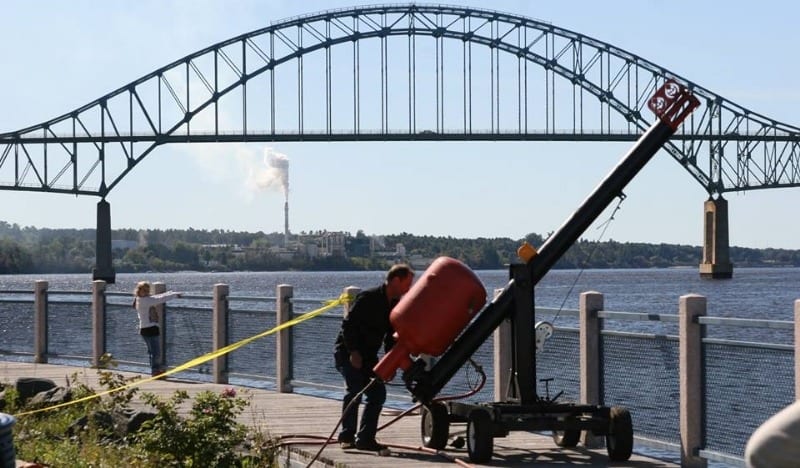 Elementary, middle and high school students from the Anglophone/ Francophone North School District will compete in a pumpkin flinging contest. The public is welcome to cheer on the participants and observe the pumpkin flinging flying fun. 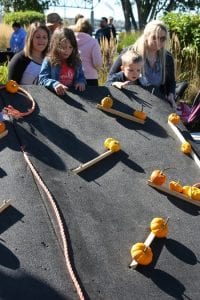 The annual Fall Harvest featuring the Pumpkin Fling is hosted by the Association of Professional Engineers and Geoscientists of New Brunswick (APEGNB) in partnership with Sunny Corner Enterprises and NBCC Miramichi. This event allows APEGNB to promote engineering in a fun and creative way.

Students purchase pumpkins with specific numbers that identify the participant. When the time comes they approach the firing station and trigger an air release valve that fires the cannon and launches the pumpkin into the air. Students are asked to provide aiming directions during this time so they have an interactive input to the trajectory of their pumpkin. A floating target serves as the intended splash point and is located about 500 feet from the shore.

For the past 13 years the APEGNB Pumpkin Fling has been a fun educational event for students. Prizes are awarded for the shot closest to the target and to second and third runners up, as well as a trophy for the “worst shot”. The winning school will be the recipient of the Fancy Pumpkin Fling Trophy. This year schools will also be launching their own Mini-trebuchet Fling with prizes of $1000, $500 and $250. 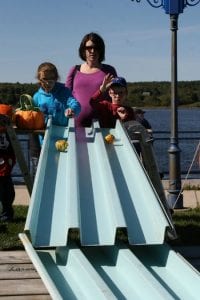 This event has expanded to include other activities such as Pumpkin Plinko, pumpkin face painting, pony rides and the Rotary Club’s Chili Cook-Off. The cost is $10 per blast and $5 for all other events. Money raised during the event is donated to the STEMnorth science labs winners in area schools.

About the Pumpkin Fling
The Pumpkin Fling started out using a steel framed Trebuchet with about 350 pounds of counter-weight and with an out-stretched sling height from the ground of 27 feet. Due to the unpredictability of the firing of the 10 pound pumpkins out of this contraption, they opted to use instead compressed air powered cannons with a 6-3/8” bore and 4” Bore. These have proven to be much safer.

The large and small Air Cannons have evolved over time. The Big Air cannon now sits atop a purpose-built steel-framed wagon, and its seven foot long barrel is mounted to the turret off a boom truck, to allow for easy horizontal positioning. A Steel Wire Cable winch has been configured to aim the barrel up-and-down for height, and breach loading capability has been added. The smaller (Onion Cannon) has been re-purposed to launch candy and swag over the heads of the Audience.

It is almost impossible to hit the floating target moored about 500 feet off shore with any accuracy. The target is frequently over-shot and the instability of the air-borne 4 pound Pie-Pumpkins and the wind currents keep the pumpkins spiralling in all directions. It is great fun!

In 2003, the APEGNB Pumpkin Fling was created by Kevin Gallant, PEng, to replace Miramichi’s fall festival in September. It “catapulted” APEGNB’s Northeastern Branch into the public consciousness as a community supporter and school breakfast fundraiser. Using a trebuchet to “fling” pumpkins toward a target in the Miramichi River, the event also allowed the Branch to promote engineering in a fun and creative way.

Over its 13-year history, the event expanded to include other pumpkin-themed activities like Pumpkin Plinko, pumpkin face painting, pony rides and the Rotary Club’s Chili Cook-Off. Money raised during the event was donated to the Kids Breakfast Program in Miramichi area schools. 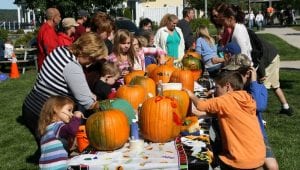 On February 2, 2015, Ray Ritchie, APEGNB Northeast Branch Chair, met with representatives of the Anglophone North School District: Joan MacMillan, Director of Curriculum & Instruction, and Jamie O’Toole, subject area co-ordinator for technology and skilled trades). They were eager to partner with the Northeastern Branch in STEM-based Pumpkin Fling activities for elementary, middle and high school students. Proceeds of the event would now be focused on the Schools’ STEM Education funding.

Since then, an effective collaboration has blossomed between the APEGNB Northeast Branch and the Anglophone North School District. In particular, NBCC Professor, Kevin Gallant, P.Eng., has devoted significant extra-curricular time toward STEM related education and technology exposure events for local area students. His efforts have motivated others to invest in these technical education events, and as a result, the momentum for STEM based training is accelerating at an ever-increasing rate in the Miramichi and surrounding regions. The students get it!