As we end September and begin October, we move into the “Cast ‘n Blast” season.  Already some anglers have combined fishing with the hunting of Woodcock, but Saturday signals the opening of grouse and duck season.

Generally, there has not been a Fall run yet, but in the last week or so, there have been slight increases in the number of fish coming in, and they are fresh fish with sea lice.

One camp along the river reported the third best year since the 1980s. 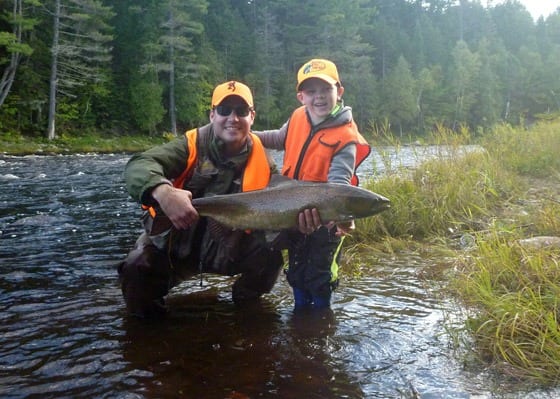 W. W. Doak and Sons in Doaktown said anglers are picking up fish here and there.  Some camps are limiting out while other may draw a blank.  There are decent numbers of fish in the system, but they are not taking well.  The water levels are good, but above Doaktown and on most tributaries, the levels are low and would welcome a boost.  Water temps are good.  There seems to be a good mix of salmon and grilse.  This past week saw some nice salmon caught in the 18-20 pound range.

Flies of choice were Cascades, General Practitioners, Ally’s Shrimps, Copper Killers along with the traditional darker flies such as Undertakers, Same-Thing-Murrays, and White-tailed Green Machines.

Derek Munn of Ledges Inn in Doaktown and Mountain Channel in the Rapids area said they were catching a few some days, while other days nothing.  The water was a decent level and temperature.  Generally, they were seeing more salmon than grilse.

Flies of choice were Stone Flies, Undertakers, Smurfs, Marabous such as Green Slimes, and a few Fall patterns.

Herb Barry Sr. of Herb’s Fly Shop on the Station Road in Blackville said there seemed to be a lot of fish around, but they were not taking well.  But anglers were catching some.  Guy Sorel caught a nice grilse on the Cains River.  Generally, water conditions were decent.

Curtis Miramichi River Outfitting in Blackville said anglers were seeing lots of fish, but they seemed to have lock-jaw.  However, catching was picking up some on Tuesday.  There was a decent mix of salmon and grilse.  Water conditions were good.

Jim Laws of Miramichi Hunting and Fishing in Newcastle, Miramichi reported some fish around, but they were not taking well.  Water conditions were good, but a good rain would help.  Anglers seemed to be putting aside Bombers and Dry Flies.

Laws said as far as the striped bass were concerned, they were still down river, with only an odd one being caught in Miramichi proper.  Takers seemed to prefer bait to lures.  Traditionally, the later we get into October, the better the bass fishing is.

Syd Matchett of Trout Brook Fly Shop on the Northwest Miramichi said angling was quiet with very few anglers out.  The water was low, but a good temperature.

Flies of choice were shady Ladies, Orange-winged Butterflies, Ally’s Shrimps, both red and orange-butt Bear Hairs on smaller hooks such as nos. 8 & 10s.

Flies of choice were Copper Killers and Blue Smurfs.

The Miramichi Salmon Association was still collecting brood stock, and has plans to remove beaver dams later in the fall so salmon can get further up their home streams.

So as we wait for the heavy Fall run, we can take some satisfaction in slight increases of fresh fish, do some casting and blasting as well as take in the beginning of our Fall colours as we get out and “on the water”.

Thought for the Week: “If you fish the wrong fly long enough and hard enough, it will sooner or later become the right fly.” … John Gierach