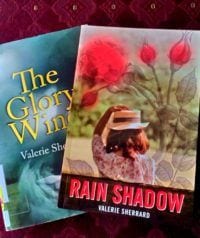 Miramichi’s resident Young Adult (YA) author Valerie Sherrard has had many of her books shortlisted and awarded in various categories, and these two novels are no exception. The Glory Wind (2010, Fitzhenry & Whiteside) aside from being on several shortlists, was the winner of the 2011 Geoffrey Bilson Historical Fiction for Young People Award as well as Winner of the 2011 Ann Connor Brimer Award.

Rain Shadow (2014, Fitzhenry and Whiteside) is, at this writing, on no less than four shortlists: three for 2016 and one from 2015. You know you are in for some good reading with Ms. Sherrard’s books! I am reviewing these books together since they both take place in the fictional town of Junction, Manitoba in the mid 1940s, and Rain Shadow compliments some of the story lines in The Glory Wind, so for the most emotional impact, The Glory Wind should be read first, but this is by no means a requirement.

The town of Junction, Manitoba in the post WWII years is not a very exciting place to live for young Luke Haliwell. That is, until he happens upon the spunky, curly-haired Gracie playing in his field. Her and her mother Raeline had just moved in to the old Sharpe place. They soon become fast summer friends and the friendship continues on into school, where Gracie is instantly popular with the other girls. Then, a confluence of circumstances serve to bring Gracie’s and her mother’s world crashing down. Now, Luke is conflicted as to do what he knows is right, yet stay loyal to his friendship with Gracie and his budding love for her.

“I am sometimes drawn to open-ended stories because they are closer to real life than those which wrap things up tidily at the end. I find the characters and themes remain with you from stories that leave you with unanswered questions. I know that is not a popular approach for some readers, but I have to be true to the voice of each story.”

Told through the voice of Luke, we get a mature young person’s view of his family, his friends, his new emotions for Gracie and dealing with controversy. There are underlying themes of acceptance and tolerance, social stigmas, plus some great characters, such as Carmella Tait who serve as an emotional anchor, or touchstone for Luke and Gracie. While some may see the ending as a little disappointing (I know I did), but the more I thought about it, the more I was able to see the message behind it. It certainly left in me a need for closure (see “A Few Words From the Author” below), and I found it in Rain Shadow. So there is another good reason for reading both books together!

Junction, Manitoba a couple of years after the events of The Glory Wind is not much of a changed place. It is the late 1940’s and we see the world through a very different set of eyes: that of Bethany Anderson, a physically and mentally challenged twelve-year-old girl. Her perspective is special and Ms. Sherrard excels at relating Bethany’s perception or interpretation of things that she hears adults, particularly her mother, say: “Sometimes a small thing I did wrong was the last straw. (That is not a straw for drinking. It is a kind of straw that gets put on a camels when children disobey.)”

Bethany’s mother is not that tolerant of her limitations, and is proudest of her other daughter Mira who is fourteen and very popular at school. Bethany’s father is the stable, grounded adult in this story (and Carmella Tait and Luke Haliwell are back as well) and always builds Bethany up, telling her that she can become whatever she wants. “Bethany, I think you might surprise a few folks someday” he prophetically tells her.

Tragedy visits Junction in the form of the dreadful disease of Polio (the vaccine not having been discovered yet). This leads to various conflicts, for both the afflicted and their caregivers and survivors. Several times I was moved to tears, both happy and sad, as Bethany relates her ever-changing world to us, and grows ever stronger herself with proper support and encouragement.

A Few Words From the Author 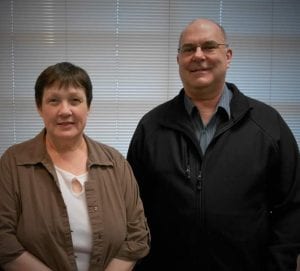 With the author, Miramichi 2016

I asked Ms. Sherrard if, after writing The Glory Wind, she felt a need to revisit Junction Manitoba. I professed to her that I felt the need (via the character Luke) for some type of closure. She kindly took some time out of her busy schedule to respond:

The Glory Wind  is the kind of story where there really can never be closure, at least not with respect to what happened to Gracie. It is not uncommon for situations and circumstances to occur where we never have an answer or real understanding of what exactly happened, or why. In that sense, there is nothing in Rain Shadow that offers clarity – although revisiting some of the characters from The Glory Wind in the companion story (not a sequel) may be of some value to readers who know the characters in both stories.

I am sometimes drawn to open-ended stories because they are closer to real life than those which wrap things up tidily at the end. I find the characters and themes remain with you from stories that leave you with unanswered questions. I know that is not a popular approach for some readers, but I have to be true to the voice of each story.

It had never been my intention to write a second story set in Junction and I was actually quite surprised when Bethany’s character began to take form and I realized I had more to tell about the residents of this fictional location.

Of the 25 books I have had published thus far, I have felt the closest connections with the characters and events in these two novels.

I find Valerie Sherrard’s books are written just as much for adults as for mature young readers (male or female). The stories are engrossing and well-conceived. There is also a certain wholesomeness to them that makes them all that more enjoyable and satisfying to read. More importantly, her books contain important life lessons, which, sadly, a lot of adult fiction lacks. I highly recommend reading both books; I am sure you or your YA reader will not be disappointed.