As we near the end of the salmon season, it is time to get out and enjoy the Canadian Thanksgiving weekend. The weather is beautiful, the Fall foliage is hitting stride, there is time for “Blast ‘n Cast” and there are reasonably good numbers of fish around, although they are not taking well. The stripped bass are also returning in good numbers. 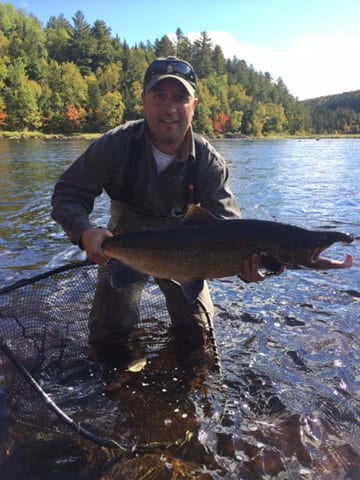 W. W. Doak and Sons in Doaktown said the water levels were low, especially on the tributaries, but a good temperature.  Some lodges were having decent fishing with some fresh fish being caught.  There was a 44-inch salmon (low 30 pounds) caught this past week and a good number in the 20 pound plus range.  Over all, it was decent fishing.

Flies of choice were Marabous and Fall patterns.

Herb Barry Sr. of Herb’s Fly Shop on the Station Road in Blackville said there were fish around and anglers were catching some.  He’d heard that fish were seen jumping in the Douglastown area of Miramichi City, so there must be new fish on the way in.  The water was low, but the temperature was good.  Anglers were seeing some big salmon.  One angler reported catching a striped Bass on the Cains River.

Curtis Miramichi River Outfitting in Blackville said there were lots of fish around, but not always taking as well as anglers might like.  There were a good mix of salmon and grilse, with a lot of big salmon.  Some of the fish caught were fresh fish.  The water was low, but a good temperature.

Jim Laws of Miramichi Hunting and Fishing in Newcastle, Miramichi reported that good numbers of fish were being seen, but they were not taking well.  The water was low, but cool.

There were more striped bass in now and some were being caught.  Most of the catching was on bait, but some were taking lures.  Remember the season is open until October 30.

Flies of choice were Same-Thing Murrays, Shady Ladies, Undertakers and a variety of Fall patterns.

Syd Matchett of Trout Brook Fly Shop on the Northwest Miramichi said he had heard reports of good fishing.  One angler hooked four on Thursday, three on Friday and two on Saturday.  Paul Elson, Howie Gould and a couple of friends caught six on Friday and four on Saturday.  The water was quite low, but a good temp.

Debbie Norton of Upper Oxbow Outdoor Adventures on the Little Southwest Miramichi said angling was good.  They had hooked about20 fish with some taking short, while others were lost near landing.  They did land 7 or 8 fish, with some being fresh.  Jim Hoyson caught a nice grilse and lost a salmon, and Roger Earle of Rhode Island caught a salmon and a grilse.

Flies of choice were Copper Killers, Blackmores, and Flannies.

So with the beautiful Fall colours in full swing, some fresh coming in and fish generally around, it is time to get out and “on the water”.

CONDOLENCES:  This past week the Miramichi lost one of its long-time anglers and a well known and respected Fly Tyer in the person of Frankie Somers. Frankie was a great supporter of the annual Miramichi Valley Fly Fishing Club and donated many framed flies for their auctions.  Frankie will be missed by all who knew. Cast a good line up there my Friend!

Thought for the Week: “The best fishermen I know try not to make the same mistakes over and over again: instead they strive to make new and interesting mistakes and to remember what they learned from them.” … John Gierach