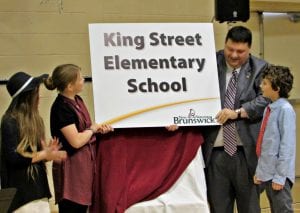 The Honourable Bill Fraser with students. (Photo by Anthony McLean)

Yesterday morning, Monday February 20th, 2017, at 10 am a Naming Ceremony for the new Miramichi East school was held at Saint Andrew’s Elementary School in Chatham.

The Sistema Beethoven Orchestra began in 2016 with 30 students. This year 48 students participate in the program from Saint Andrew’s Elementary School, Napan Elementary School and Ian Baillie Primary School. The Sistema New Brunswick Miramichi Centre operates in partnership with the Anglophone North School District, the City of Miramichi, the Miramichi Boys and Girls Club, the Highland Society of New Brunswick in Miramichi, and the Kinsmen Club of Miramichi. Instruction is offered in English.

Following the singing of the national anthem, Ms. Bowes along with a student, Aidan Donald introduced the Honourable Mr. Bill Fraser, Minister of Transportation and Infrastructure for the Province of New Brunswick and Liberal MLA for Miramichi – Bay du Vin.

Mr. Fraser gave a warm welcome to all who were in attendance. It was at this time, Mr. Fraser made the announcement of the name for the new school – “King Street Elementary School”.

The $18 million school being constructed in Chatham will open its doors in September 2017 and will accommodate 400 students replacing Ian Baillie Primary School, which was built in 1959, and Saint Andrew’s Elementary School, built in 1963.

“I am pleased to be able to unveil the name of this new school in Miramichi,” Mr. Fraser said. “The community is happy to have this important infrastructure to accommodate the needs of current and future students.”

At the end of the ceremony, Ms. Bowes thanked everyone who attended, and the Sistema Beethoven Orchestra and Saint Andrew’s Elementary School Choir performed Home to conclude the ceremony.

Click to enlarge any of the photos below. To view more photos visit the Mighty Miramichi Photo Gallery. 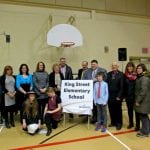 All photos by Anthony McLean.