As of Thursday, July 20, 26 cold water pools will be closed to fishing on the Miramichi River system. A variation order was just issued yesterday to this effect (download 2017 Salmon Pool closures pdf), and a notice to anglers was published on the regional DFO Internet at http://www.inter.dfo-mpo.gc.ca/Gulf/FAM/Recreational-Fisheries (under the ‘salmon’ headline). These closures are triggered under the warm water protocol in place on this system, as in date of this Wednesday, it is already been three consecutive nights that the water temperature in the Main Southwest Miramichi stayed above 20°C, and aggregations of salmon in cold water pools were observed by our staff on the field.

Please note that one additional pool was included to the list of 25 pools closed under such circumstances, following the completion of cold water habitat improvement at this location: 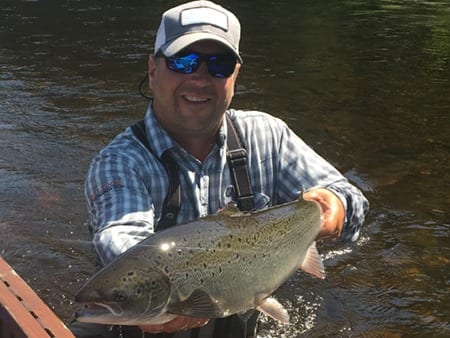 MIRAMICHI – This week’s report is much the same as the last several weeks. There still has been no big run of salmon or grilse, but there are spurts going through every day. An angler may go out to a pool and see nothing, while the person fishing in the next pool up-river has good fishing as the small spurt has gone by the first as they are not holding.

The exception this week is that fish may be holding in cold water pools or at the mouths of brooks due to low and warm water.

W. W. Doak and Sons in Doaktown said there were some fish around, and last weekend produced some encouraging fishing with some camps doing well. There was a 30-pound salmon landed, one camp had 15 grilse and two salmon, and in the Doaktown area, coldwater pools were doing well. Angling quieted down on Tuesday with the onset of very warm weather. There are still small numbers of fish going through, but angling is hit or miss. Over all, it hasn’t been a great year thus far, but interesting enough to get anglers off the couch and onto the river.

Water levels are low, but not in panic mode, but fishing is getting tougher as temperatures climb. If anglers had a wish-list, two things on it would be cooler nights and a good rain.

Andrew Anthony of Ledges Inn in Doaktown and Mountain Channel in the Rapids area said angling was good last week, and they had hooked a couple on Tuesday of this week. Mountain Channel had three on Monday and had been getting and seeing a few every day. There had been a couple of salmon in the group, but the rest were grilse.

The water was getting low and warm, but was adequate.

Flies of choice were a variety of Bombers (blue and brown & green), along with small wets such as Undertakers, Cossebooms, Bonnie Bells, Flame Throwers, Christmas Trees and a Preacher-like fly, all on no. 12 hooks.

Herb Barry Sr. of Herb’s Fly Shop on the Station Road in Blackville said anglers were getting a few fish, but in no great amounts. There were not many anglers actually out, as the locals are not fishing. One angler and his son, both first-timers for salmon angling, did have luck with a grilse each. Water was low and warm.

Curtis Miramichi River Outfitting in Blackville said anglers were getting some fish, but not a lot. There was a mix of salmon and grilse. The water was getting low and warm, particularly late in the day.

Jim Laws of Miramichi Hunting and Fishing in Newcastle, Miramichi reported salmon angling as still slow with only a few being caught. Striped bass were making their way well up the various river which was concerning. Water was getting low and warm, with a good day’s rain needed.

Syd Matchett of Trout Brook Fly Shop on the Northwest Miramichi said angling was generally a bit slow. One Crown Reserve party fished the Narrows and saw nothing, while the next crew after caught 18 as there had been a five-inch raise in water. A party at the Depot Stretch who came out Tuesday had hooked four and saw a few more. There was nothing much to report locally. The water was warm and low.

Flies of choice were small with silver bodies and dark patterns such as Shady Ladies, Bear Hairs and an all black Bear Hair once tied by the late George Routledge (Syd has some) on nos. 6 & 8 hooks.

With the warm spell we are having, it is best to get out very early before temperatures sky-rocket. Pray for rain and cooler nights so we can be more productive “on the water”.

Thought for the Week: “Most fishermen swiftly learn that it is a pretty good rule never to show a favourite fishing spot to anyone you wouldn’t trust with your wife.” -John Voelker