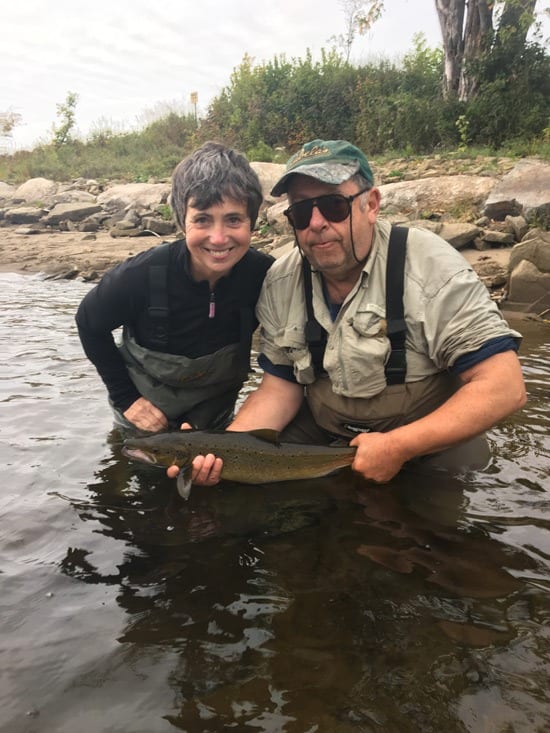 MIRAMICHI – Anglers should be aware that starting Tuesday, September 26 the annual NB Moose Hunt begins and lasts until Saturday September 30. This means anglers must be careful while out and about along the rivers, and would be wise to wear some hunter orange so as to not be mistaken for a “Swamp Donkey”.

Be careful using flies with moose hair in case some sharp-shooter picks it off your leader!

W. W. Doak and Sons in Doaktown said angling had been good about a week ago when there was a small raise in water, but since then the water is very much down again with only an odd fish being caught here and there. The positive part is that water temps have been quite good. Fish are congregating in deeper water and in the ends of running pools. If we can only get a good rain, fishing would improve immensely.

Flies of choice were Same-Thing-Murrays, Glitter Bears, WHITE-TAILED Green Machines, Ally’s Shrimps. and General Practitioners on nos. 8 & 10 hooks, along with a variety of Bombers.

Andrew Anthony of Ledges Inn in Doaktown and Mountain Channel in the Rapids area said fishing was slow with only a few fish being caught. The water is at its lowest this season and a good rain is desperately needed. Mountain Channel, however, was doing much better averaging a fish every day or two, and seeing some. There were some fresh fish dribbling through.

Flies of choice were White-tailed Green Machines, Green Smurfs, Undertakers, on no. 12 hooks in wets, along with Bombers.

Herb Barry Sr. of Herb’s Fly Shop on the Station Road in Blackville said there were some fish around in deeper water and there was an odd one being caught. However, the rivers were very low and in need of rain. He had gone striped bass fishing in the Miramichi area, but saw and caught none. But he did see salmon jumping which bodes well in that they are holding in tidal water waiting for a good rain so they can head up river,

Flies of choice were Same-Thing-Murrays and Bombers.

Curtis Miramichi River Outfitting in Blackville said anglers were catching a few, including some fresh fish, but generally, the water was low and fish were not moving very much,

Flies of choice were Preachers, Undertakers and Same-Thing-Murrays.

Jim Laws of Miramichi Hunting and Fishing in Newcastle, Miramichi reported generally poor fishing, with only a few fish being caught. The water was quite low, but cooler temperatures were a saving grace.

Striped bass were gradually making their way up river, although the numbers yet are small. Many more are expected as we move into the end of September and October which is the prime fall fishing time. The ones already back are mostly small thus far.

Syd Matchett of Trout Brook Fly Shop on the Northwest Miramichi said angling was very quiet. He added that there was more action in the graveyard near his shop than on the river. He noted that all the Crown Reserve Stretches are now closed as is the Miramichi Club. Most of the locals are more into the hunting mode with “Swamp Donkey Season” running From Tuesday to Saturday this coming week. With these Facts and not much water, needless to say, there are few anglers out. However, Grant Hendry did land two grilse this past week and raised a few moiré.

Flies of choice were orange bugs (much like a Green Machine, only orange).

Debbie Norton of Upper Oxbow Outdoor Adventures on the Little Southwest Miramichi said they were starting to see a few fresh fall fish. This past week they landed five grilse and two salmon, one of which weighed 15 pounds. \the water height was decent, although some tributaries were better than others. Water temps were good and the Fall colours were starting to kick into gear.

Flies of choice were Green Machines with flash, Blue Charms and Ally’s Shrimps.

So hopefully the tail-end of one of the hurricanes will give us a good drenching and trigger the Fall run which is most likely bidding its time in tidal waters waiting for the starter’s gun. Then we can get out to enjoy the Fall colours and get back “on the water”.

Thought for the Week: “Some men would rather be photographed with their fish than with their wives.” – Gwen Cooper and Evelyn Haas