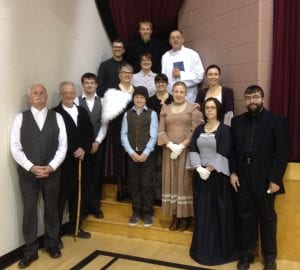 St Patrick’s Church in Nelson-Miramichi was a news-maker this past autumn due to the removal of its steeple. A dangerous lean to the steeple became a cause for concern and was deemed unsafe earlier this summer, forcing the church to close its doors for several weeks. On September 15, the steeple was removed and a cap temporarily set in its place. Hopes are high that the steeple can be returned to its place in time to come. Fundraising began with a variety show, organized by Layne Wallace, which gained more than $3000 toward the goal. Now, a play on the church’s history will be staged on the evening of Saturday, November 25 at 7pm, and the afternoon of Sunday, November 26 at 2pm at the Nelson Rural School (26 St. Patrick’s Drive). 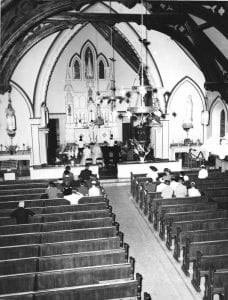 “St. Patrick’s 200 Years + : Eyes on the Steeple” was written by John Bosma, and adapted from a historical essay by Mary Gill. This two act play is a lighthearted look at the history of St. Patrick’s church, featuring a community cast. The play begins with a conversation about the church’s precursor, Malcolm’s Chapel, constructed by Scottish convert John Malcolm, for the use of missionary priests, in 1796. From there, a principal scene deals with Fr. Michael Egan, pastor of St. Patrick’s Church from 1833-1882. Father Egan came from Co. Kilkenny, Ireland and succeeded Rev. William Dollard as resident priest of Miramichi in October 1833.

Making Nelson his headquarters, he served the region that included Miramichi Bay in the East, the Miramichi River, and all its tributaries to the West. Fr. Eagan was a true shepherd of Nelson in those early years. As the play moves on, recreating the times and trials of Fr. Nicholas Power, Fr. E.P Wallace, and Fr. John Ryan. In addition, the role of the church in education, recreation and even in lives of individual parishioners are recalled, and venerable shepherds like Fr. Bernard Broderick and Fr. Reginald King are mentioned by the characters. 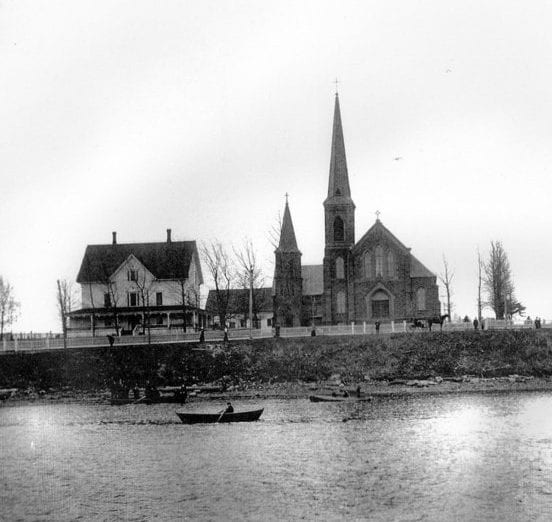 This production is, without doubt, an important event for St. Patrick’s parish. The remembrance of their church, and the people who served them, guiding them through the past two hundred years ought to make them feel no less pleased. Admission is a donation toward the restoration of the church’s steeple.