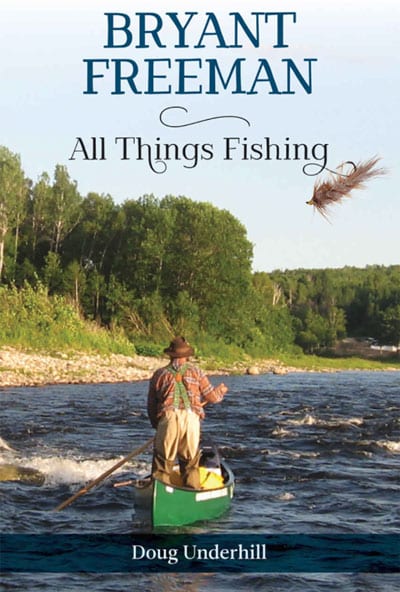 Miramichi author Doug Underhill and Nimbus Publishing have truly done the Atlantic salmon sportfishing industry a service by bringing the story of Bryant Freeman to bookshelves. A quiet, unassuming man, Mr. Freeman is well-known and loved by many who fish the Miramichi River and its tributaries. He is also well-known for his Riverview, New Brunswick fly-tying shop Eskape Anglers where, among other things, he sells his famous “Carter’s Bug” salmon fly.

However, Mr. Underhill’s book is not just a biography of Bryant Freeman, although it does trace his life from his childhood in Nova Scotia to his present home in New Brunswick, but we also learn about fly-tying, the changes to the salmon sportfishing industry over the decades and Mr. Freeman’s role in speaking out on the need for conservation and more catch-and-release measures so present stocks of salmon can thrive for future generations of salmon fishers.

A particularly interesting part of the book was a canoe poling trip up the Miramichi undertaken by Mr. Freeman and Dewey Gillespie (another Atlantic Salmon Hall of Famer) in 2009. Dewey set out alone starting at Chatham and making it as far as Boiestown, which he estimates took about forty hours:

However, once he reached Boiestown, he realized he did not know the river above that point, and he needed someone with him who did. As well, his wife was worried about him travelling alone. 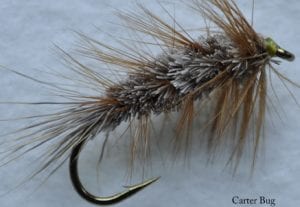 “I needed someone with me who knew the river and was crazy enough to pole up the river with me,” says Gillespie. Enter sixty-eight-year-old Bryant Freeman.

The story continues as they leisurely make their way upriver, stopping to talk with folks along the way and recording their travels. It’s a very charming and interesting voyage to read about.

Bryant Freeman: All Things Fishing contains black and white as well as colour photographs; particularly beautiful are the ones of flies he has tied and those of him fishing and canoeing on the river. This is a book that sports fishermen (and women too, whom Bryant encourages to get involved in the sport) and all outdoor adventurers will welcome.

Doug Underhill is a sports/outdoors journalist and was inducted into the Atlantic Salmon Hall of Fame and Miramichi Sports Wall of Fame. He lives writes in Miramichi, New Brunswick. Bryant Freeman is his thirteenth book. His website: www.dougunderhill.com